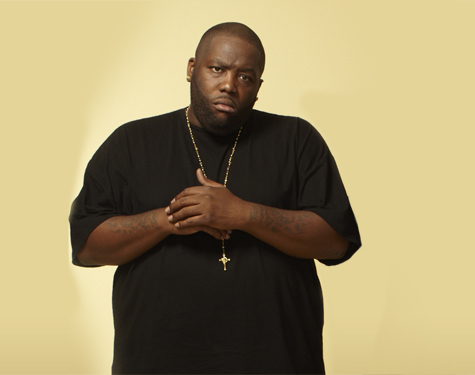 Killer Mike Speaks without a Net

As rumors circulated that Ronald Reagan’s hologram would deliver a speech at the Republican National Convention, the significance of Killer Mike’s “Reagan” magnified to the level of, “If you hear one song this year…” Reagan remained dead, leaving us with one last enemy in the cross hairs: his legacy.

With the future of the Dungeon Family, an Atlanta-based collective comprised of Outkast, Cee-Lo and Goodie Mob, in limbo Killer Mike emerged from its shadows this year with R.A.P. Music. His collaborative album (also featuring T.I., Bun B and others) is one of the most talked about records of the year, garnering a comparison from Pitchfork Media to Ice Cube’s classic AmeriKKKa’s Most Wanted, thanks to Bomb Squad production meets doom-heavy space funk beats from El-P. Killer Mike holds no punches on R.A.P. Music. We discussed his sneaky left over the phone; Mike stating “When I write I try not to put parameters on myself. There will be things that feel like they need to be said.”

The album is an eardrum assault, but on “Reagan” the tension is ripe for El-P’s cinematic builds that culminate to Killer Mike’s grand proclamation, “I’m glad Reagan dead.” The statement perks the ears as the beat drops out entirely to alert all in earshot of Mike’s definitive four words. It’s bigger than politics or hip-hop, though. There’s far more to take from “Reagan” than a battle-cry against the idealized Great Communicator as Mike calls out hip-hop for being part of the problem. The problem being puppets with corporate-interest hands stuck in their backs. To Mike there’s little difference between a talking head reading teleprompters and a rapper glorifying gang life and the consumption of liquor brands. The rapper is just a man with a fancy chain and the president is just a man in a chair.

The track “Reagan” deals a lot with the breaking down of ideologies, particularly addressing how Reagan was an actor-in-chief but it goes beyond him. Is there a rap equivalent, either a figure or ideal that you’d like to see dispelled?
When I’m talking about Reagan being dismantled it’s less about the human being that was Ronald Reagan. Because he didn’t have power, the corporations held the power. It’s the Reagan ideology of being a puppet to a puppeteer that is corporate interest over human interest. So for me, the Reagan in hip-hop that I’d like to see destroyed is the value of corporation’s favor. As MCs, we should not be pandering to these corporations. We should seek the people we rap to and we rap for.

When I rap my interest is pleasing the people I rap for and not pleasing a corporation, who may or may not give me money. That doesn’t mean I don’t take corporate money. Corporations like Pitchfork [Media] and YouTube are the reasons I’m entitled to that. But they came under the understanding that we want you to make the video that merits this music. A television corporation gave me the freedom to make a rap album I’ve always wanted without interest of how to get it on the radio.

Have you followed the statements Kendrick Lamar made regarding his disinterest in voting in November?
Yeah, I heard about it. Kendrick is in his early twenties. That’s how you feel.

My personal philosophy, even when I was in my teens, is… well, my grandparents were from segregated communities. So for me, voting is a blood oath. I knew the people that suffered blood at the hands of dogs and police forces. I vote as a blood oath. I vote for the same reason Jews hold true to Israel. There’s a blood oath that’s born out of a suffering that’s unimaginable. It’s not saying I agree with any policies there or anything like that. I understand a nation’s adoration and allegiance born out of a suffering called the Holocaust. So for me, I take voting with that sincerity because what happens to the African on the continent of the Americas has been truly a holocaust. Voting represents some measure of victory in reclaiming your humanity through that. It is a moral issue. It is a social issue. I will always vote.

So if and when real revolution ever has to happen, I’ve exercised the right. If that no longer works for me, then I have the right in this country to bear arms and fight for my freedom to the very death. That’s how strongly I feel.

Your music videos from the R.A.P. Music record have been very cinematic. Is this a lead up to you looking at movie roles?
I’d like to. I don’t know the realities of doing movies, but I’ve seen a lot of big black guy parts I know I can nail and even do better. I’ve done a few indie movies on the street side. It’s been a cool experience I’ve met a few black actors that have encouraged me to try something. At some point I’m giving it a try.

I’d gotten bored with videos in the rap genre. I wanted to bring cinema to my videos, so hopefully it’s something I will continue to do. It costs a little more. I think rap deserves it though.

Are there plans for a third video from R.A.P. Music?
“Reagan” is already done and “JoJo’s Chillin’” is the next one we’re shooting. Expect a video for “Butane” too. I’m going to finance another video too. I haven’t decided which one yet. I want to shoot “Don’t Die,” but you’re talking at least 30 grand for that. We’ll get it figured out.

You’ve mentioned that you and El-P are back working together. How’s that coming along?
El told me after the last record that this is just the beginning. These beats were just the ones he knew we were going to do. The next beats, the ones we’re going in on and the ones he’s playing for me, the ideas he’s coming with are pushing the limits of what we just did. I’m telling people don’t expect to hear me without El for the rest of my career.

There was also talk that one of the albums will be you and El-P sharing the rapping responsibilities. Is that still happening?
Exactly. That’s the next thing. The EP of me and him going back to back. Then, we’ll work on the album. I want to do a R.A.P. Music 2 and I’ve got to get a Pledge 4 [mixtape] going. Then, I’m going to do Elegant Elephant. That’s three solos for me. A lot of music in the next two to three years is what I’m anticipating.

Since you’re touring with GZA, what song of his are you looking forward to hearing him perform live every night?
He’s going on tour to do the Liquid Swords album. I don’t think it’s appropriate to try to pull any one track out of that. I’m going to be one of the first people on Earth, probably since his promo tour to watch him do that album. That’s what I’m stoked about. I pray that Killer Priest joins us at some point because “Basic Instructions Before Leaving Earth” is going to be incredible. I’m going to smoke weed every night and stand in the crowd to hear that album.

Being someone who can articulate the difference between being a sexist at times and a full-blown misogynist, what measures do you take when you write to keep that concern for public perception in your songs?
A lot of times you’ll say bitch unnecessarily. You can go back and you can fix that so that a clean version doesn’t need to be made. And it will sound doper or slicker.

It’s instinctive. It’s like pornography. You can’t really define what it is; you just know when you see it. You know when certain lines come to your head and it’s like, no that’s too far. My approach is I don’t belittle. I give opinions. I’m not here to degrade you. I’m not here to be over you. I’m not here to rule you. I can’t readily say what’s sexist or misogynistic. There’s a very thin line. I might fall into the sexist pail, as a man I may step there, but I don’t see women as less than or incapable of. I don’t tread that path.

And I say this as I look at “The Birthday Song” video by Tity Boi. [Sings] All I want on my birthday is a big booty ho.

Killer Mike will open for GZA, who will be performing his legendary Liquid Swords album, at Ace of Spades in Sacramento on Sept. 26, 2012. This is a hip-hop show you won’t want to miss. Go to http://www.aceofspadessac.com/ for more info and to purchase tickets.