Lights hits the road running on the strength of her latest album, Little Machines

Touring is difficult in the winter—even for a Canadian. Just ask Lights (born Valerie Anne Poxleitner), who set out on the road during a record-breaking cold snap for a good portion of North America. However, when Submerge caught up with the vivacious singer/songwriter, she was nestled in the relative warmth of the Lone Star State.

“We’re in Dallas,” she enthused. “I can’t complain. It’s a little rainy, but it’s the first warm day.”

Not only was it warm…ish, but she was also getting geared up for a sold-out show.

A warm reception is nothing new for Lights. She reported that a stop earlier in the month in Minneapolis yielded similar results. But in speaking with her, it wasn’t difficult to imagine how she’s been able to charm so many audiences.

Lights’ music exudes her personality: infectious, open and brimming with confidence. Her latest album, 2014’s Little Machines, features her emphatic vocals taking charge of a power-packed musical backdrop that at times seems to toe the line between EDM-informed pop and new wave. It’s her first collection of new material since 2011’s Siberia. In the time in between, she got married to Blessthefall’s Beau Bokan and the couple had their first child. However, she also struggled with a bout of writer’s block that saw her expanding her horizons as an artist in order to overcome.

“I think that I had to just not think about music for a little while and focus on other aspects of my creativity,” Lights explained. “Creativity as a whole is a muscle, and if it doesn’t get practice, it gets weak, and you need to broaden your perspective of what your art is.”

She expressed herself through painting and poetry, she said, and also took walks in order to stoke the flames of her creativity. Luckily for her fans, it worked, and the result was a sort of songwriting eruption.

“I ended up writing 43 songs for the album,” she said. “At the end of 2013, I was like, wow, there are a lot of songs here. Not even a month later, we were in the studio working on the album. It’s just a part of maturing, just trying different angles and seeing what’s going to fit. Now I’m more inspired than ever.”

Later in spring, Lights will head to Sacramento for a show at Ace of Spades on April 16, 2015, in between playing both weekends of Coachella, along with every other musical act you’re pretty much dying to see live. In the following interview, we discussed a couple of the songs on Little Machines as well as what it was like coming of age in the music industry. But first, we got down and nerdy.

I love the story, the characters, everything about it. What about yours?
I have to say the XIII series—XIII, XIII-2 and Lightning Returns. It’s because I love Lightning. She’s such a badass, and I got my haircut like hers…

That’s what I was leading up to. I thought your hair looked like the character’s.
Yeah! She’s a role model of mine, and she’s not even real!

Are there any bands you’re hoping to catch while you’re at Coachella?
On the day we’re playing, The War on Drugs is playing, and I really love that album, so I’m going to try to see them. I’m also going to try to see Drake… I don’t know if I’m going to bring a flower crown or not. Is everyone going to wear a flower crown? Is that the thing you have to do when you go to Coachella, or put things on your forehead? I don’t know. Maybe that’s how you prepare for Coachella–put a jewel on your forehead and a flower crown [laughs].

I read that you were first signed when you were 15. That must have been a surreal experience, basically growing up in the music business.
It’s kind of funny… I started writing when I was 11 and producing my own stuff when I was 15. By the time I met my first manager and got my first development deal when I was 16—I met my manager when I was 15—it was kind of like instantly de-glamorized for me. You think when you get signed, you’re suddenly famous. I had this fantasy when I was 13 that I would go snowboarding and everyone would recognize me at the slopes. In the first few months, though, it was de-glamorized for me. That’s not a sad story. It’s probably a realistic story. I was rejected a lot in the beginning; people didn’t get it. I went around to a million different CEOs of record labels, and people didn’t understand it. After a while, I got a development deal, and people tried to figure out what your sound is and who’s going to get behind you. Then the merger with Sony and BMG happened, and I got dropped from that, but I got signed to a publishing deal and started focusing on songwriting. It was a lot of traveling around between the small town I lived in and Toronto, and sitting in hotel rooms writing and trying to catch up on school work. It wasn’t a surreal experience, because it was a lot of hard work and more of a grind, really.

You said it de-glamorized the whole thing for you. Do you think that helps keep you grounded, because you saw that it’s not just about talent, but it’s about a lot of things?
For sure. It instantly became not about fame and not about money. It’s about doing what makes you happy, because you have all these different people around you that have a different idea of what they think you can be. I have a pretty good sense of myself, and I’m pretty confident, even when I was younger, and I was so disgusted by the idea of somebody else trying to create a persona for me, and I think that was important because, you know, nobody can tell me what I am. Because of that, I really had to search out where I belonged in music. Even now, doing what I love and creating music that makes me happy is the most important thing.

Your latest album, Little Machines, is really good. I really liked the song, “Running with the Boys.” I thought the lyrics had a real nostalgic quality to them. I was hoping you could talk about the writing of that one a little bit.
Thank you! Yeah, that’s one of my favorite ones from the record, because it describes that mindstate I was in when I rediscovered the inspiration for creating music. It went back to the beginning days when I first started producing my own stuff and the limitless qualities of creativity. You could be whoever you want, sound any way you want. I never want to lose that, but the more you get to know about the industry—or anything in life—once it gets de-glamorized…you know, the prospect was always more beautiful when we were younger… And that’s how we should keep it, how beautiful life could be, and that’s what that song is all about.

Based on what you were saying earlier, there’s a song on your album called “Muscle Memory.” Is it about what you were saying? That creativity is a muscle?
Ironically, “Muscle Memory” is actually about the experience I’m going through of being a musician married to a musician. We’re away from each other all the time. It’s the idea of someone’s ghost being there even when they’re not near, thinking they’re there but they’re not. I began writing that song when I was in the middle of being really frustrated about music, and when I first finished it, I didn’t like it. I showed it to the team and the label, and I was really embarrassed, but everyone loved it. I was like, “Really? You like this song?” I had to really trust everyone and go back and listen to it and hear it with new ears. That’s something with having a lack of inspiration—everything sounds like crap. It’s not lack of talent, but lack of vision of seeing what’s actually good. That’s an example of something I went back to later, because everyone was like, “No, you’re crazy. This is a good song.” And now it’s one of the favorites on the album. When we play it live, it’s so dynamic and energetic. Right now it’s our show opener. It’s funny how things can come full-circle after a lack of inspiration.

It sounds like you have a bunch of songs that didn’t make the album that you can work on too, if you wanted.
I’ve always had excess songs for every album. I’ve probably written 10,000 songs in my life, but that’s the thing with music, and I think that’s good advice for anyone starting out… You can’t hold anything too dear, because not every single song that you write is going to be good. You can’t write 10 songs and say, “That’s going to be my album.” You have to get past the blasé stuff to get to the really rich stuff, and that’s just part of it. It’s kind of sad, because I’ve started so many songs that have just disappeared, because I didn’t have anywhere for them to go, and I’ve forgotten. And that’s OK. You can’t really go back to a song that’s five years old and have it represent where you’re at in life now.

See Lights live in Sacramento when she plays Ace of Spades on April 16, 2015. Saint Motel will also perform. Tickets to this all-ages show are $15. For more information and to purchase tickets, go to Aceofspadessac.com. 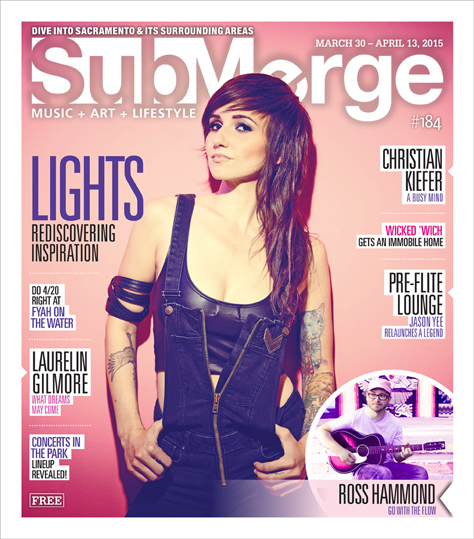