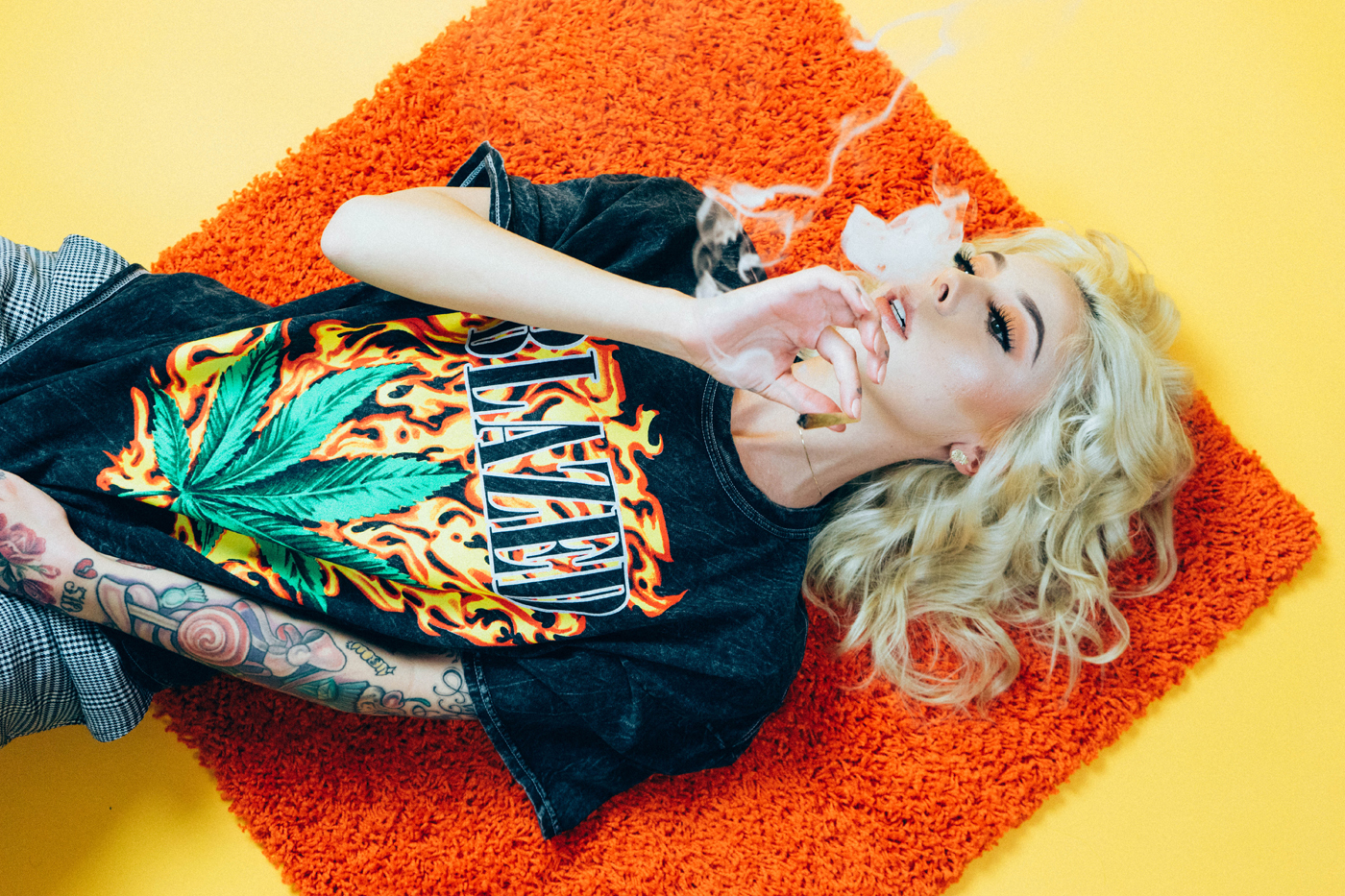 Talking to rapper Lil Debbie on the phone is like spending a casual hour on your couch talking to a close friend you don’t see often.

When we thought we’d covered everything, like her new, yet-unnamed EP dropping this summer and launching her marijuana business, Kesha’s court case came up and we had to ruminate on that for a bit before discussing women getting treated and paid unfairly and how that’s affected Lil Debbie as she chased her dreams.

The 26-year-old Bay Area-born rapper has been in front of the Internet rap scene for 10 years, first with Kreayshawn and V-Nasty in the White Girl Mob, and later as a solo artist, releasing the EP Queen D in 2013.

That year, the younger Lil Debbie sat down with LA Weekly in her then-typical way: long acrylics, lotta bling, Cleopatra liner, high. She told the Weekly she saw herself flying off to Italy in her own private jet in five years.

Lil Debbie is just as bold and ambitious today, still shooting for that Billboard Top 100, radio play and private jet, but she’s also more comfortable in her own skin, and more of a businesswoman. She’s pared down her Instagram/selfie presence, opting instead for professional photo shoots with visual creatives to put out work “that touches people,” she says.

A day before this interview, she did a photoshoot with Vans, a company she respects. Last month she performed at an all girls show sponsored by Vans at SXSW.

“It’s crazy to be there [at SXSW] because there are five girls to every 50 dudes,” she says of the rap scene at the music festival. “Male rappers are so egotistical. They’re just about who is cool and who is not. Who is on the boat, who is not. I’m a bitch but I’m a bitch that doesn’t care about all that, genuinely. I’m not about to hang out. I’m about self-care and self-preservation. Some of the things I see are very childish. When the rap industry starts supporting women in a more positive way, I’ll come and hang out. I’m one of the most unhyped female artists. I won’t try to hang out with all the newest artists. I do this and it’s a talent of mine and it’s a business. It’s not a show. It’s not about that. Every time I put a project out I’m progressing, visually and lyrically. As long as I’m happy and proud of the work I’m doing, that’s it.”

She is also more aware of the pressure and scrutiny on artists online. It’s bothering her in a very adult way.

“People are disengaged … what’s the word? Desensitized,” she says. “Nothing shocks anybody anymore. ‘Oh you put that out, what’s next?’ It’s unrealistic. People want to see the process but to me the process is a very personal thing. I came up on the Internet with Kreayshawn shooting party videos. It went from ‘they’re changing the world’ to now being desensitized. There’s no shock factor in anything. No excitement.”

Instead, Lil Debbie says she’s scared to pour her heart out on the Internet because she’s watched the public tear apart rappers like Iggy Azalea and Kehlani.

“I’m excited but very confused,” she says about releasing her new album. “I’m a woman, I’m in the middle of my twenties, and as a woman, as a music artist it’s hard. Some of the things I go through personally I can’t put in my music. With the group I’m working with, they might not understand it, they might not get it. Like, ‘Why is she saying this, she’s a rapper?’ It’s hard but also about experiencing and growing as a woman. I’m confident it’s going to be good.”

She hinted the album will be less about smoking weed, like her last EP Home Grown, and more about her being a boss bitch like her fans asked, as well as hit on some serious subjects.

“I’m a rapper but I’m not in the streets at three in the morning selling dope, I’m not riding around with a gun in my car,” she says. “I write about me being a single, independent woman. I want to empower other women. And I am bossy. I talk about the support I don’t get. Talking about how I’ve done this for years and I don’t have support from the radio as of yet. Who knows? It’s a hard game being a woman in a rapper’s world. In a man’s world. Should I be sexual, should I not be sexual? What should I do? Who am I as a rapper?”

Lil Debbie raps about drugs and emotions, and taking care of yourself, another subject she’s not sure will go down easy.

“I went from sippin’ syrup and poppin’ Xanax to only smoking weed,” she says. “I have a weed line and I have edibles and I do my best to put out a good product. Some fans are like, you need to put your acrylics back on. People think Lil Debbie needs to have acrylics. No, Lil Debbie is taking a break and is growing her natural hair back and is growing her nails. So that’s not what you’re gonna get and I’m sorry. I think it’s hard to see an artist come out like that.” 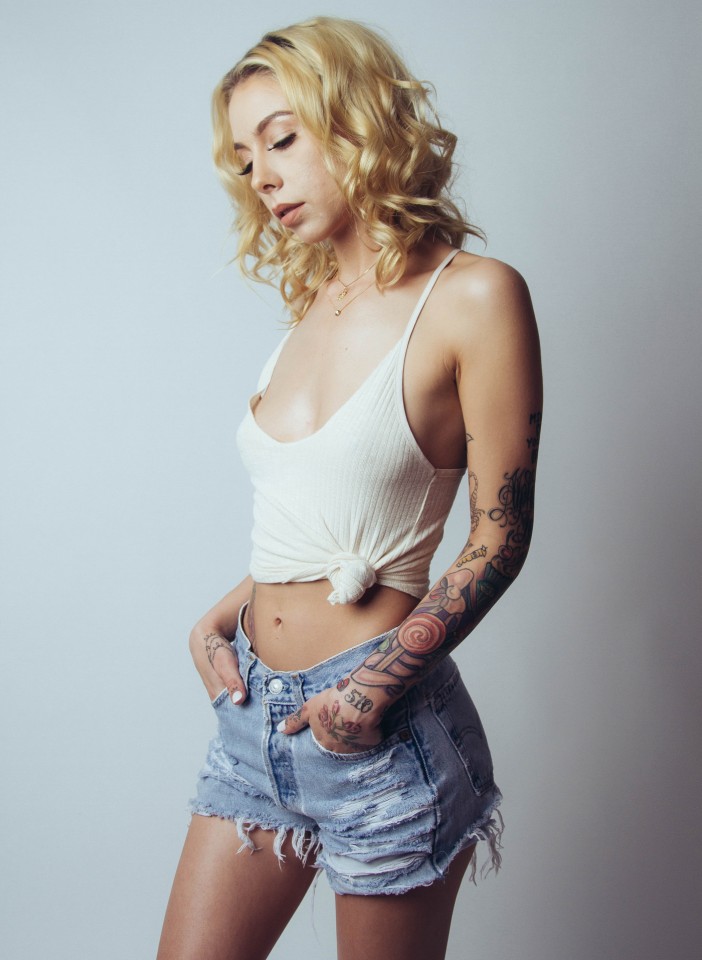 Her first overseas shows are a testament to this raw Lil Debbie. French rapper Wacko brought her out earlier this year to do a song together and play shows in France and England.

“Europe opened my mind, opened my heart,” she says. “I’m enthralled in the romance. People in my world don’t get to experience romance. It’s all pimps and hoes and ‘bitch bitch bitch.’ Just to be around flowers, and roses and the Eiffel Tower, to be around class is a breath of fresh air. It changed my outlook on everything.”

One of the most admirable characteristics of Lil Debbie is her drive to keep trying to change the world she works in, especially for girls, whether it’s in the music industry, in fashion or in weed.

“I want to prove to girls that even though it’s a long struggle there’s a good outcome,” she says. “For me it’s about being happy. I want people to say, ‘She’s innovative, she’s an activist, she’s strong.’ That’s what I want. To just be happy. If I ended up being like Nicki Minaj or Rihanna, that would be a beautiful thing. It scares the shit outa me. But I still want it.”

Some of that drive comes from her upbringing, and the difficulty of making a career in her first love: fashion. Her education includes attending the Fashion Institute of Design and Merchandising in Los Angeles.

“I’ll always love fashion and fabric, but that’s as fucking hard as the rap world,” she says. “It’s not fair. I grew up in that shit. My mom was a child clothing designer. She would put me to bed and would work all night while I was sleeping, then finish when it was time to take me to school in the morning. She was selling shit in Nordstrom and she couldn’t make it. This was before the Internet. Having your own fashion line and selling well is truly a blessing. It’s even harder now and things are getting watered down and washed out. But I’ll always love fashion.”

Lil Debbie says the weed industry isn’t any better for women. It took her a year to get a logo and six months to get the packaging done, and she blames it on the lack of trust and interest “the boys” running the industry had in her work.

“It took that long to get someone to trust me and help me grow my weed,” she says, angrily. “Boys love boys. Boys are enthralled by boys. That’s the reality. But I want to grow good weed, and you know what they said to me? They said they could give me a small percentage on my sales, and I was like, what?!”

She eventually found a good group to work with and create her line, and they hope to have both weed and edibles (strong ones, she warns) available at events and clubs this summer.

“It’s a hard market to break into and some people have been doing this for years,” she says. “It’s very different than buying from Joe Blow on the street, buying from the club.”

Judging from her focus and attitude, no matter what Lil Debbie succeeds in, she’ll be in the spotlight, underground or otherwise, for a while.

“I have three or four more hard years to put in before I could think about being a star, especially as a rapper,” she says. “Does Lil Debbie want certain things and gets sad? Yeah. Is she still a boss ass bitch? Yeah.”

Catch Lil Debbie as part of the Califesto Pre Party Friday April 15, 2016 at Ace of Spades, located at 1417 R Street in Sacramento. Tickets for this all-ages, 7 p.m. show—which also features The Luniz, Roach Gigz and more—are $25 in advance ($30 the day of the show) and are available online at Aceofspadessac.com

***UPDATE*** This show has been moved to The Boardwalk, located at 9426 Greenback Lane. All tickets honored, same set times and same lineup! 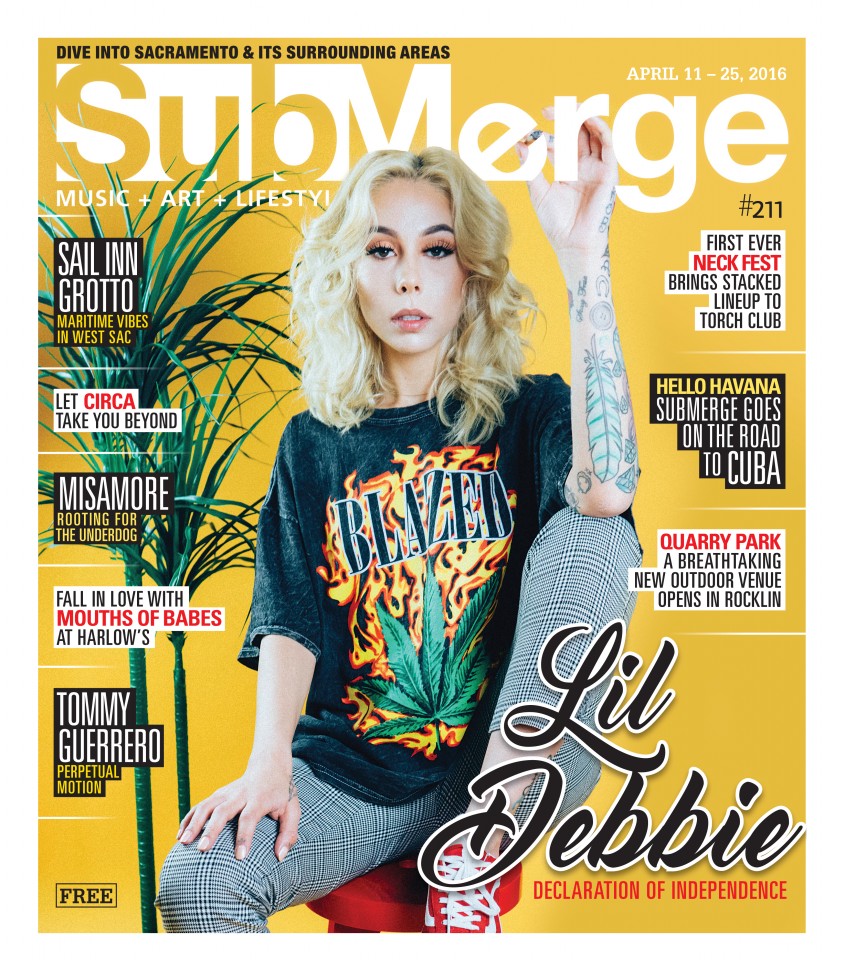