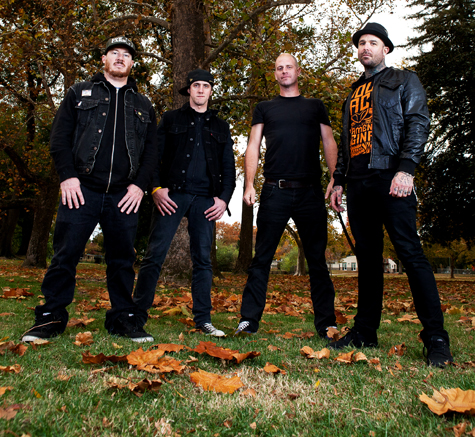 Although they may never have sold a million records, traveled to gigs via private airplane or experienced much else commonly associated with rock stardom, Sacramento-based Lonely Kings have long since established themselves as underground rock legends. They are a “band’s band,” if you will, and chances are, some of your favorite artists from back in the day have these guys’ cell phone numbers on lock. Formed in the early ‘90s by vocalist/guitarist/primary songwriter Jake Desrochers and drummer Jason Wilkinson (the two remaining original members; the group is now rounded out by bassist Emile Janicot and lead guitarist Johnny Deluca, both of whom have been in the band nearly a decade), Lonely Kings have had a long history of flirting with major success, coming ever-so-close time and time again to “making it big” and reveling in fame like so many of their close friends have. But they’ve never bitched or complained too much, never called it quits or took an elongated hiatus. Lonely Kings have always been there, a constant force in underground rock music and a fine example to bands young and old.

After performing countless self-booked tours and cutting endless demos and 7-inch vinyl splits throughout the early and mid-‘90s, Fearless Records released Lonely Kings’ debut full-length album What If? in 1999 to much critical acclaim. This led to tours with Agent Orange, A Static Lullaby, The Bled and others as well as dates on the infamous punk rock summer camp, the Vans Warped Tour. In 2001 the band went back into the studio with Cameron Webb (Social Distortion, Strung Out) to record their sophomore release, Crowning Glory, also released via Fearless Records in 2002. Other notable releases include two split CDs, one for Sessions Records and one for Coldfront Records, The Ides of March (out 2003 via Rise Records), and The End of Forever (out 2006 via Flight 13 Records). All in all, the Lonely Kings have completed 15 U.S. tours, been to Hawaii twice, Canada four times, Europe seven times (once with Hot Water Music in 2005), the United Kingdom four times (once with the Misfits), and a bunch of West Coast runs. They have become band buddies and/or have shared the stage with groups such as AFI, Papa Roach, At the Drive In, Thursday, Alkaline Trio, Strung Out, Sublime, Saves the Day–the list goes on and on.

Submerge recently sat down with Desrochers and Janicot to talk about their upcoming full-length record, American Heartache, their Rock for Tots charity gig at Ace of Spades on Dec. 23, 2011 and to bullshit about the band’s past.

I’m curious, having toured overseas so much in the past, what was the language barrier like?
Emile Janicot: I mean, I speak French and Spanish and a little bit of German. But really you just kind of speak rock ‘n’ roll, that’s what people know all over, you know?

Seeing so many groups around you “make it big” commercially, bands like AFI, Papa Roach, etc. What’s that like? Are you ever envious or jealous?
Jake Desrochers: It hurts every time for sure. Nowadays not so much, but when you see bands like you take off in the same year, the year that you’re the hottest your band has ever been… It was harder back then, because we were right there at the cusp.

And working hard, too.
JD: Yeah, exactly. Like we got bumped on a tour with Face to Face for Alkaline Trio. We got bumped on a second AFI tour one time because they took out Jimmy Eat World when they started to pop. So we’ve lost out to some amazing bands on some of those tours that could have broke us. Looking back, it’s just amazing to have been in the ring, but I was fucking pissed because I needed it. I don’t know though, it’s like we still get good gigs, so you could take it two ways. Some of these bands aren’t even around anymore.
EJ: A lot of these bands too like Papa Roach, Hot Water Music, AFI–we’re all friends with them. We get into all their shows free, they respect us, they’re always like, “We love your music!” But it’s hard to be like, “Give us a show. Give us this, give us that.”
JD: And knowing their lives, I don’t envy it sometimes. It’s super hard. I just try to feel like God or whoever is in charge had a different plan for us or for me personally, and just try not to fight it too much and to be grateful for what I do have, which is an amazing group of dudes that play quality American rock. We’re still doing it. Like, what the fuck? It’s crazy, after every practice I’m just like blown away.

I’ve always thought that Lonely Kings were one of those bands that has just as much “street cred,” if not more, than bands that started in the same place you did but made it huge. Would you agree?
EJ: We do have that!
JD: I don’t think we’d still be here if we would have gotten famous when we wanted to.

Yeah, how things would have changed if a major label came knocking? A lot of times it ends up being not the right move for the band.
EJ: We knew bands that did that; they got good really quick, they got signed and sponsored and this and that. We’d have already toured with them, and then they’d be done in two years. We’re still here.
JD: We’ve seen bands come and go. [Laughs] Hell, we’ve seen genres come and go.

Your band has always had a sort of rough-around-the-edges vibe. Has that been natural? Were there ever periods where you were trying to polish it up more?
JD: It wasn’t purposeful. Every record I’ve tried to make some pop masterpiece and to write that golden hit in the sky. I’ve tried every single time. But we are so rough around the edges, and I can’t write anything that doesn’t mean something to me. I can’t be too tongue in cheek, I can’t write all open chords, I have to keep it weird. As pop-y as it is, I want it to be just as weird, just to reflect what we’re going through. I just always liked bands’ bands in the way that there’s something raw to it. Maybe it’s my influences. But trust me, you think Fearless didn’t want to hear a hit? The second record, they wanted that to go, that was the whole plan. And they were sitting there in the studio screaming at me to come up with something. And then here I am writing it in Latin or some shit, shooting myself in the foot creatively, but I thought it’d be cool because it would be different. But sometimes what is different isn’t what’s cool.
EJ: Also, on our records we like to put out stuff that we can recreate live. A lot of bands have backing vocal tracks, backing guitar tracks and all kinds of triggers and stuff like that. We don’t use any of that, we are straightforward.

How does the material on American Heartache compare to past Lonely Kings releases?
EJ: It’s more mature. Jake and I have really found how to complete our songwriting craft, to strip away all the layers and all the bullshit. Only the best songs are going to make it. Some of the songs are different, but it’s going to be a Lonely Kings record for sure. We haven’t even heard the whole thing ourselves. All we hear are bits and pieces that Michael [Rosen, producer/engineer] sends to us.
JD: I don’t even care if it takes off or does well for us. I know I will have done my best work. And the fact we had to do it sporadically has made the songs so much better, because we’ve shed a couple every step of the way and really peeled the layers back to just quality shit. It was a two-year recording process, basically. It was as if someone gave you a studio for two years and told you to write a record.
EJ: We probably did 25 to 28 songs for this record, and there’s only going to be 10 or 11, maybe 12, on it. We might let Jake do an acoustic one by himself. It’s been a long haul, but it’s going to be worth it.

This record is yours in that you own the masters, not a record label. When it’s totally done are you going to pull in favors from old friends and/or shop it around? Or, do you think you’ll put it out yourself true DIY style?
JD: If it has to be, but it’s pretty freaking good so I’m hoping that someone will be like, “Damn!” and the songs will talk for us. 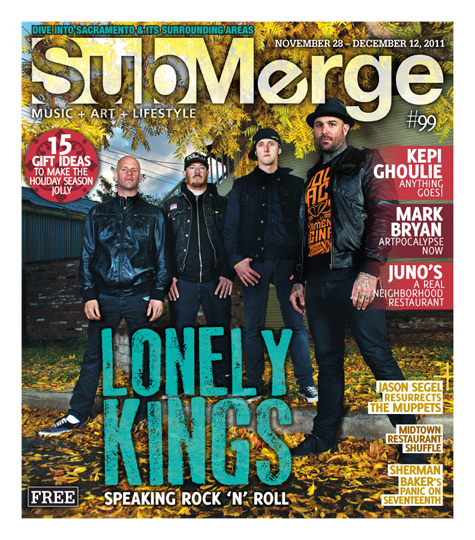 Look for American Heartache to be released sometime early next year. In the meantime, see Lonely Kings headline Ace of Spades on Dec. 23, 2011 at the bands’ sixth annual Rock for Tots, a toy drive for Sacramento Salvation Army. Bring a toy and receive a raffle ticket for prizes from local vendors. Doors open at 6:30 p.m., and the event is all ages.