You Be You • Lovelytheband, an Overnight Success, Years in the Making 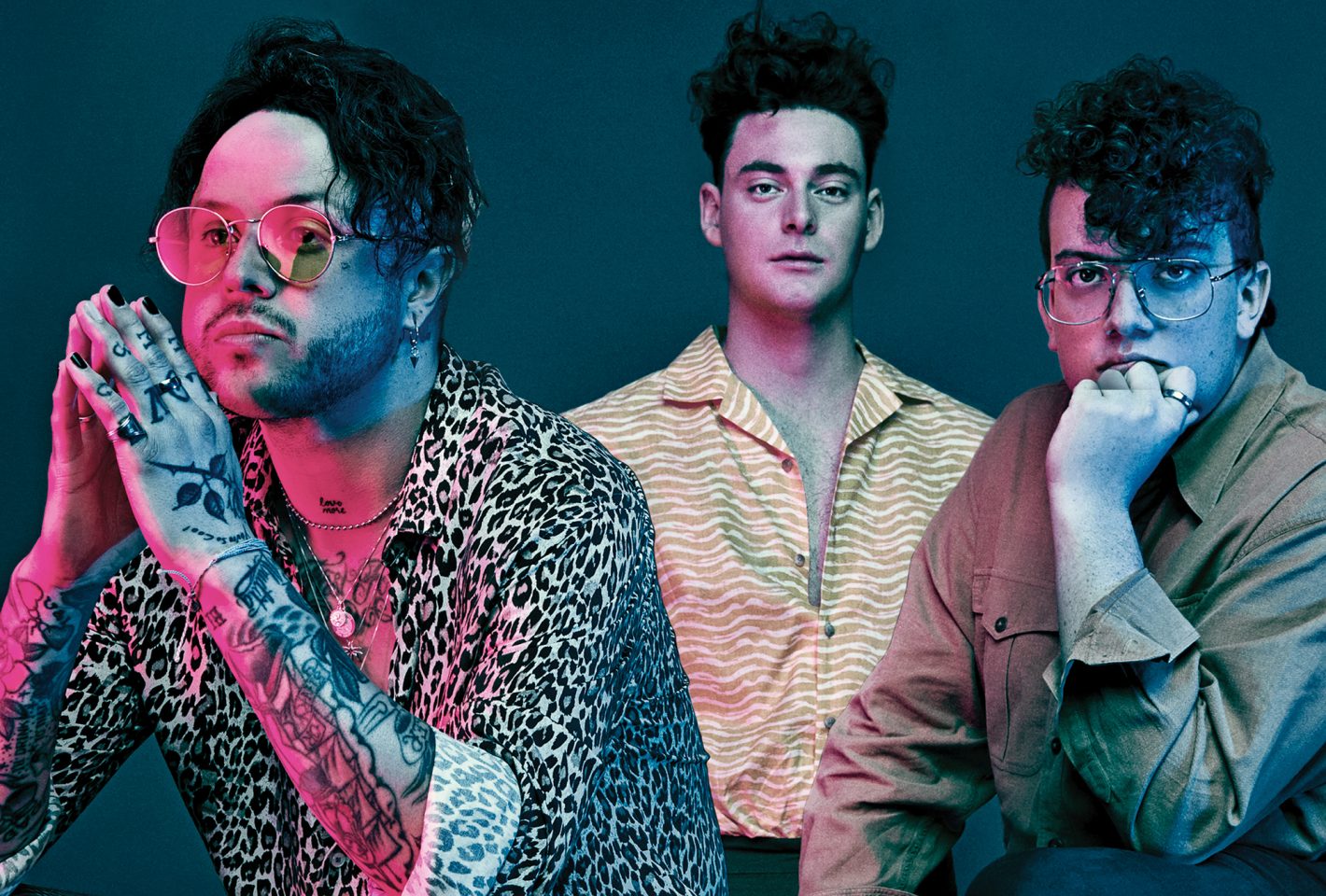 To the casual listener, Lovelytheband may have appeared virtually out of nowhere. The band formed in 2016 and just a year later, their single, “Broken,” with its almost diabolically catchy chorus, was topping the Billboard Alternative Chart.

“Everyday our minds are playing catch-up to what we’re doing,” Lovelytheband’s frontman Mitchy Collins admits over the phone from a tour stop in Omaha, Nebraska. “We’re waking up every day in a new city, being told where to go.”

However, the story of the band’s overnight success is somewhat misleading. While it’s true that things moved quickly for Lovelytheband, Collins’ path as a musician and songwriter has been a long journey.

“I feel like success is a glacier,” Collins says. “People only see the top. They don’t see the bullshit you went through in the 10 years prior.”

Perusing the internet reveals a glimpse into Collins’ early forays into the music industry. A video posted to YouTube entitled, “Welcome to My Town,” features a Collins taking a tour of his hometown of Bedminster, New Jersey. There are interviews with his friends, his parents and even a visit to his favorite pizza place.

“I knew I would make it work one way or another,” Collins tells Submerge over the phone. “I never had a back-up plan.”

The video was made while Collins was in the band Oh Honey. The project, based in Brooklyn, dissolved in 2016 when he and bandmate Danielle Bouchard split up. Not long thereafter, Collins found himself in West Hollywood where he met guitarist Jordan Greenwald. He and Collins then hooked up with drummer Sam Price via Instagram, and Lovelytheband’s lineup was set.

“I knew this was going to be it. There was no wavering for me,” Collins says of his resilience in navigating the music industry. “I knew it was going to click one of these days. It’s like statistics, man, like getting up to bat. Eventually, you’re going to get one that connects. If you keep at it, and keep making shit you’re passionate about, you’re going to get one that connects eventually.”

Lovelytheband’s success thus far shows that fans are connecting with the band’s infectious hooks and moving lyrics. The group followed up their breakthrough EP, Everything I Could Never Say … with their debut full-length, Finding It Hard to Smile, in 2018. In the following interview, Collins gives us a glimpse into his songwriting process, discusses the surreality of being tagged as a mentor for the current season of American Idol and explains how Lovelytheband’s latest single, “Maybe, I’m Afraid,” sheds a light on the struggles on America’s LGBTQ community. 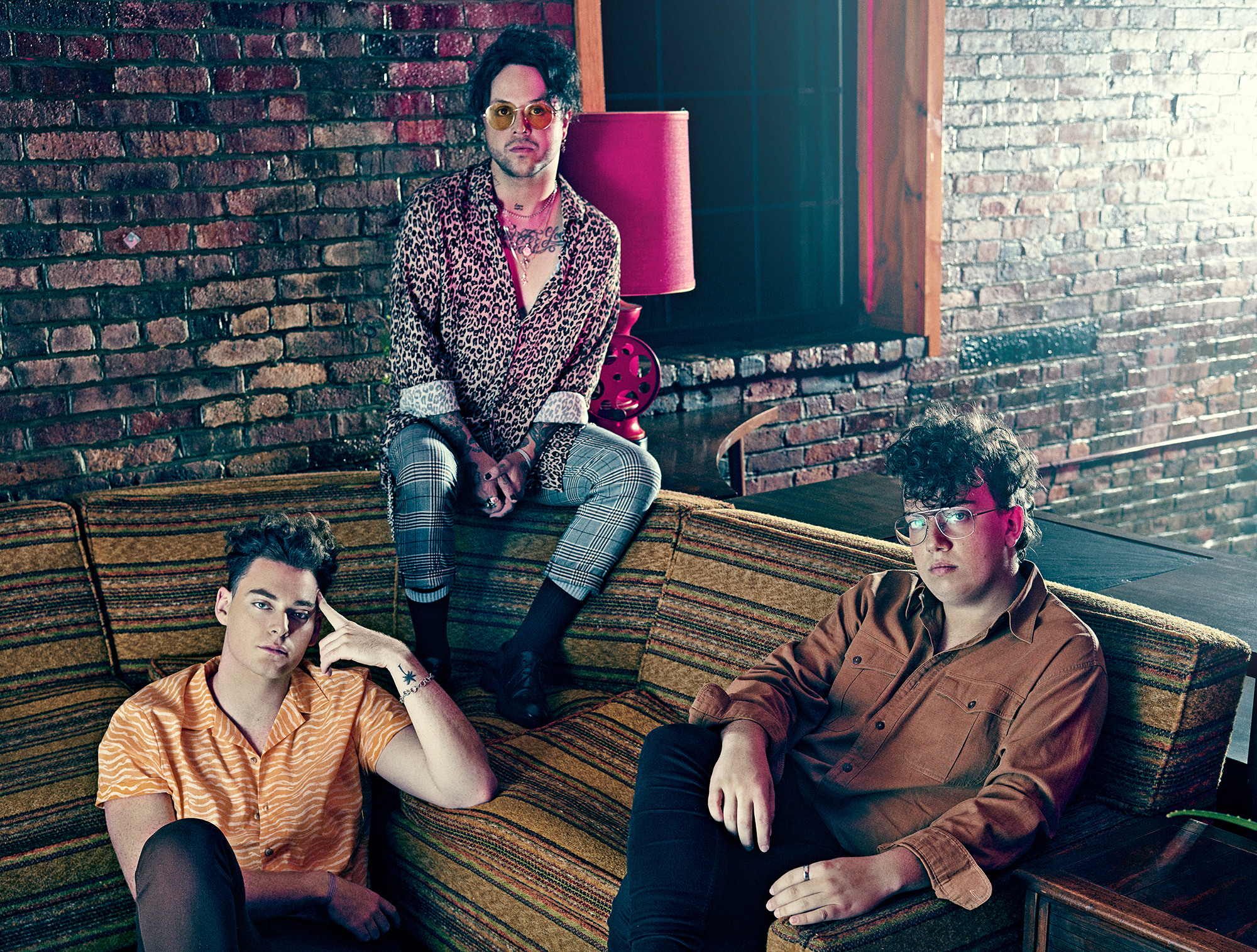 How are you doing? You’re on the road currently, right?
Yeah, we’re currently in Omaha, Nebraska.

How’s the tour going so far?
Good, man. The show’s have been selling out. Meeting new people, seeing new places. It’s been good.

Where have you been that’s new to you that you’ve really enjoyed so far?
Honestly, here in Omaha has been really fun. Really interesting.

I remember a lot of the Saddle Creek bands came out of Omaha, like Bright Eyes and stuff.
Yeah, I’m a huge Saddle Creek fan. I’ve been checking that stuff out today.

I’ve talked to a few bands on tour who love to hit up local record stores and go hunting for vinyl. Are you one of those guys?
I’m not that hip, no. I try to find good local food. I wish I was cooler than I am.

Before you mentioned, “eventually it’s going to connect.” Did you feel that right away when you started working with the guys in Lovelytheband?
Yeah, we hit it off pretty quickly. When Julian and I were finishing up our first EP and then Sam got involved and we kind of put the final music to it all. Around then, before Sam joined the band, we’d signed to Sony/RED, and then Sam joined the band and literally a couple weeks later, we were on promo and then on tour. It was kind of quick. It was kind of like, “OK, we’ll figure it out” … They’re the best musicians I’ve ever played with, so it’s really inspiring every night, seeing them put a show together.

Other than your bandmates, you collaborate a lot with your producer Christian Medice and others [Samantha DeRosa also co-wrote the hit song “Broken”] in your songwriting. How is the collaborative process for you? Is it something you’re more comfortable with than writing alone?
I love collaborating, especially with Christian. He and I have been writing together for going on 10 years. I’ve done everything with him, so it’s cool to have success with your friends. He’s kind of like—I don’t know. He picks me up, straightens me out and keeps me focused. He picks up where I’m weak, and vice versa. It’s a good balance.

Do you normally bring songs to him in a sort of skeletal form, and he helps you flesh them out?
Every song is different, man. I’ll come at him with a full song, or we’ll just go in and pull something out of thin air. You never know where the magic is going to come from.

Speaking of, your latest single, “Maybe, I’m Afraid” is a beautiful track …
Thank you.

I’d gotten a press release that the video, which is also beautiful, raises awareness for the Beyond I Do initiative. I was wondering if you’d like to talk more about them and how you got involved, because it sounds like they’re doing some really good stuff.
We got involved because we were trying to be aligned with an organization that was supportive of the LGBTQ community. We started chatting with them. There were a lot of things that I weren’t aware of that go on in this country … Like, in 30 states it’s legal to be discriminated against—legally discriminated against based on the fact that you’re LGBTQ, whether it’s getting hired for a job, or living somewhere. The fact that’s a legal thing that can happen in 2019 is absurd to me. The fact that it’s still a conversation, that people can still get their hands in telling someone who they can or can’t love in 2019 … The fact that we’re going through this in the current state of America just baffles me. People are still stuck on a book that was written 2,000 years ago, and the government is telling you how to live your life is just backwards to me. There’s just so much heavier shit that people should focus on; why do you have to meddle in someone’s love life? … There’s people literally fucking starving to death. I don’t know. I think there’s a lot wrong with this country right now.

I was going through the website, and I didn’t realize a lot of the stuff was still going on. It makes sense that the name of the foundation is Beyond I Do, because the right to marry is there, but there’s still a lot of work to do …
That’s the baffling thing. The fact that we have to say, “the right to marry” … Are you kidding me? The fact that that’s a sentence that we have to say out loud in America. This is the land of the free, I thought, but at what cost? It’s not free for everybody. It’s pretty free if you’re rich and white, but not for everybody else.

The thing I like about the song is that it seemed universal. I was wondering if it was written with LGBTQ issues in mind.
The song is about being scared of the good things in front of you and the difficulty of accepting the good things that are standing right in front of you and embracing them, whether that be parts of yourself that you’re scared to embrace, or relationships, or people, or opportunities. The song is painted in the light of a prior relationship with this person I was scared to commit to. Relationships are hard. People always think it’s this fairytale thing, but they take work. It’s not an easy thing. Someone said once—I forgot where I heard it but it stuck with me—marriage is not a word, it’s a sentence. It takes work. People get scared. People get comfortable, but at the end of the day, you’re going to be there and it’s good to embrace the good things in your life and accept everything about you—the good and the bad … If you’re busy focused on who you’re supposed to be, you’re missing out on who you actually are.

What was it like for the band appearing on American Idol?
It was wild, man. There’s a lot of things that have happened with this band that we’ve done lately where I’ve been, “Are you sure that you have the right band?” That was definitely one of them. Being up there, and not just being asked to perform on the show, but being a mentor on the show was just wild. I was like, “Are you sure that you have the right guy?” It was a really cool experience singing with those kids and meeting Katy Perry was cool, and Lionel Richie and Luke Bryan. We’re all really big fans of them. When I met Katy Perry, I’ve been a fan forever, and her being like, “I heard your song on the radio, and I looked it up, and I really love it.” I was like, “Wow. You did that?” … That’s amazing. When I met Lionel Richie, he gave me a big hug and said, “Your song is really powerful,” and I was like, “Oh my God, You’re Lionel Richie.” Meeting those three was wild. There are people in life that you know they’re really humans, but you only see them on TV … and then they’re complimenting you on shit you’ve done, and it’s like, “What?” It was definitely a trip to be there.

The show’s been on a long time. Did you watch it as you were coming up as a songwriter and musician?
Yeah, I watched it as a kid, like in high school when Kelly Clarkson was on. Honestly, I haven’t watched it in a while. Then we got the call that we were going to do it, and I was like, “Oh shit!”

Did you ever consider going on the show yourself?
No way, man! I can’t sing! Those are shows for people who can sing. I lucked my way into this.

See Lovelytheband live when they play Ace of Spades (1417 R St.) on Thursday, May 23, 2019. Also performing will be Jagwar Twin and Flora Cash. This is an all-ages show, and doors will open at 7 p.m. For ticket information, go to Aceofspadessac.com or Lovelytheband.com. For more info on Beyond I Do, check out Beyondido.org.