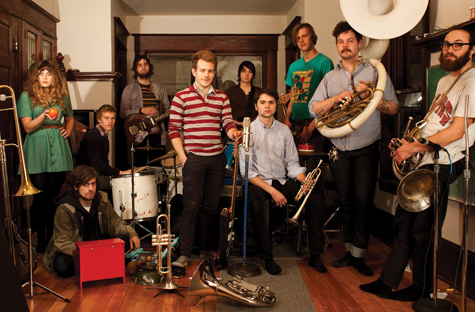 Typhoon continues to build momentum after a yearlong hiatus

Bands have a hard enough time staying together with just a regular roster of three to five members. Heck, even The White Stripes have been on a lengthy break, and there are only two of them. Taking that into consideration, you could imagine the difficulty of keeping a band solvent when it’s anywhere from seven to 15 members strong. That’s a lot of moving parts (perhaps even a lot of egos), and it certainly has given Portland, Ore.’s Typhoon some difficulty. However, after a hiatus that lasted about a year, Typhoon has been as strong and prolific as it has ever been.

“It got to be too much,” said Typhoon’s frontman and chief songwriter Kyle Morton. “There were a lot of people in the band before too, but I think we had a harder time managing interpersonal relations and managing pressure, and even figuring out if we wanted to do this, and I think the answer was yes after a year of not doing it.”

“Yes” is a bit of an understatement. True to its name, Typhoon has been churning the waters of its creativity in the past two years. Last year saw the band release Hunger and Thirst, an album highly lauded in its hometown of Portland and beyond. Oregon Public Broadcasting called Hunger and Thirst “arguably Portland’s best musical export of 2010.” High praise considering the amount of quality bands the City of Roses has been producing in recent years. Morton said he was appreciative of the band’s accolades, especially standing out in such a crowded crop of bands.

“Portland has this M.O. for being super friendly, and most of the bands we play with up here are very nice and very good, but there’s this kind of competition underlying everything,” he said. “It feels good. We put a lot into that record. It was a labor of love for myself and Paul [Laxer, co-producer] who recorded it for us, because I would get home from work, and we would start recording from 6 to midnight every day, seven days a week for a few months.”

However, Morton said he also doesn’t want to get caught up in what others are saying about his band.

“I try not to ever read any blogs anymore, because it makes you go crazy after a while,” he explained, stating that the praise, while gratifying, could also lead to heightened self-consciousness.

“I’m hoping I can turn that into an advantage and maybe the self-consciousness can make for better songs,” Morton quipped. “I hope it’s not crippling, but it’s hard to say at this point.”

The praise hasn’t hobbled Morton’s creativity yet. While recording Hunger and Thirst, he and the band were also working on new material. The band came up with a handful of new songs that make up A New Kind of House, a stellar collection of soaring orchestral pop music. In fact, the EP, which started out as just a couple of B-sides, almost grew into another full-length album, but Morton and the band “decided to cut it where it was and not take on too much.”

More settled in from their hiatus, Morton said that A New Kind of Thirst “feels like us playing together as a band. I feel like it’s all there, whereas the last record, it was more like a little bit of strings here and a little bit of this there.” Typhoon’s ease of transition from Hunger and Thirst to A New Kind of House could also stem from the carryover of subject matter from LP to EP.

“I think of it as a sequel and a prequel,” Morton said. “On the album, there’s a song called “Claws Part 2,” and [the new EP] has “Claws Part 1.” It’s a song that we wrote a long time ago but underwent an overhaul this past year. To me, it has a cinematic tie. Everything else were songs that we started writing in the same house that we recorded Hunger and Thirst, and it just sort of feels like an extension of that album. There are actually a lot of lyrics that repeat on the EP that were on the album.”

Morton said A New Kind of House deals with the tie between home–or houses–and memory. He also went on to say that themes such as these could become fixtures in his songwriting for some time.

“I don’t know what else I’d write about,” he said. “I have these themes or an idea that I’m probably going to keep trying to get it right; until I feel like we do that, I think we’ll keep at it.”

Other than sticking to consistent themes, Morton doesn’t have a set plan when it comes to his songwriting. In fact, the process has become more collaborative as the group has solidified into a core unit, which now consists of 11 members (“Eleven has been our magic number lately,” he said).

“With the writing, we haven’t gotten it down to a science yet, but maybe it shouldn’t be a science,” Morton explained.

A New Kind of House will be released on March 8 through Tender Loving Empire. In the meantime, the band will be on the road promoting the EP; however, Morton is already itching to get back into the studio.

“I feel like right now we’re being prolific, and I want to do that for as long as we can,” he said. “I don’t want to waste it.”