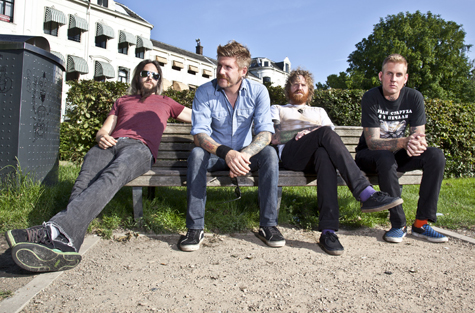 Mastodon thunders across the United States on strength of The Hunter

Over the past decade, Mastodon has established itself as one of the premier forces in American metal. Among critics and fans, the Atlanta-based band has become as huge and monolithic as its name suggests. In 2009, Mastodon showed once again that it had brains equal to its brawn with the release of Crack the Skye, a soaring concept album (in a string of concept albums) in homage to drummer Brann Dailor’s sister Skye who took her own life when she was just 14. Crack the Skye was lauded by critics, and the accolades translated into sales as well. The album debuted at No. 11 on the Billboard Top 200 and also afforded the band the opportunity to tour Europe with Metallica, hit the road with grunge icons Alice in Chains as well as conduct their own headlining tours here and abroad. How would Mastodon follow up the success? Shake up the establishment, of course. They hired a producer better known for hip-hop than progressive sludge metal and ditched their penchant for high concepts to create their most straightforward and accessible album to date, The Hunter, released on Reprise Records Sept. 27, 2011. For those afraid that Mastodon may have Bob-Rocked themselves like their aforementioned European tour mates, fear not. This is not the Mastodon you know and love, but it packs just as mammoth a punch.

You won’t find a lot of math for math’s sake on The Hunter, but Mastodon’s sound is unmistakable. Opening track “Black Tongue” is the Mastodon you remember, just condensed into a roughly three-and-a-half minute burst of ferocity. From there, the album takes a sharp turn into “Curl of the Burl,” where Dailor and crew ditch the intricate progressions and time signature manipulations for heavy-riffed southern-fried rock. What follows is space-age weirdness (“Stargasm”) seated at the same table as beautifully wrought metal epics (the title track). What becomes apparent from listening to The Hunter is that Mastodon are as capable as ever, even when they’re not going out of their way to flaunt their impressive chops.

Submerge had the opportunity to interview Dailor while the band was in preparations for their upcoming headlining U.S. tour, which kicks off Oct. 25, 2011 in Austin, Texas. Dailor says that the band will be unleashing perhaps “the longest set list that we’ve done” at stops on the tour.

“We’re probably doing six or seven songs off the new record, and then a whole bunch of other ones,” he says. “I think we’re doing 23 or 24 songs total.”

Now five albums deep, Dailor says that the band has a lot of material to choose from making the decision of what makes the cut live more difficult, but the band doesn’t just take themselves into account when they hit the road. He explains that he and his band mates keep tabs on fan chatter on message boards and elsewhere to see which songs are getting the most reaction.

“When we’re writing an album, that’s for us,” Dailor explains. “We just try to concentrate on what we like. I feel like the show is more about the fans. It’s about us as well, we want to play the songs we like, but we make sure that we love the songs first and foremost when we put them on the record, but what people are responding to, we make sure to play those live.”

Mastodon will bludgeon through Sacramento on Nov. 2, 2011. In anticipation of the upcoming show, Dailor took some time to converse with us about The Hunter and gave us some insight into the making of it.

I wanted to take it back to 2010 when you guys did the Jonah Hex soundtrack. I read in an interview that you said that was the first time you tried a spontaneous recording process like the one you tried with The Hunter. You said that it gave you guys the confidence to work that way. Why did you go more spontaneous with the Jonah Hex project as opposed to what you’d done in the past?
We didn’t have time to do anything but. We had two weeks in Los Angeles, in a studio, and we were just going in there every day and seeing what we could come up with. That was the plan from the beginning with that, because we really didn’t have time. We were on tour…we were in Europe for three months with Metallica, and we were pretty much fried. We had three weeks off between tour, and those three weeks were supposed to be us going home and chilling out because we’d just run ourselves through the wringer in Europe. Instead, we headed to L.A. … There wasn’t a lot of time to sit and work stuff through for six months. It just wasn’t that type of thing. It was a lot of fun doing that, because you get used to doing things a certain way, and I don’t know if it’s superstition or whatever, but you get used to it because it’s worked in the past. We wanted it to be something that we dug and were proud of, but when you’re writing for a movie soundtrack, it’s not something you can get married to, because it’s not your decision if it gets used or not. It’s a different thing. You have to sort of write music and let it go. We were providing some riffage for their movie and handing it over, so to speak.

So it definitely wasn’t the same mindset you’d go into the studio with when you make a Mastodon record?
No, and that’s not to say that we weren’t going to put our stamp of approval for it, because we did enjoy some of the stuff that came out. But it wasn’t the same thing. A Mastodon album is a different thing. Even though I talked about the new record being more spontaneous–and it was, and I think the Jonah Hex thing did give us some confidence in ourselves that we could just write stuff on the spot and have it come out good–but it wasn’t the same thing. A lot more work went into The Hunter, obviously.

Some of The Hunter was written on the road with Alice in Chains. Was that something new for you guys?
Yeah, kind of. It’s happened a couple of times before. There have been some things that have been written that have come together in sound checks and stuff like that. Somebody will start jamming something and someone will start playing along, and we’ll all say, “Hold on, what’s that? Let’s make sure we don’t lose that. Are you going to remember that? Maybe we can record it real quick, because that’s awesome.” But this time wasn’t the first time, but it seemed like it was happening a lot more often. We had road crew that would go and grab the practice amps and set them up, and they’ll just be back there with a guitar plugged in ready to go… When Brent [Hinds, guitar/vocals] or Bill [Kelliher, guitar] wander back stage, and there’s a guitar and an amp set up and ready to play, they just pick it up and start playing. That started happening every day. I’d pick up my iPhone and hit record if I heard something cool, if I heard something worth our while. If it wasn’t for the iPhone, this record wouldn’t have come together so quickly.

A lot of artists expressed remorse for the passing of Steve Jobs. Was that something that affected you at all?
Absolutely. It’s sad. I feel bad for his family. It’s always sad to lose a loved one when you feel like it’s too soon. His mind, he was one in a million, one in I don’t know how many millions, but we all lost a great thinker and idea person. There just aren’t enough idea people, you know?

The Hunter was dedicated to a couple of people the band lost during the recording of the album. The title is a nod to Brent Hinds’ brother Brad who passed away. Other than the title, did that play into the writing of the album?
I think it did in the aspect of the way the record sounds, the way the record came together. Brent and I were going down there every day. There were a lot of things happening not just with Brent, but with the other members of the band that were really stressful. Where in the past, making a Mastodon record was a really stressful thing, we were banging our heads against the wall trying to fit all this mathematical craziness into the middle of a song. It could be six months of fine-tuning and going in there and getting frustrated and all that stuff. I guess with everything that was going on on the outside, we really wanted the practice space to be a fun place to go and be the one place you could go and close the door and leave everything outside… I think that has a lot to do with the way the album sounds. It’s kind of stripped down. We would write a straight-up rock song like “Curl of the Burl” and be done with it and not care what anyone would think.

We dug it, it was fun. I think it had a lot to do with just the lightheartedness we wanted to approach everything within the practice space. We knew everyone was a little fragile, a little hurting inside, and we didn’t want to make the practice space the stressful place it can be because of all the other shit that was going on outside.

Mastodon will play Ace of Spades on Nov. 2, 2011. This is a stacked lineup that will also feature Red Fang and The Dillinger Escape Plan (fuck yeah!). Be sure to buy your tickets in advance. They can be purchased through Aceofspadessac.com for $28. Doors open at 6 p.m. for this all-ages show.