Janelle Monáe channels her inner robot on her full-length debut

Janelle Monáe is nothing if not polite. Is it her time spent in Atlanta, Ga., immersed in Southern hospitality, or excellent coaching on behalf of her publicity machine? In the end it doesn’t matter. She says all the right things and she’s a joy to speak with, as she talks in a modest, syrupy tone. She closed our brief interview by saying, “I don’t take your support for granted.” Along the way in her bourgeoning career, the rising star has gotten support from a wide variety of heavy hitters in the worlds of hip-hop, R&B, pop and even indie rock. Fall Out Boy’s Pete Wentz, Sean “Diddy” Combs and even Prince, the man himself, have all spoken words of praise in regards to Monáe, whose sound dips from the wells each of these artists and more draw from. For an artist who says she’s hoping to bridge gaps with her music, it would seem that she’s off to an excellent start. Written along with the Wondaland Arts Society, a collective of artists Monáe founded with Chuck Lightning and Nate “Rocket” Wonder, Monáe’s debut full-length album The ArchAndroid begins with a soaring orchestral intro before slamming into the sultry sci-fi funk of “Dance or Die,” featuring fringe hip-hop hero Saul Williams. Outkast’s Big Boi makes an appearance on “Tightrope” (a term that appears throughout this sprawling concept album based on the 1927 Fritz Lang film Metropolis). “Tightrope” is as typically radio-friendly as Monáe gets on her debut long-player, but still retains her flair for dramatic sounds and movements that never feel forced or overwrought. Indie dance rockers Of Montreal, who Monáe will set out on a co-headlining tour with this September, also make an appearance on The ArchAndroid, contributing–if not dominating–“Make the Bus,” a Beatles-esque space rock number.

It’s not just the diversity of collaborators that has been catching ears of music fans and bigwigs alike, but the breadth of styles Monáe effortlessly stitches together. “Come Alive (War of the Roses)” has the spit and snarl of ‘70s punk, and Monáe isn’t afraid (or incapable of) letting that music take her beautifully smooth voice down a bumpy, ugly road. Basically, The ArchAndroid should turn just about as many heads as it causes those who just don’t get it to scratch theirs.

Monáe has all the pieces in place to transcend the title of rising R&B star. Not only is she remarkably deft at genre bending, but she also has her sights set on making film and graphic novel components to accompany The ArchAndroid. Though she speaks openly about the writing of the album, she prefers to play details about these upcoming projects, and even her upcoming tour with Of Montreal, close to the vest.

“The element of surprise is very important to me,” she says.

Given the unlikely course of her career so far, more surprises are surely in store. However far she goes, it is our hope that Monáe maintains the graciousness that is becoming her signature.

“We started off working in a basement in Atlanta, Ga.,” she says of her and her collective’s modest beginnings. “To start the Wondaland Arts Society and to see that we creatively have been in control of everything is a huge deal, because artists want that, and we fought for that for a long time. We plan on opening up more doors for other artists, just in terms of having a different blueprint to look at for inspiration. We’re very thankful, and we’re very humbled. We’ll make mistakes, of course, but we will take risks so others may take risks.”

I’d read that The ArchAndroid album had been inspired by the movie Metropolis. What about that movie inspired you to write an album?
There was a quote at the beginning that said, “The mediator between the mind and the hands is the heart.” Immediately, I said, “That’s me.” I’m the heart. I want my music to be the heart, because it represents unity. It brings people together. That’s what I’m about, and that’s what this music is about. It’s creating music that bridges the gap between the haves and the have-nots, and the oppressed and the oppressor, the minority and the majority, and the androids and the humans. That’s what inspired me about that quote.

The connection we have now with technology is as great as it has ever been. Is that an aspect that played into your writing?
No. As an artist, I’m very thankful for technology. I’m thankful for sites like Myspace, Facebook and Twitter because I was able to talk directly to the people when I was putting out independent work in music. I am a lover of technology. I think it’s cool to have nanotechnology, which advances every two years and becomes smaller and faster. I do believe we will live in a world with more advanced androids, and I always pose the question, “How are we going to all get along together?” Are we going to fear them, or teach our kids to be fearful? Are we going to oppress them? Are we going to repeat history and try to enslave them? How are we all going to get along? I connect to the android, because the android represents the other. I feel like we’ve all felt like the other at one point in our lives.

The country seems to be very polarized, but like you were saying before, you like to express unity in your music. Listening to the album, there’s a lot of different genres represented. Does that universal sort of approach make you feel like an outsider?
No… There are a lot of other artists and people out there who are like myself in that they have a very diverse palette of music. We grew up in the iPod generation. I don’t think any of our iPods are just hip-hop or classical music. My iPod ranges from Jimi Hendrix to Judy Garland to Rachmaninoff. I’m able to digest all that in without feeling uncomfortable to listen to. My musical taste is very diverse, and I think all of our musical tastes are becoming that way because of the iPod.

It’s interesting to hear you say that, because The ArchAndroid definitely has an album feel. With iPods, a lot of people have that shuffle mentality, but on your album, the songs flow from one into the next. It wasn’t very single-driven. Was it important to you to preserve the album as an art form?
Sure, this is an “emotion picture,” and there’s an arc to the story. We wanted the listener to listen to The ArchAndroid from the beginning to the end and take in the transformative experience. The album will, I believe, transform you to become a more diverse music listener because of the range that’s in the album. But we also crafted together songs that can stand alone. They all depend on each other, but they all stand alone. You don’t have to know anything about the concept. We made sure the songs were just jamming by themselves.

Given that it is a concept album, did that lead to a lengthier writing process between you and the Wondaland Arts Society?
It was a balancing act. Everything is a tightrope. You have to pick and choose where the concept comes in. We created other outlets, like the graphic novels, for people who want to know more about the concept and Cindi [Mayweather, Monáe’s alter-ego in The ArchAndroid] and the android community and what comes next. We’re also going to have visuals with a very strong narrative that will play into the concept. We didn’t try to do anything different just for the sake of doing things differently. We didn’t try to make sure, politically, that things were correct either. We just kind of followed our hearts and did what felt good.

How would you categorize your working partnership with Wondaland Arts Society? Are you all on the same wavelength? I’m sure you all bring something different to the table when you sit down to create.
It’s a very diverse group, but at the same time, we’re all standing up for the same cause–individuality and helping us all to celebrate our differences. We’re all artists who run the label, from graphic novelists to screen writers, performance artists to musicians, visual artists, you name it. We really want to help preserve art. We love coming up with new ideas, and we have a strong belief that the imagination can inspire nations. Music is our weapon at this time. We plan on releasing more artists into the world, like Deep Cotton is up next. They’re going to come out with sweets very soon. We leave our egos at home. We can speak our own minds and voice our opinions, and no love is lost. We go with the best idea.

You mentioned the graphic novel component, and I’m a big fan of comic books. Is that something you’re having a close hand in? What books did you read that really inspire you for this album or just in general?
I co-wrote the graphic novel with Chuck Lightning. He’s my writing partner. The illustrations were done by Chad Weatherford. We loved Octavia Butler’s Wild Seed. That was a huge inspiration for me. Alfred Hitchcock was also a huge inspiration, just the way he wrote things out. We’re a fan of comic book companies like Dark Horse and DC, of course. We’re hoping to put out something just as quality-oriented. 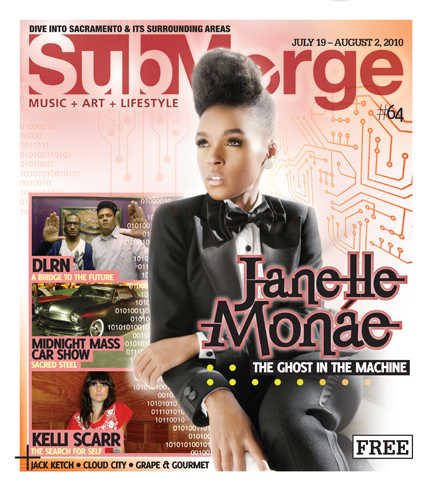 It will be well worth the trip to head to San Francisco to see Janelle Monáe perform at the Outside Lands Festival on Aug. 15, 2010.