Where Do We Go From Here? • Matt and Kim Return for Triumphant Sixth LP Following Brief Hiatus 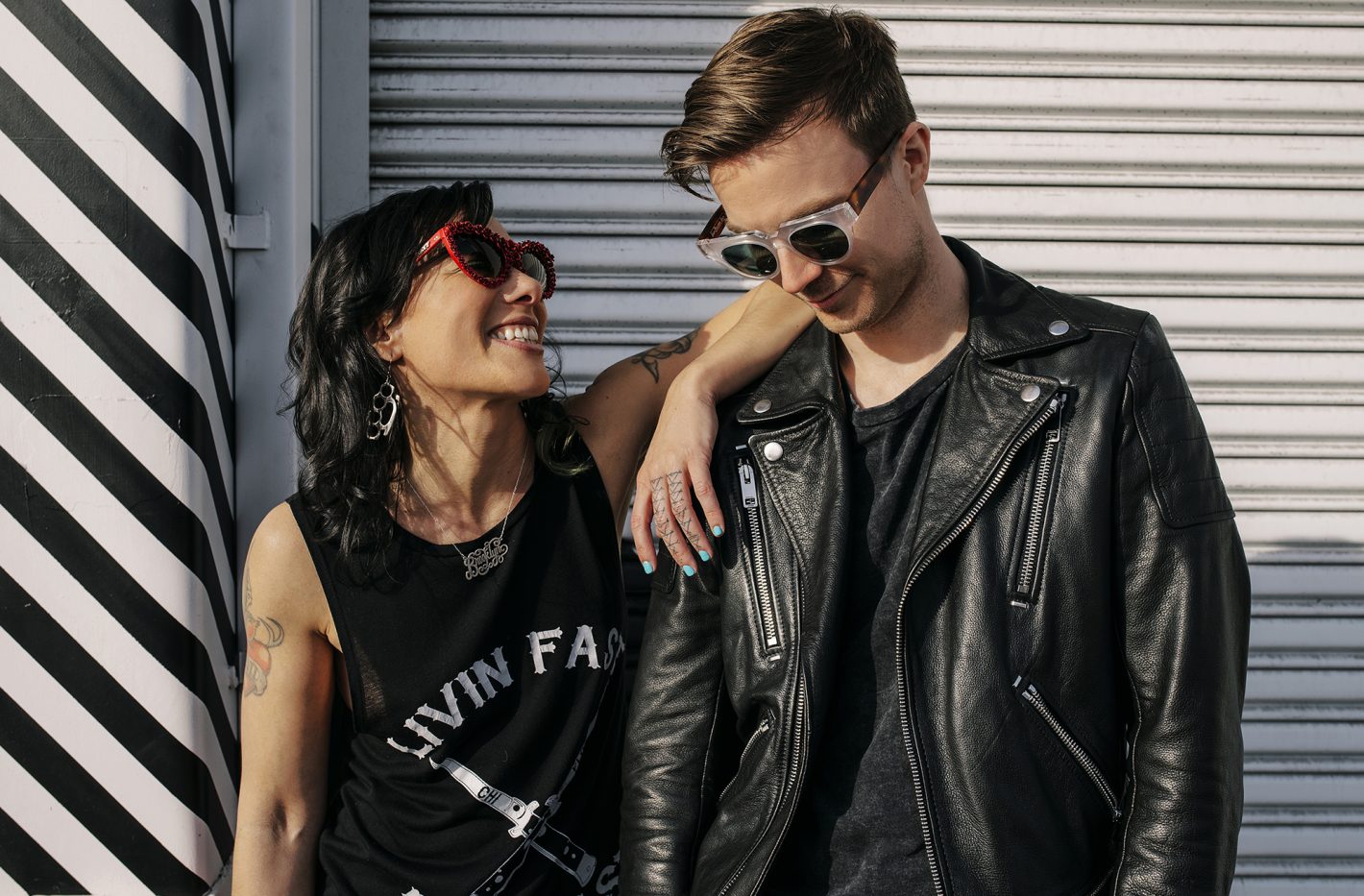 Matt Johnson and Kim Schifino, members of the electronic pop act Matt and Kim, have been partners in crime since the early 2000s, when they met as students at Brooklyn’s Pratt Institute. They almost instantly began collaborating musically. Their infectious, melodic sound is instantly recognizable, as are both Johnson’s unique vocals and Schifino’s wildly raw and chaotic drum style. Their most recent release, a four-song EP titled WE WERE THE WEIRDOS, hit the streets in 2016.

The pair built a small but enthusiastic cult following early on in their career. In 2009, when their song “Daylight” was featured on a Bacardi Mojito commercial, they exploded on the national scene. That same year, Matt and Kim also made waves when the music video for their track “Lessons Learned” debuted, which featured the duo running naked through New York’s Times Square. The two have been a consistent presence in the indie music scene since, having put out five full-length albums, continued steady touring and netting an impressive 50 million views on YouTube.

Last March, Matt and Kim were performing at Mexico’s Vaiven Festival, when Schifino suffered a severe on-stage injury, tearing her ACL and forcing the band to cancel an upcoming tour and go on hiatus. After an extended break, they are back with a new album, Almost Everyday (due to be released in May) and are getting ready to tour in support of their new album. Submerge had the opportunity to speak with Johnson prior to embarking on their journey.

I wanted to start with something you’re probably tired of talking about right now: Kim’s injuries. Have there been any long-term effects? Is she taking any special precautions?
We haven’t really even talked that much. Last year, when it happened, we basically just fell off the map. We cancelled all of our shows, then we weren’t talking to anyone for a long time, and now we’re really just beginning to talk about this album and this tour. It is still fresh in a way because [Kim] is still doing her physical therapy; now she’s down to just a couple times per week as opposed to every single day of the week. I mean, she came at this thing like a football player would, like it was her job to get better. So it’s been almost a year of physical therapy, all the time. They say you’re not fully healed for two years. It’s a rainy day here in New York right now, and she feels that a lot, and when we fly. But, overall she worked so hard, so much harder than I would. I would have totally been on the couch. I watch her dance, and we’re in rehearsals now for tour, and she’s up on top of her kick drum again, and it’s like nothing happened. But, she’s still got to be a little cautious.

Was there ever a moment where retirement was a consideration?
[Laughs] No. It’s crazy to think about how with, say, professional sports 20 years ago, an ACL and meniscus tear, that could be the end. But, thanks to modern medicine, it seems to be a minor setback. Maybe I’ll call it a major setback.

Let’s talk about the new album. You guys brought in a lot of guests. How were the guests selected? Did you have a wish list, or were they brought to you as options?
No, I mean we had decided we wanted to get these extra voices on the songs. Because there’s something that happens when we play live and the audience is singing along, the energy that’s created that’s more than just my voice. And, like many singers, I have mixed feelings on my voice. I like adding the other voices in and the energy it creates. Basically what we did was thought, “Wouldn’t it be cool to have some of our friends who are musicians?” We just started reaching out and seeing who was available, and who wasn’t locked in some hardcore contract that they can sing on the album as well. Everyone on there is people we know that we are friends with, but were all willing to take the time to do some vocals for us. And it’s so cool to hear bands that I’m a fan of, to hear them on songs we wrote.

It’s been about a decade since you did that big Bacardi commercial. You’ve done the Caribbean Cruise commercial and the Google Pixel commercial. I’ve gotten mixed reviews from artists about commercial work, but you guys seemed to have embraced it. Have you ever had reservations?
Well, funny enough the biggest reservation I had was before the Bacardi commercial. I came from a world of punk rock, and the term “sell out” was easily used and so I remember when the Bacardi commercial came around, we were like, “Wow.” This is, money-wise, especially where we were as a band, we had never seen a check like that before. We were like, “Hopefully it won’t get seen by many people.” So we were reserved. But honestly, that commercial changed our band; it just broke us as a band. The biggest payment they could have ever given us was just having our song in that commercial, and having people hear the song and react to it. And it was this very beautiful, cinematic commercial just with our song and nothing else, no other dialogue on top of it. Millions of people got exposed to that song because of that commercial. It changed our lives. So we realized the power of having your song in the right place, and it was as much a Matt and Kim commercial as it was a Bacardi commercial. Luckily, we’re in a position where more and more radio stations take a chance on us, but we’re this band that’s between many things—we’re not a rock band or a pop band or an electronic band. We’re tough to play on a radio station. So sometimes, these opportunities have been really great for us. Not that there haven’t been [opportunities] we’ve turned down because it didn’t feel right. I remember one particular yogurt commercial, it was a very much like, “Kids like this yogurt, mom’s like it, too.” It did not feel artistic in any way. They ended up basically just copying our song anyway.

Have either of you considered working solo, on projects that are separate from each other?
Well, as far as musically, I actually co-wrote and produced my first song for another artist earlier this year. Yeah, I haven’t really even mentioned it, and I don’t think I threw it on social media, even though I’m super proud of the song and the artist’s really cool. This guy goes by Bohnes [Alexander DeLeon of The Cab] and the song is called “My Friends.” It’s a really rad song. It was really cool to hear a production that I had done. He’s got like a young Justin Timberlake-y voice, but with more edge. I don’t know, but I do hope to do more things like that.

Was it weird not having Kim involved in a project?
Yeah, because we do everything together. So it was a little weird. I’ll tell you, I tend to go a little sort of out there, and Kim grounds us back and says, “Maybe that’s a little too far.” It’s kind of nice to pull the reins off for a second and see what happens. But, in the end, her input for Matt and Kim is obviously invaluable and so appreciated. I don’t know where we would end up if she wasn’t around, but it could be in a bad place.

Have you guys ever considered adding any permanent members to Matt and Kim other than the two of you?
Permanent members? I don’t know. I feel like Matt and Kim and that other guy would be weird. I just feel like it would be weird to have someone else on stage with us. We hope someday to do some more collaborative things, and maybe we will bring someone in more of a lead position in. I don’t know. I don’t want to build up any rules. We’ve been doing this for a while.

I want to end with a question about the last track on Almost Everyday. It’s a song called “Where Do We Go From Here.” I am positive the track isn’t a metaphor for your career path, but I wanted to pose the question: Where do you go from here?
We wrote that song with a couple of things in mind. We wrote it about friendships or relationships that had gone toxic, and where do you go from there? I think a big thing in our mind is, when certain things happening in our country right now, where do we go from here? You know, it seems impossible for certain things to change. But, as a band, where do we go from here? Album number six. We’ve been lucky. Every time we take a break, every time there’s a new album and every time we finish a tour, we always wonder will people stick with us? Will they come back? Will they move on to whatever is next and new and fresh? And then we put this tour on sale and shows started selling out immediately. I’m just so thankful that we get to continue to do what we do, that people want to come see us. Without a lie, Kim finally got back to playing drums and rehearsing, and she was tearing up just to be able to do it again, because she missed it so much. So, as long as we get to keep making music and playing shows, we’re happy.

See Matt and Kim live at Ace of Spades (1417 R St., Sacramento) on April 2, 2018, at 7 p.m. Cruisr and Twinkids are also performing. Tickets are $30 for this all-ages show and can be purchased in advanced through AceofSpadessac.com