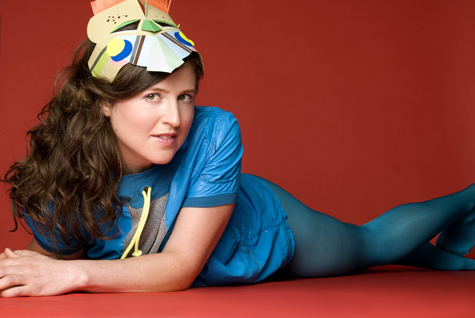 Mirah Doesn’t Shy Away from Bugs or Slime

Insects get a raw deal. One, they’re kind of ugly, and two, their small size makes them easily squishable; but in the grand scheme of things are they really that much different than us? OK, maybe they are, but that doesn’t mean they aren’t important or can be beautiful and inspiring—in their own bug-y way.

With Share This Place: Stories and Observations, singer/songwriter Mirah and her backing band Spectratone International painted insects in musical light. Inspired by the writings of French entomologist Jean-Henri Fabre, Mirah did not find trying to empathize with insects to be too daunting a task; however, it was definitely a step outside her comfort zone.

“I don’t usually have books as source material,” she told Submerge from her home in Portland, Ore. “Most of them are creative writing projects, and they all have to do with me. I didn’t see it as a challenge to engage the listener, really. I figured that was a natural result. I don’t know; maybe I was being too confident.”

The album was released in 2006, and she has since released a The Old Days Feeling, a collection of demos and rarities from earlier in her career. She has also been at work on a new solo album, but the draw of tiny critters, as well as performing with Spectratone International (“We’re going steady,” she jokes) is still quite powerful. Mirah will play a string of West Coast dates beginning Sept. 6 that will bring her to The Press Club in Sacramento on Sept. 9. Read on, and stop by the show. You may just think twice the next time you reach for the fly swatter.

Was it difficult for you to step outside of yourself at first, or was it more liberating?
I would put it in the more liberating category rather than the difficult category. It was a relief in a lot of ways. It made me feel good to not be writing specifically about myself. It was like taking on a different role. I had to be compassionate with the subjects of the songs in order to use their voice. They’re all written—except for one—as if I was a bug [laughs]. That’s a good opportunity for any one to try to write a story. It’s like if you have a fight with somebody, the best way to not be in the fight is to empathize with the other person and understand their story and their perspective. That’s a good exercise for any one to do really.

I did notice, listening to the record, that there was a really playful feel to it. Was that something you were trying to emphasize?
I think it just came along naturally. I was making an album about bugs. I couldn’t keep a straight face the whole time. I wasn’t quite thinking about how many times I would have to answer the question, “So”¦Why bugs?” By the time we’d decided to do it, it seemed perfectly normal. Any time you come up with an art project and decide on the concept, you’re like, “Well, of course it’s that, obviously, my idea is to make a giant fiberglass Green Giant statue and put it up in the park.” For someone who hadn’t been a part of your process—the conception of the idea—it could seem really out there.

Was that a concern after you were done? How it would be received?
No. I guess after I first started seeing interviews and reviews about it, there were a few where I was like, “Oh, do people think this is a joke? Or do they think this is a silly kids album?” But a lot of the responses—a few of the reviews I read, people really seemed to get it, and they were really eloquent in writing what it was about, more so than I actually could be. I’m looking at it from the inside. It’s hard for me to be able to write a really complete description of the project and incorporating all of the things I hoped people would get from it. That sort of ruins it. I write songs, but I don’t want to break down, line by line, what my inspiration or experience was for every image that appears in the song, because that takes away from the listener. When people listen to music or taking in whatever kind of art form, what makes it effective for them is that they can relate to it personally. It gets cluttered up too much with what it means specifically to me.

Has someone else’s take on something you’ve written changed your perspective of it at all?
Maybe not changed my perspective entirely, but encapsulated what I was said in a fairly indirect way, using creative license. I’ve seen it written out in a more clear way. I say, “Oh yeah, that’s a good quote. I’m going to remember that when someone interviews me about this.”

I read on your Wikipedia page that you were a contestant on Double Dare. What was that like?
It was awkward. They made us wear a dorky outfit, and they didn’t let us roll our straight-leg, nylon pants at our ankles and tuck them into our socks, which was the cool thing to do at that time, not that I was a very cool kid. I had these huge glasses that were like bigger than my face, and one of the physical challenges was this sort of green slime, dirty-the-dishes, some weird Nickelodeon idea of something fun for kids to do. The stuff got all over my glasses, and I spent the rest of the show trying to clean off my glasses. They were all smudgy. It was really awkward. It was an awkward time. I don’t do very well amidst chaos and flashing lights and people saying, “Yeah, do this! No, no, no! Over there!” I probably wasn’t the best choice for a contestant on a game show, because I’m not really much of a ham when the cameras are on. When the cameras are off, I can ham it up, but turn a camera on, and I will shut down. So that was me, age 12, on Double Dare.

Did you win?
We didn’t win the whole thing at the end, the obstacle course, but we got halfway through. I actually used the money that I won on Double Dare to pay for the time I spent on the Great Peace March for Global Nuclear Disarmament. That’s not on my Wikipedia page. It’s funny, like, the silly things that are important to people, when what is important in my life is that as a 12-year-old, I was involved with the anti-nuclear movement. I actually left on the Global March, which went from L.A. to D.C., and I marched from Harrisburg to D.C. I was 12, and my parents didn’t go, and my cousin who was 12 went, and her parents weren’t there. It was this whole big deal that meant so much more to me than Double Dare. But that’s not on my Wikipedia page.