It may not be an easy task for a lyricist to pen a song that accurately depicts what he’s feeling at any given moment, but he has one important tool that an instrumental artist does not: words. Such was the dilemma electronic music auteur Mux Mool (aka Brian Lindgren) faced when he sat down to compose his latest album Planet High School, released Feb. 7, 2012, on Ghostly International.

“When you write songs without words, first of all, it’s hard to name the thing,” Lindgren said in a recent interview with Submerge. “It’s hard for people to tell what it’s about.”

Lindgren’s album, in this case, addressed what he observed as a prolonged adolescence in modern culture–a culture where, amongst other annoyances, over-sharing the minutia of everyday life has become all too prevalent.

“It was just something I was feeling when it came time to write another album,” Lindgren explained. “That’s what I was feeling more than anything over the past year, or year and a half.”

Though he was expressing these feelings through song, he did mention that it didn’t really change the way he worked all that much.

“It influenced how I felt, which may have influenced where I was grabbing things from, but it wasn’t like, “Oh, this is a high school gym class, this is a march song, this is a this,” he said. “It didn’t change it in that way.”

Though he acknowledged the lack of lyrics in his songs may make such concepts difficult for listeners to latch on to right away, their effect can certainly be felt through the album to those who are paying attention. Planet High School sheds the ethereality inherent in a lot of electronic music for something far earthier. The opening track, “Brothers,” seems to have a gin-and-juice-soaked swagger to its electro groove while the album’s first single, “Palace Chalice,” rattles with a sort of island beat. The overall feel of the album is one that is brash, headstrong, and perhaps a bit petulant, but that may not be surprising if you’d ever spoke to Lindgren, who, quite refreshingly, has no problem speaking his mind.

In the following interview, Lindgren, who will make an appearance at this year’s Sacramento Electronic Music Festival, divulged details about his creative process while offering pointed social commentary and voicing his opinions on experiencing electronic music in the live setting.

I was checking out the “Cash for Gold” video, and I thought it was a really neat clip. Did you have a lot to do with the concept of it?
The reason why I think I’ve hesitated on music videos for so long was because I never wanted to do a music video with me looking really cool with really cool things–anything flashy or anything like that. I actually wrote the story to the music video–the screenplay and everything was based on. It was just about being yourself and sticking it to your boss.

The album does have a bit of a funk feel to it. Is that indicative of the music you were listening to while you were creating it?
No, it just was funky. I was definitely not listening to any more or less funk than I was in the past year.

So your funk intake has remained consistent throughout your entire music career?
Yes, it’s been almost entirely the same.

The album just came out in February, but are you already looking at what’s next? Are you the kind of artist who’s constantly writing?
Yeah, it’s an ongoing process. It’s not really done in blocks. You just have to work when you feel like working, which is not always. Some people like to post that they work every single day and nonstop and all they do is work between flights and, “Oh my God, I’m on my way to a show and I’m working on a song,” and I don’t buy it for a second. Everybody has a limit where they’re like, “I don’t want to work on music. In fact, I don’t want to listen to music, and I don’t want to talk about music.” Everybody has that. I definitely have that. I definitely work quite a bit, every single day, but with these songs it was all in the moment when I started making them at least.

Is that “in the moment” process something you utilized just for Planet High School, or was that also the case with your previous album?
With the last album, the record label wasn’t sure what I was going to do career-wise, so they wanted as many songs as they could get. At the time, they wanted to grab everything, so Skulltaste had less focus in terms of an album, because I think maybe about 12, 13 of those songs could have been an album and seven of those were songs they just grabbed.

When you commented on people bragging about how they’re constantly working, it occurred to me that that may play into the idea of prolonged adolescence–sort of like the kid who’s too eager to answer questions in class.
There are some high-school-type social elements even among professional musicians… To me, there are these dudes who want to post, “Going into the studio!” every day, and it’s like, “Well, you’re a professional musician. That’s just your job.” It’s not like if you’re a janitor you’d post “Scrubbing toilets!” and everyone’s like, “Oh, dude, that’s dope. You’re scrubbing toilets.” It’s not all brag-able. It really isn’t.

Plus, all they seem to talk about is how much they’re working. To me, it seems like real-life experiences are the things that should inspire you to write songs. If your entire life experience is sitting in the studio behind a computer, it’s like, what is a computer song inspired by other computer songs? There’s just no feeling there.

When you’re out on the road, do those experiences fuel what you’re writing?
Yeah, because you’re seeing stuff, and you’re away from home. I saw this thing on Reddit the other day that I thought was really funny, because it was like, “Bus window is a first year philosophy class,” and it’s kind of true. Because as soon as you sit there and you’re by yourself, and you have nothing to do but look out the window and think about stuff, you start thinking some basic philosophical stuff. But when you do that forever, you do that for three years, and that’s every single day, you’re thinking about a lot of stuff for a lot of time.

Before you mentioned you wrote the story for your video. Do you often write stories and do those inform your songwriting?
I think the reason why I wanted to put the message behind the video, of just being yourself at all costs, it’s just more or less what I’ve had to go through in the past couple years, which is just being able to do music for a living, which is not always easy. It’s not always easy to convince people that it’s a viable career, but being myself has always been worth it, because that’s the message I’ve always agreed with.

Is it weird for you to hear yourself say that you’re a professional musician?
I don’t really tell people that. People I meet, I don’t really say that, because everybody’s a fucking DJ. Everybody is.

I’m the same way about telling people I write. I mean, I do, and I get paid for it, but the reaction is always weird.
Right, because they’re like, “Yeah, of course you are, dude.” And you’re like, “No really. I make money at it. It’s a job.” And they’re like, “Uh huh.”

Either that, or they think it’s more interesting than it actually is.
Oh yeah and that, too. That’s the other side of that. That’s when you play shows and people come up to you like, “Oh my God, that was so incredible,” and you’re like, “Calm down. I didn’t just cure cancer. I didn’t give your mom heart surgery or anything. I played with my computer in front of you. I’m glad you’re impressed, but let’s be realistic.”

You mention playing on your computer in front of people. How is it for you to connect with the audience? Do you sometimes have to be more physical to get people involved?
For me the show isn’t about what I’m doing physically. There are a lot of people who go out there with their sets pre-programmed, they press play, they tweak on filters for the next hour and a half and they dance around and throw their hands up during the exciting part of the song. They get a lot of credit, and they get really far that way, and I think that’s a fucking joke. I’m not a clown. I’m not up there to be a clown and choreograph the songs to whatever shitty dance I’m doing. I’m trying to create the mood, but I think about it in a more European style, which means the mood should be created by the songs I’m playing and the order I’m choosing to play them in and how those things are working. It’s definitely more of a listening experience. I don’t dance. I don’t jump. I don’t even make funny faces. At least, I try not to. 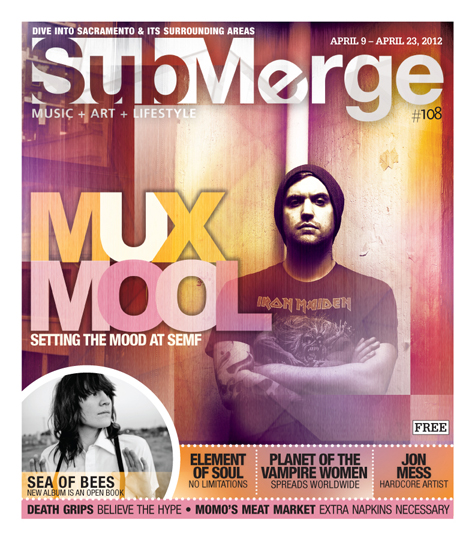 Mux Mool will be featured on day 2 (Friday, May 4) of the Sacramento Electronic Music Festival, which will take place at Harlow’s. The festival runs from May 3—5, 2012. For more information and to get a glimpse of the full lineup, go to http://sacelectronicmusicfest.com/