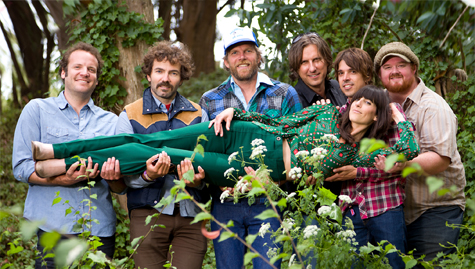 Much of how the music industry does business has changed, especially over the past decade, but some things remain the same. Perhaps labels aren’t the way to go anymore, and maybe artists are better off releasing EPs or singles as opposed to full-length albums. That’s really just window dressing. What matters is good voices and musicianship plus good songwriting usually equal good music. Unfortunately, another constant of the business seems to hold true: Good music doesn’t always equal success. If there really was a formula that guaranteed a hit, everyone would be using it. In most cases it’s just a matter of chance.

It was perhaps good fortune that Nicki Bluhm’s career in music began at all. Her now-husband Tim Bluhm, frontman for The Mother Hips, overheard her sing at a New Year’s Eve party, as the story goes, and encouraged her to start writing songs and perform live. Along with her band The Gramblers, Nicki released her first album, Toby’s Song, in 2009 and has since shared stages with notable rockers such as Phil Lesh, Bob Weir and Jackie Greene.

But despite all that, Nicki Bluhm and the Gramblers recently had an unlikely breakthrough that brought their music to a wider audience. One of a series of videos called “The Van Sessions” the band posted to YouTube went viral. The video features the band singing as they drive between gigs, in this case a cover of Hall and Oates’ classic “I Can’t Go for That.” Posted March 23, 2012 the video currently has over 1.2 million hits, and when Submerge conducted a Google search for the song title, Nicki and the Gramblers’ video came up second only to the original.

“Subconsciously, I think we knew that it was good content to have, but again, you can never really premeditate or expect anything like that to happen,” Nicki says of the impetus to post the videos in a recent interview. “There are tons of people in the world who do really incredible stuff, and it doesn’t get any attention at all.

“For us, we’ve had way more triumphant moments, whether they’re at a show or in the studio or whatever, that people don’t really know or hear about, but for whatever reason, these videos in our van were the things that people like. There’s no way to know that. But what we do know, what we were doing was pure and fun and real.”

The video brought the band some much-deserved attention. Nicki Bluhm and the Gramblers’ most recent album, 2011’s Driftwood, is a beautiful collection of country-fried pop-rock mixed with sun-baked soul–the kind of songs that seem as though they would be far more at home spinning on vinyl than queued up on Spotify. Nicki is happy to report that once the extra attention was turned her and her band’s way, she and the Gramblers were able to hold on to it.

“It was interesting to see something go viral,” she says. “Ultimately, you have all this attention that you weren’t expecting, and your goal is to direct it to your original music. I think we did. I think we managed to do that. I think people saw the video and got curious about who we were. A lot of people really did check out our original stuff and bought our records, and I hope that continues.”

As long as they keep putting out good music, it should. Nicki says that the band is currently hard at work on their third album, which should be out in early 2013. When we caught up with Nicki Bluhm, she was fresh back from a rehearsal where the band was revisiting some of their earlier material.

When you go back to the old stuff, do you feel the need to tinker with it a little bit or do you leave it as is?
A little bit of both actually. I know when I hear a song off a record, I really appreciate it being played the way I know it and not deviating from that. I guess just putting a little extra glitter on top is what we aim to do, so maybe we’ll add an extra harmony or maybe we’ll add a little extra instrumentation, but structurally we like to stick with how the song was originally written and arranged.

You said you’re working on some new songs…
We’re in the studio recording our third full-length album. We’ve been playing one song off of that. We’re just so excited to play some of the new songs. We definitely continuously work on the new songs. We’re trying to save a lot of them for the album release, because it’s a lot more fun when the album is fresh, but we can’t help it sometimes. They’ll slowly trickle into our set, I think, leading up to the third album’s release.

How long have you been in the studio working on the next record?
We’ve been in for a couple of months. We did a lot of it live, full band in the studio, which was really fun. And now we’re doing a lot of going back and listening. Initially we were planning a fall release, but now we’ve pushed it back to 2013 so we can really take our time and make sure we’re really happy with the way the songs turn out. We’re hoping to be done in the next couple months, but we’re still spending some time on it and giving it some extra love and care.

Did you start trying out different things than on your last album writing-wise?
I think so. Like Driftwood, there were multiple songwriters, so I’ll do a lot of the writing, and so will my husband Tim and Deren Ney, our lead guitar player, and our newest member of almost two years now, David Mulligan, will have a song on the new record. It’s really fun to have multiple songwriters. I think this album will be a little different, because we’re coming more at it as a band in the way that it was recorded–the nature of how the songs were arranged. We went in with skeletons of ideas, and we all helped arranged each other’s songs. There was a bit more of a group effort, I think, in this record as opposed to coming to the studio with a totally finished product and having other people play on it. We all put a little bit of our two cents in on each song.

Listening to Driftwood, it felt like a live album. It sounds like a band record as opposed to a producer’s record. Was a lot of that recorded live?
Honestly, I can’t even remember that well. I think it was probably a mix of both. But certainly, I think it was done a bit more piece by piece than the album we’re working on now. We always strive to have that live feel. None of us really like over-produced records. I think the best way to achieve that is to do stuff live, but certainly the current record was done more in that fashion than Driftwood. On Driftwood, there was a little bit less of the live happening, though, of course, there was some.

Do you go back and listen to your previous albums?
Typically, I don’t love to go back and listen to them. We obviously will reference them. Like today, we were referencing an old record of ours that we’re going to start playing again. It always feels so good. It had been a couple years since I’d listened to the recording and I’d finally listen back and laugh at it, or sometimes it just really warms me too. A lot of times I listen to live recordings and I’m like, “Oh God, I can’t believe this is in the world.” With a lot of the recordings from the studio, you go back and remember the time that you were doing it and what was going on in your life, and it can be very nostalgic, which is always really fun–or it can be really sad, or whatever it was that you were going through. But I don’t make a habit of it, but when I do I typically enjoy re-listening to the recorded songs.

Before you were talking about how you like having multiple songwriters. Do you write all the lyrics, or do the guys writing the songs chip in lyrics also?
Tim and I will co-write songs, but typically we’ll write our songs independently. One person will write the lyrics and melody. There are exceptions where Tim and I co-write, but for the most part, the songwriter does music and the lyrics.

When you’re writing your own lyrics, you know what place it comes from emotionally or mentally or whatever, but when you’re singing someone else’s lyrics, do you have to change your approach to how you connect with the words?
I think that because we all know each other so well, but I think we all come at the songwriting–and I obviously can’t speak for everybody else–but it feels like everyone comes from a place where they’re writing songs for the band. So, I’m not sure how personal the songs are to the writer, because they know that they’re writing songs that will be sung by me in this band, so they’re specifically crafted songs. I tend to relate to them all pretty closely. Daren will write songs sometimes from my perspective, so it’s almost like me singing this story of what he thinks about me. It’s all very intimate. We’re all very close…we’re family. If the song is written as a deep emotion for the writer, I feel like I know that person so well, I don’t really have to talk to them about it. I can feel and sense. I don’t know. All I can say is that we’re all really close, and the songs are vehicles for each other and this band, I think. 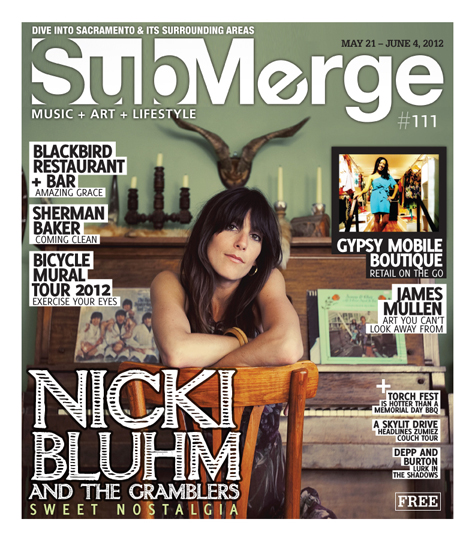 Nicki Bluhm and the Gramblers will play Marilyn’s on K in Sacramento on June 1, 2012. Tickets are just $8 and the show will get underway at 8:30 p.m. For tickets, go to http://marilynsonk.com/ or http://www.nickibluhm.com/