Now That You’re Back… 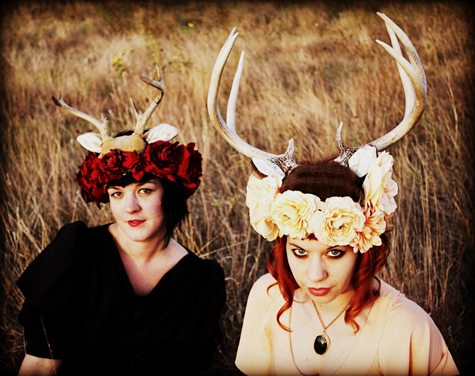 Sacramento’s Agent Ribbons may have left the River City for Austin, Texas, but they’re no doubt still in the hearts and minds of many area music fans. And why shouldn’t they be? Frontwoman Natalie Ribbons and drummer Lauren Hess are nothing if not two crafty musicians and songwriters. Drawing mainly from a limited palette of drums, guitar and voice, the duo creates songs that say so much more than their surface simplicity.

Chateau Crone is the group’s long-awaited sophomore album for Oakland’s Antenna Farm Records. The album took a year to record. Over that time, the group worked with a host of engineers such as Manny Nieto (Breeders and others) in Los Angeles, Scott McChane at The Hangar in Sacramento, Chazz Bessette at his home studio in Austin and even Mark Wolberg, who helped record the album’s penultimate track, “Rubik’s Cube,” during a blizzard in Lincoln, Neb., according to the liner notes. Was it worth the wait and hard work? Well, long story short: Yes. Yes it was.

The album starts off with the serpentine riff of “I’m Alright,” one of Chateau Crone’s most stripped-down offerings. Handclaps and Hess’s crisp drumming create a smooth backbeat for Natalie’s crunchy guitar and smoky voice. While this is a track to turn heads, it’s not necessarily indicative of what is to follow. “Grey Gardens” and “Dada Girlfriend” (the eerie video for which was directed by Sacramento’s own Chelsea Wolfe), are swooning, psychedelic tracks with wonderful contributions from now ex-third Ribbons, violinist Naomi Cherie. Her violin work haunts many tracks on the album, adding an ethereal quality to its straightforward pop song structures.

These songs are remarkably uncluttered and clearly focused. Accordion, Theremin and assorted other instruments make cameos, but what really holds true is the songwriting and Natalie’s lyrics. Chateau Crone hits its stride with “Born to Sing Sad Songs.” A soulful track in which Natalie becomes meta-critical about her own craft. She sings, “I was born to sing sad songs/That go on for more than three minutes long/And I feel another coming on/Now that you’re gone.” Fittingly, the track clocks in at exactly four minutes–as if it was planned that way. She muses, “I’d be pleasantly surprised/If for once I could write a happy love song/That doesn’t make people cry.” Though the music takes many twists and turns, this sense of loss permeates much of the album. This quirky tale of love gone wrong is followed up by the far punchier, if not equally sorrowful, “Wallpaper of Skin.” Choppy violins help launch distorted guitars and pounding drums to a beautiful crescendo as Natalie’s lyrics take a delightfully cryptic turn–tinsel tangled in innards, dirty ivory divination–as she questions, “But you think you know what it’s all about?”

What it’s all about may be irrelevant. In a note about the album, Agent Ribbons writes, “Chateau Crone will be an escape for the world’s unforgiving disdain for batty, aging crones…” Perhaps there’s some arcane concept at work here. It wouldn’t be a stretch for a group that seems to pride itself on its decidedly skewed take on pop music. What really matters is that this is a tight 10-song collection of sometimes-surreal psychedelic vocal pop. Good things do come to those who wait.