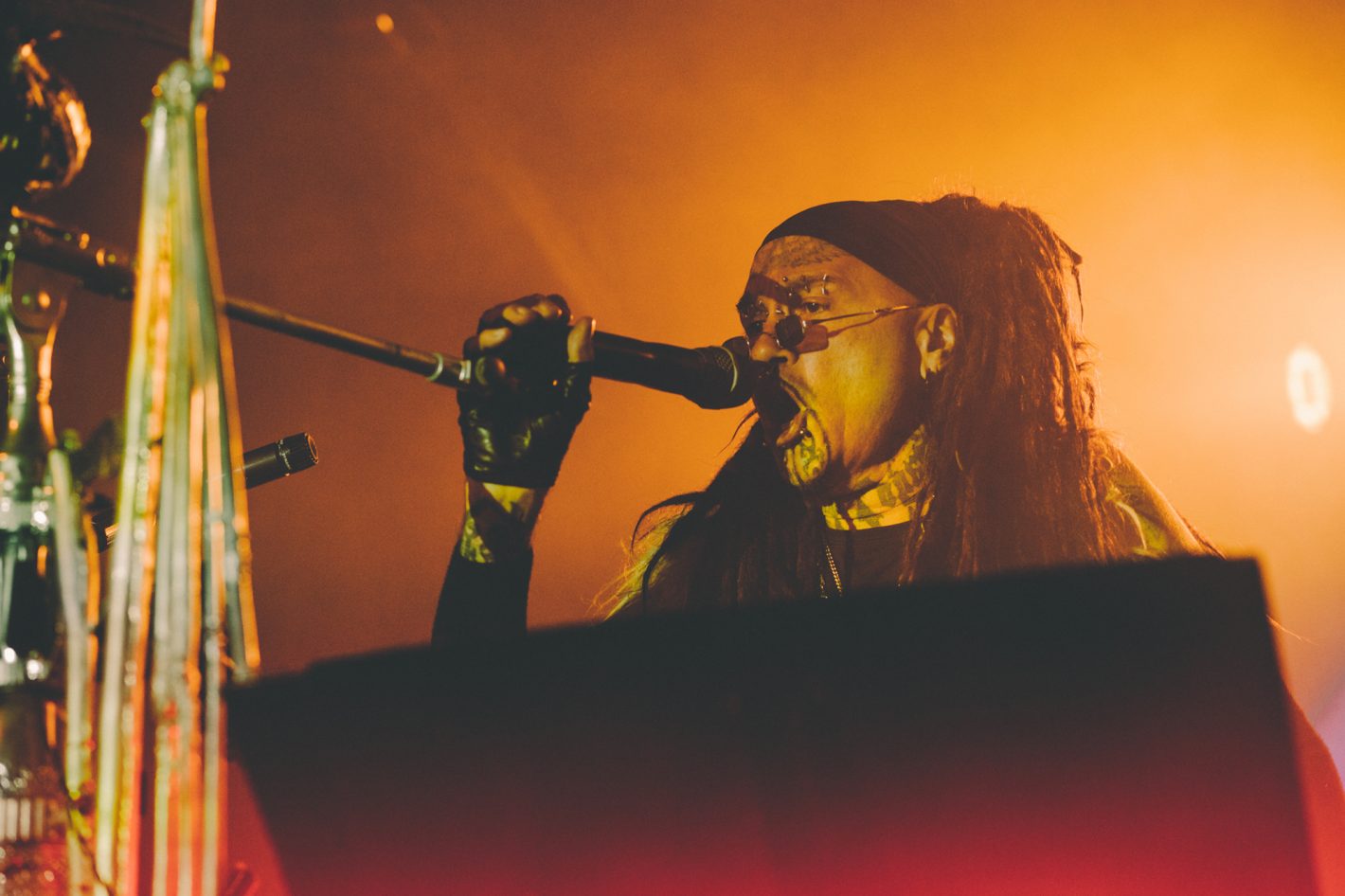 The aggressive, clanking, dystopian monster that is industrial metal has powered through the better part of four decades. That feat is due in no small part to the staying power of Ministry’s blueprint—breakneck hardcore rhythms and the theatricality of metal paired with impish, future-shock subversion and distorted railing against the powers that be. Neither receding into the ethereal, atonal smelt from which the genre was birthed nor edging toward the cabaret-ish melodrama to which some of its purveyors have launched it, Ministry has remained in the mode it has been in for most of its career—as pissed-off and volatile as a horde of flamethrowing cyborg hornets swarming an explosives factory. The targets of their wrath change with time; they’ve spent multiple album cycles taking the piss out of both of the Bush eras, and with their latest album, AmeriKKKant, they’ve set their sights on the rapid nosedive of political discourse following the 2016 election. Regardless of the political epoch, their collective sonic fist is trained on war, tyranny, oppression and the evils of state power (as long as there’s a Republican in the White House). 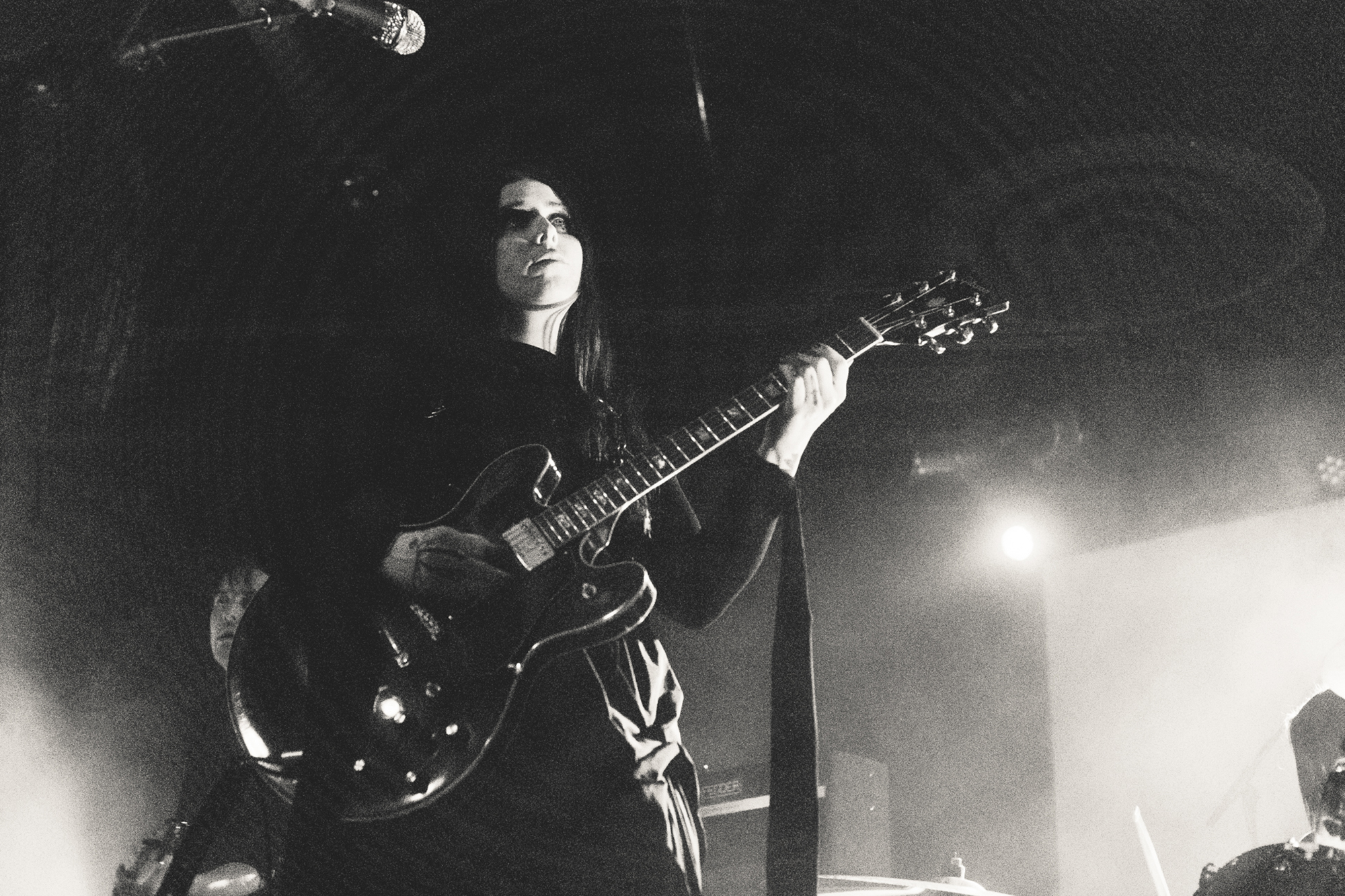 As a lead-up to this sustained apocalyptic onslaught on a Monday night, opening act and rising Sacramentan star Chelsea Wolfe is a rather subdued pairing, providing a melodic counterpoint of smoldering doom. Save for a few older songs, her set is mostly comprised of tracks from Hiss Spun, her heaviest, most “industrial” work to date. The pace is deliberate, the distortion slowly ratcheting up over Wolfe’s despairing timbre, and as she closes on 2013’s “Feral Love,” the air seems filled with a poltergeistic haze ready to ignite at a moment’s notice.

From this thematically circuitous act bearing sparse theatrical trappings, we move to its complete opposite in Ministry. Two towering, inflatable chickens resembling Donald Trump are brought out to grace either end of the stage, each sporting prominent swastikas on their chests (enclosed in the “no” symbol, of course, because yes, people are contentiously dumb enough to miss even this metaphor). Small towers of staticky TVs and an oozy neon-green glow arrive to shape Ministry’s vision of an American media nightmare, and when iconically dreadlocked (and freshly vampire-fanged) Al Jourgensen takes up his chrome demon-skeleton microphone to lead into the first bars of the eight-minute opener “Twilight Zone,” one feels they are encountering a carnival barker at the gates of hell, or the final boss of Hot Topic. 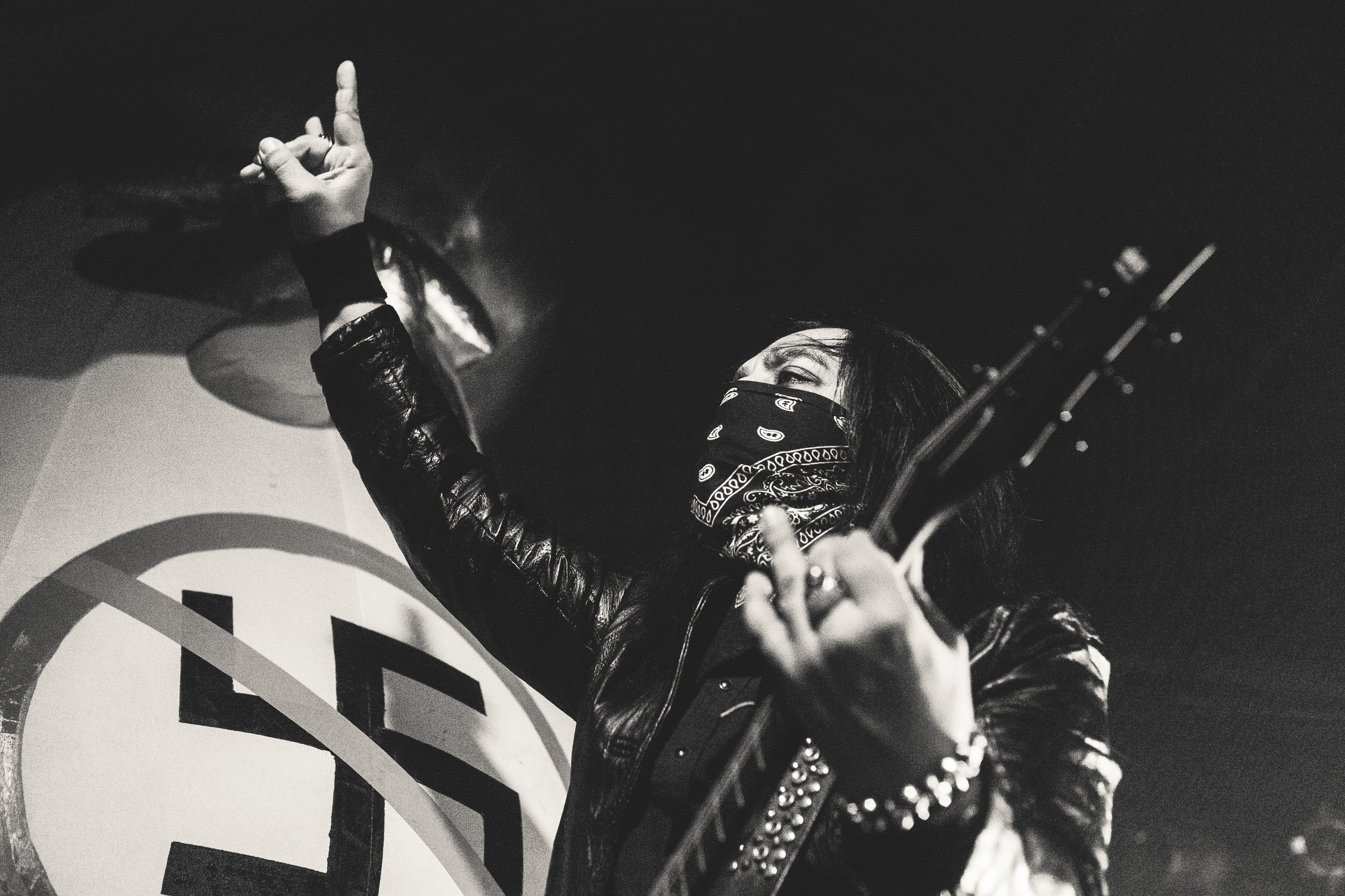 The first three-fourths of the concert track the band’s current Trump-era frenzy along with selections from their 2004–2007 anti-Bush trilogy. Their arguably least political song, “Punch in the Face,” is also thrown in, which strangely turns out to be their most politically insightful and prescient statement about the current mood in the U.S.A. At least one person is continuously shouting requests for songs from 1988 over my shoulder during this time—a typical concert peeve—but it seems to work into the all-around atmosphere, which is the cry for the utopia that never really was, the lament of a current dystopia that in some form has always existed. A highlight of this first part of the set is the arrival of guest performer Burton C. Bell of Fear Factory for the number “Victims of a Clown.” “You think clowns are fuckin’ funny?!” he berates the crowd. The gusto with which this line is delivered is enough to convert any pro-clown stragglers that might be hiding among the crowd.

In a way, the parts of the show I could consider “low points” really weren’t in terms of sheer entertainment value and surrealist capital. “Señor Peligro,” Ministry’s late ‘00s warning to Hugo Chavez about Dubya plotting to invade Venezuela and rob it of its oil, is now accompanied by news footage of Nicolás Maduro, adding up to a message that’s anyone’s guess (perhaps the Venezuelan citizens’ plot to invade the Caracas Zoo and rob it of its meat?). Then, there is the glorious rendition of their new single “Antifa,” an anthem I hope to god catches on that features balaclava-clad, red-and-black flag twirlers over Jourgensen’s refrain of “We are not Snowflakes! We are the Antifa!” What can you say? It’s a heartfelt, completely unironic showstopper coming from a guy who’s been around long enough to see tons of skinheads fuck with people at alternative shows over the decades. I can’t hold his sentiments against him anymore than I can berate him for appropriating those gorgeous “locks” of his. But after “Wargasm,” played in sync with footage of a deranged juggalo figure growling about how “the blood on TV” makes his junk feel tight, it’s about time for Ministry to take us back to the old stuff. While Ministry’s spine-ripping music continues to be fine-honed to an ugly perfection, its standard of satire has only managed to stand on an equal footing with the quality of whatever Republican president they happen to be targeting. During the last 30 years, that quality has gone from hovering around waist height to its current location somewhere beneath the floorboards where the ratshit is. 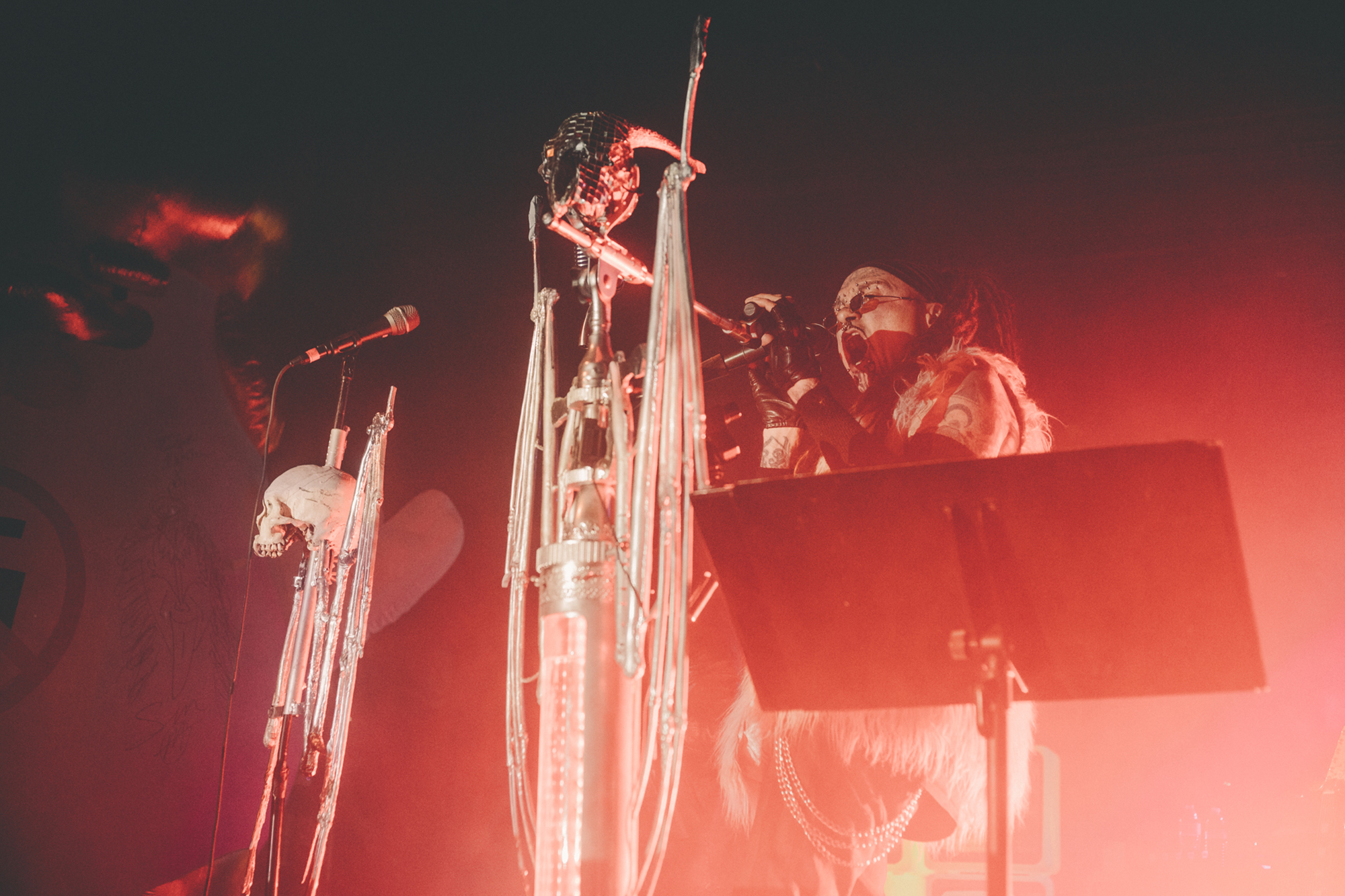 As an extended finale, we’re treated to four songs alternating from the bands’ most acclaimed albums, Psalm 69 (1992) and The Mind is a Terrible Thing to Taste (1989). The crowds collective blood gets pumping for the delicious riffs of “Just One Fix” and the power-drill mania of “Thieves.” While the entire show up to this point has been relatively breakneck, this section feels infinitely less cumbersome. After the band closes on the Matrix-soundtrack-featured number “Bad Blood,” one can’t help but revel in the chaos that the O.G. masters of industrial mayhem have delivered tonight, still high-powered after announcing five years ago that they would call it quits.

There is still every reason to show up for their fuel-injected spectacle whenever you get the opportunity. If in three years they come back to take down Dwayne “The Rock” Johnson’s conservative reign, they’ll make ghoulishly apt traveling partners for our acid-trip of a future. 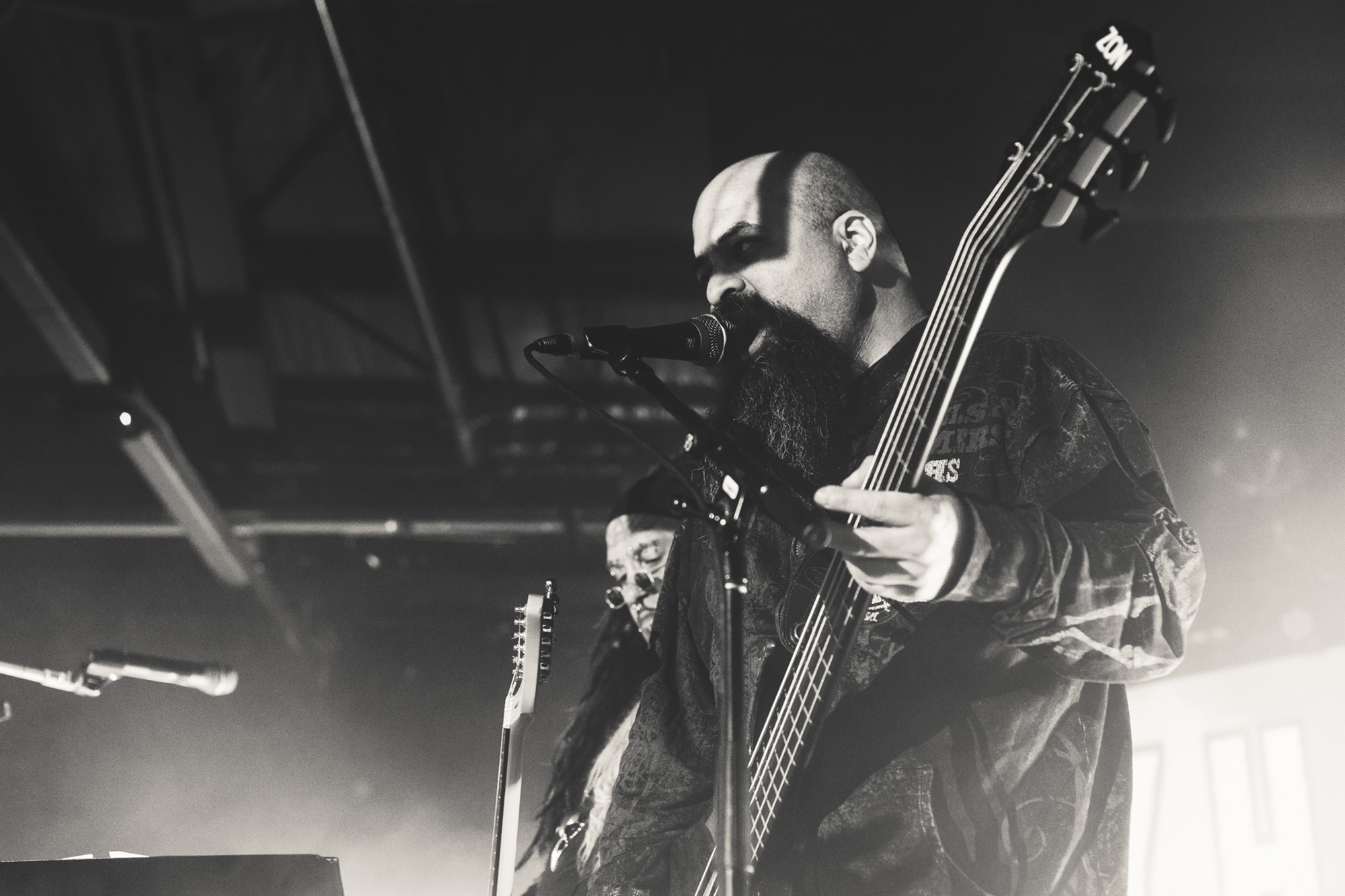