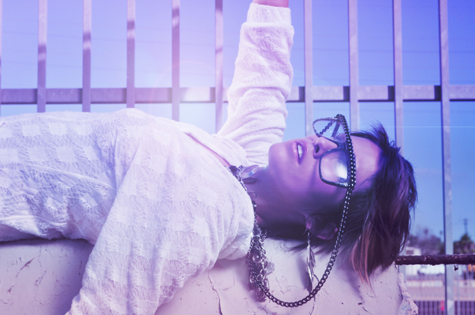 Dev and The Cataracs Tour with Usher, Ready to Take the Pop World by Storm

Small town boy (or girl) makes good. It’s a familiar story–pretty much the basis for the American dream. Rising pop star Dev fits the mold. Raised in Manteca, Calif., she was working a 9-to-5 and attending junior college before her life changed forever. An Amy Winehouse cover recorded on her MacBook that she posted on her Myspace page–a diss track aimed at her ex-boyfriend’s new girlfriend–caught the attention of producing duo The Cataracs (comprised of Cyrano and Campa). Now just a few years later, she finds herself touring the country with Usher on his OMG Tour. It’s true that in the Information Age, things happen very quickly.

Fear not, though; this isn’t the typical sad little rich girl tale. Dev isn’t crying about her normal life being turned on its ear. The luster of her burgeoning fame has yet to be tarnished, and during our interview, she expressed nothing but gratitude.

“I’m blessed and I couldn’t be happier,” Dev reports from the Rhode Island stop on the OMG Tour. “I’m getting opportunities to work hard and to travel, and it’s really fucking cool. I’d never even been on a plane like that before, and now I’m on one every day.”

Under The Cataracs’ guidance, Dev quickly became something of an Internet sensation. She sang the hook on the deliriously catchy electro-pop-infused hip-hop track “Like a G6” by Far East Movement. The single was released in April 2010 and its video has amassed well over 65 million views on YouTube. The hook from that song is also featured on Dev’s own single with The Cataracs, “Booty Bounce,” which came to light just four months later.

At the end of 2010, Dev and The Cataracs released a new single, “Bass Down Low,” a slickly produced and sexy party anthem. But the young singer/songwriter doesn’t want to be known simply for dropping it like it’s hot, as she’s hoping her upcoming album will attest. The Night the Sun Came Up, Dev’s anticipated debut, will be released on Sept. 20, 2011. On the album, you’ll get the club hits you’d expect; but according to Dev, you’ll also see her and The Cataracs moving their sound deeper, lyrically and musically.

“It’s really fun for me to write a lot of sassy lyrics and stuff like that,” she explains. “We’re young, but [the album] is my chance to show who I am and what I’ve been going through. It’s definitely a youthful album for sure. I grew up in Manteca for 20 years of my life and moved to Los Angeles and got to travel around as I turned 21. You get to feel all these little adventures, all these little journeys I’ve been going on.”

The music also takes Dev to her roots. Her latest single, “In the Dark,” noticeably diverges from the almost sci-fi sounds featured on “Bass Down Low,” showcasing horn samples and a Latin flavor.

“I’m Mexican and Portuguese, and I’m really close to my family,” she says. “The Cataracs knew that would be important. I wanted to somehow add that flavor in there and be really personal… It was important to me to do that on the album.”

Dev gave us more insights into The Night the Sun Came Up, her relationship with The Cataracs and how she and the duo are holding up on their arena tour with Usher.

The venues are a lot larger on the OMG Tour than what you’re accustomed to. Did you and The Cataracs do a lot of work on the stage show to translate your energy into a bigger room?
Yeah definitely. We spent a couple days just working on the set. Me and the Cataracs, it’s perfect when we perform together, because we’re featured on each other’s songs, and we work together almost every day, but it definitely is a little different doing it together this often. So yeah, we definitely spent time putting something special together, I guess you could say.

In an arena show, there’s not a lot of intimacy. It’s harder to make that connection with the audience. Is that something you’ve had to adapt to as a performer?
A little bit, yeah. The first day that we did this, I thought I was a lot more prepared than I really was mentally, I guess. Then I went out there, and I was like, “Holy shit, there’s all these people out here!” I love performing, though. It’s my favorite part, and usually I don’t get too nervous or shook up because it’s what I enjoy most about what I do. But these shows definitely woke my game up, that’s for sure.

I read that you used to compete as a swimmer. Does that kind of competitive mentality stick with you on stage?
It does. It’s so strange how much my tour life reflects my work ethic from being a swimmer for like 14 years. It’s real, and I guess I’m kind of grateful for dedicating so much of my life to something, even though it’s a totally different thing, because they relate in a lot of weird ways. So yeah, thank God for all those years of swimming.

I even read that you write songs at the same time you used to get up for swimming.
Yeah, it’s so weird that it worked out that way. It’s like my favorite time, it’s so strange.

Is it difficult to keep that kind of schedule when you’re on the road?
For sure. It doesn’t always happen. But when I do get the time to enjoy the morning, it’s always really nice.

I wanted to talk about the album that’s coming out. You recorded the album in Costa Rica, and I was wondering if the experience of being there played into the sound of the album at all.
We were there the whole month of January, you know, setting up the skeleton of the album. We recorded roughly around 13 to 15 songs, I think. The whole Costa Rican vibe definitely influenced our flavor on the album. There are a lot of interesting sounds and references. You can definitely tell we were in another place. It was cool to go someplace where we could relax and be open-minded and channel into a different style than what we were all comfortable with being in the city all the time. I’m really excited for everyone to hear all the different sounds and textures on the album. I hope everyone likes it.

I saw an interview where you or one of the guys said that the album goes a lot deeper than what people might be accustomed to from the singles you’ve released so far. Is that a lyrical statement, or the music?
I think it’s a little bit of both. Me and the Cataracs grew up being influenced by a lot of different genres and musicians. We were really free when we started recording this album. I work with them every day. We lived together for two years. They know what I want to come across on this album, and we were finally in a place where nobody was bothering us and in our heads and we could finally just do that. We have a lot of really good dance tracks and hip-hop-influenced electronic pop music or whatever that we’ve recorded over the years, but I never thought that millions of people would listen to. I was like 19 years old and recording in my bedroom. And now, based on the millions of views on YouTube… And it’s great. I like that I can put out these fun and sassy songs, but it was important to me to show that I am a human being, you know? I’m not just a degenerate. I got to be a little bit more in touch with my feelings for once, which is great.

Did you work with any other producers on the upcoming album?
No, not right now. Right now it’s produced and featuring just The Cataracs. I might do something–I haven’t really told anyone this I don’t think–with Timbo [Timbaland]. Me and him got along really great in the studio. I spent a few days with him in Miami a couple months ago and we worked on a lot of tracks together. There was some really cool chemistry. I’m a really, really strange individual, but we got along really well. That might happen. We’ll see. Right now it’s just The Cataracs. That was important to me, to keep it just me and The Cataracs since they’ve helped me and taught me and guided me in figuring out who I am as a human being and an artist. Whether they know it or not, those two crazy boys have done a lot for me. It was important for me to keep it in our little indie pop squad.

In that regard, since you and The Cataracs work so closely together and have a tight bond, when you work with someone else do you feel a sort of separation anxiety?
Right? Like I start throwing up [laughs]. I guess it is, but I try not to look at it like that. I’m just glad I get to write with people who know me so well, so everything comes off really real, I guess. But I don’t usually freak out too bad. I try to take little bits and pieces from every artist that I’ve met… But I only like working with The Cataracs [laughs].

Dev and The Cataracs currently are on the road supporting Usher on his OMG Tour, which hits Sacramento’s Power Balance Pavilion on May 28, 2011. Akon is also performing. Tickets can be purchased through Usher’s official website, Ushernow.com. Dev and The Cataracs will also host the official after party at District 30. Go to District30sacramento.com or call
(916) 737-5770 for details.