One Man, and Unstoppable Force 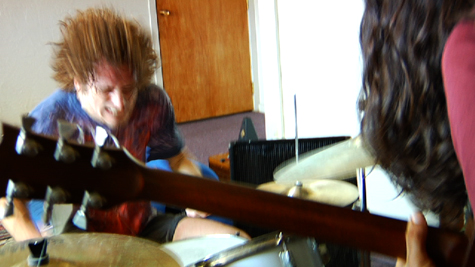 Zach Hill discusses his new album and his Tao of Drumming

If Zach Hill is anything, he’s prolific. The definitive characteristic of his drum style is constant movement, an unrelenting source of rhythm. The list of musicians he has performed with extends across the globe. This year alone, his name will accompany a drum credit on five studio releases: Cryptomnesia by El Grupo Nuevo de Omar Rodriguez-Lopez, Ice Capped at Both Ends by Diamond Watch Wrists, by- from the duo Bygones, Aggressively Humble by CHLL PLL, and last but not least Face Tat by Zach Hill himself, scheduled for release Oct. 19, 2010. He plays drums for one out of six groups on Sargent House Records alone. And there are more recordings pending, the upcoming Hella record being one. Just to catch him for a conversation, Submerge had to squeeze two hours from his week-long break between a tour of South Korea and Japan with Carson McWhirter, and an Australian leg with the Boredoms he left for before we even went to press.

Hill is aware of the all this. “Not to sound pretentious, but I’ve released over 100 records,” he said. Self-taught, he’s become a financially independent musician. He states it simply, “I’m proud of most of what I’ve done.”

But to summarize his catalog is a superficial gloss of what Zach Hill is all about. Behind a quiet demeanor lies a restless mind, stirring constantly like so many endless drum fills. We talked mainly about the process of recording the new album and how his schedule creates a disruptive focus that enables him to participate in so many projects simultaneously. We also discussed the appealing qualities of an expressive live performance and improvisation. And then he left for Australia.

Face Tat is a fast-paced album full of hard-hitting drums and a million sounds that prove difficult to catalog. Multiple musicians aided Hill in his composition. “A lot of friends definitely contributed good amounts to the record,” says Hill. “Generally when I make my own records, there’s a lot of other people involved, writing, contributing musically. We record together and by the time they hear it I’ve changed it completely, in lots of different ways. Whether it was cut up or totally deconstructed or destroyed, I take whatever my friends have contributed and make it something different.”

This process, reworking the material parts and manipulating them into new sounds, is a consistent approach to Hill’s songs. In digital recording this could lead to endless editing, yet Hill has been able to stay focused. Many of the tracks have specific structures, which the guest musicians build upon, “It’s a specific idea or sound or part that I’ll ask a friend to play,” says Hill. “Or, I’ll play myself; I’ll already have a drum track, with the song entirely composed on drums, and I’ll have an idea of rhythmically and/or melodically what I want to happen. Or, I’ll be working with a series of samples of sounds that other friends contributed while they were playing with me and I’ll flip those and change them up. It’s a sound collage style, nontraditional. There’s a lot of diversity within the record. I’m excited about it.”

One exception to this process of recycling musical parts would be “Face Tat,” which is a duet of sorts between Hill and guitarist Carson McWhirter. A YouTube video is available of them recording, which reveals little change to the finalized song.

Hill’s calendar is filled with touring, which means recording the album had to be done over a long period of time. “I recorded with my friend Andy Morin at home studios all over town,” says Hill. “Because of touring and all kinds of stuff going on, other musical obligations, it was recorded over the course of a year, with breaks. I’d work on it for a month and then I’d have to leave. I didn’t want it to be genre-hopping, but I wanted to have it evolve and touch on all sorts of sources, approaches and feelings.”

The constant interruptions never felt like an obstacle for Hill, who was able to utilize his time at home. “I like working on records in concentrated periods, having focus, and then also having space away so that you can sit on it and listen to it and get an outside perspective of what you’re doing,” he says. “I work best like that, rather than just digging myself in a hole for months working on the same shit over and over and over. Sometimes having distance keeps me from changing something that is just cool how it was at first. It can keep me from working something into the ground.”

Despite the small periods of time available, Hill was able to compile a lot of material for the album, which contains 13 songs. “I always record way more than is necessary for the most part,” he says. “I’m always recording, when I’m practicing or whatever. I’m recording right now and I don’t even know what it’s for. Once I create a deadline for myself then I think about all of the things I’ve been compiling. It’s a motivator to actually finish it. Nothing’s ever really finished.”

Next spring, Hill will have the time to schedule a tour in support of Face Tat, but he says there’s much work to be done before then: “I need to put together a group to perform that material. I’ve thought about doing raw, more abstract versions of the material. It’d be awesome as a minimal three-piece, more stripped sounding. It’s not necessary to cater to the album because that’s not going to happen–based on the way it was made. For a more literal version I would need like four or five people, probably. But it would take a certain type of person or player in order to do it.”

Hill has strong motivation to play. It’s something he’s been doing for 15 years and the drums are almost a part of his consciousness. He likens working on his craft to a bodily expression: “I don’t sit there and practice rudiments all day or anything like that. To me practicing is doing a lot of different things. It’s normal for me to practice interweaving patterns and rhythms, basically not stopping for an hour. I’m improvising in free form, or with form, in and out of time. Whatever I have in my head instantly happens on the drum set without breaks. It’s just my style or whatever. I try to play infinitely, that’s my approach to practice. Zero stopping, zero pauses. Flipping things, reversing things, in and out of everything I can think of in my mind, changing speed, changing punctuation, running through everything I feel like I know on the drums. I’m connected by the drums, being able to put all of those things in any shape or form together. By practicing my brain and my body on that level, I’m able to interlock or change any kind of beat. That’s also practicing your endurance, practicing the physicality of playing the instrument.”

His description of playing drums fluidly is comparative to stream of consciousness writing, where the author lets the text move forward in composition without intent or hesitation. Hill says, “I’m really into seamlessness of playing. There’s a sound I’m always trying to achieve of hyperfluidness, and I don’t mean that in the sense of being graceful. It’s not necessarily a peaceful fashion or a proper, correct way of playing. My favorite musicians, I can’t sense them thinking about what they’re going to do next. That’s the two things I’m interested most about playing music, particularly live. A live show is all about projecting energy.”

The musical energy that Hill admires stems in a way from his mellow external mannerisms. He places it within a space of aesthetic representation: “Just like with any art form, you’re expressing something that can’t really be expressed in any other form. We all have something in us that needs some other platform to get out. Words don’t cut it; normal interaction doesn’t cut it. Talking about it defeats the purpose of even doing it in the first place. It’s a double standard because the entire reason you do it in the first place is because you can’t talk about it. I can’t even explain what I’ve got going on. That’s the whole point.”

Hill’s experiential perspective of music is evident in his experimental works and their subversive forms. “Anything I’m involved in there’s a natural tendency to be going against the grain. I’m drawn to a contrarian’s perspective. That’s just my spirit, to not accept everything at face value. That’s just what I relate to, wanting to look at things a lot deeper and I think that’s a common thread in all different forms of music,” says Hill.

In pursuing music, Hill attempts to “find something that’s relevant, or make a statement that’s of the future, not the past. I’m not a big retro person.” And ultimately Hill is quite happy to be drumming forward into tomorrow. “It’s definitely a blessing. I’m far from jaded. I’m still way grateful and really inspired to do what I do.”