Out of Bounds, with Justin Farren

Local singer/songwriter Justin Farren talks about his music and latest album, and why touring pushes his boundaries, in the best way

Introversion arguably produces the best artists. Those who can spend hours holed up in isolation working on a project often emerge with a gem. Land them at a party or social gathering, however, and they’re quickly making a beeline to the nearest bathroom or unoccupied space.

Justin Farren is an exemplary introvert. If he’s not out backpacking or camping, then he is keeping busy on a project—fixing up his yellow truck, woodworking or writing an album in his garage. For this local singer/songwriter, touring means treading outside his comfort zone.

You might not know it if you saw him perform, but it is nothing short of a challenge.

He was in fact on tour as he was explaining this over the phone, camping with some friends in Bellingham, Wash., and prepping for a show that same night.

Touring, he concludes, is good for him. Given any other circumstance, “I’d want to just go hide,” he says. But after a show, he has no choice but to open up and talk to people.

After three or four more shows along the North Coast, he returns to the Sacramento area for his April 6 CD release show at the CSA Event Center, celebrating the release of his album Another Bluebird Day. Then he’ll continue down to Southern California to promote the album.

This is Farren’s third album. With the exception of his friends Brian Rogers on drums and Emily Kollars singing backup vocals, the album is all Farren, from the guitar, bass, keyboard and shakers to the samples of him pounding aluminum cans. This project sums up his last six months, which were spent recording and mixing the entire thing in his garage-turned-studio at his house.

There is nothing obscure about Farren’s songs. Over immaculate finger picking and slide guitar, he sings with lighthearted honesty about life’s tougher blows, compacted into three to four minute folk pop, storytime songs.

“It has these kind of heartbreaking ideas, and I think that the whole album hopefully places these in a light of appreciation,” he says. “Stand in those moments where it would be easy to be depressed, and just appreciate that you got to have those experiences.”

Farren grew up in Elk Grove when it was nothing more than fields, long before it overdosed on suburban steroids. There are no known musicians in his family, though he says there’s talk of a bad-ass accordionist amongst his ancestry. But somewhere along the way, Farren taught himself how to play music, and he’s been at it ever since.

Within the last five or six years, he’s even been able to make a living off it. He’s opened for the likes of Hot Buttered Rum, Matt Costa and Jackie Greene. He was voted “Best Lyricist” in 2010 by Sacramento Magazine and “Best Musician” in 2009 and 2010 by the Sacramento News and Review.

Farren released his last album, Songs from Spare Rooms, in 2008. Those songs were all written in the two years he surfed couches while his house was being built. (It’s worth mentioning that Farren and his now-fiancée built their house in Oak Park from scratch, inspired by a trip they made to Alaska in 2004.)

“We thought, well, let’s just build a house and not think too much about it,” he says.

It’s where the two currently reside, with three dogs, two of which are lovingly named Pickle Breath and Mr. Pig. Indeed, they have been sources of inspiration. Pickle Breath inspired the song on the album, “Sometimes I Like to Kill Things Too.” Go on to Farren’s music page on Facebook, and you will see several flattering photos of Mr. Pig (who, by the way, needs a new happy home).

“Mr. Pig, the one in all the pictures, is maybe the nicest dog I’ve ever known,” Farren says with utmost sincerity. “So I can’t take him to the SPCA, I have to find him a home.”

Other than Mr. Pig, here is an excerpt of more interesting things that came up in the conversation. 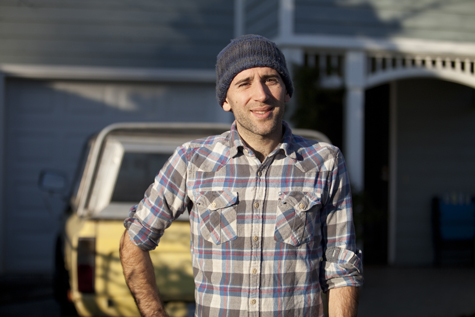 So we were talking about your place in Oak Park, how long ago did you build that?
We started in 2005. It took a couple years, we moved in in late 2007.

What prompted you to do that?
The summer before, in 2004, my girlfriend and I went and worked in Alaska in a really tiny little town called McCarthy, just as something to do. We drove up and we worked in this little town, and a lot of the people up there build their own homes. Over the five or six months that we were there, we were talking to a lot of the locals and kind of getting inspired, like that might be some cool thing to do. We decided we wanted to try it when we got home.

I read that you consider yourself a little bit of an introvert, so I was wondering if touring was a challenge.
Oh yeah, it’s a huge challenge. It always has been and I think it always will be… The more tours I go on, the higher my threshold gets. I am able to comfortably sleep on a stranger’s couch and wake up and make them breakfast, and have a morning conversation with someone that I don’t know. Fifteen years ago that would have been mortifying and terribly difficult for me to even imagine doing.

I think maybe that’s the best thing I can do as a human being, is hopefully raise that threshold. Because the threshold is higher, I’m able to learn from more people and be around new ideas and broaden my horizons. So touring represents all of that, all at once to me, because I’m out and I’m sharing something that’s so important to me with people who have no idea who I am a lot of the time. It forces me to swallow my pride and just do my best and play the song, and hope someone gets on the page and buys a CD or whatever.

Do you generally write first-hand accounts when you write songs?
Yeah, in general. There’s a lot of first-person and talking about stuff that is affecting me. I’ve always admired writers who can read a book and write a song about a character in the book. I feel like I’m a selfish songwriter in that way, I’m always just writing about myself. But that’s kind of all that I have, that’s what comes out all the time.

Your music was featured on Laguna Beach?
Yeah, one of the songs I wrote was featured. It’s from the first album. It’s a song I wrote about my band breaking up. I had a piece of shit car, and I didn’t have much going on in my life. And they played that song during a scene in Laguna Beach when they were complaining about their car, and they were driving some fancy Escalade or something, and they were talking about how their car sucks. It’s an awful show. It’s terrible. 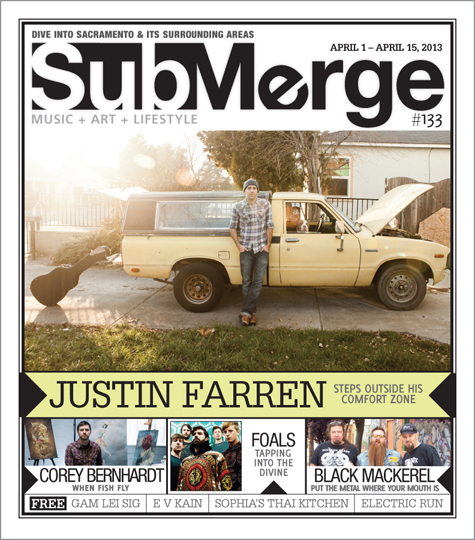 Justin Farren will celebrate the release of his latest album Another Bluebird Day at 7 p.m. on April 6, 2013 at the CSA Event Center, located at 1275 Starboard Drive in West Sacramento. For more info and to order tickets, go to http://justinfarren.com/ or http://www.csaeventcenter.com/