One World, One Sound 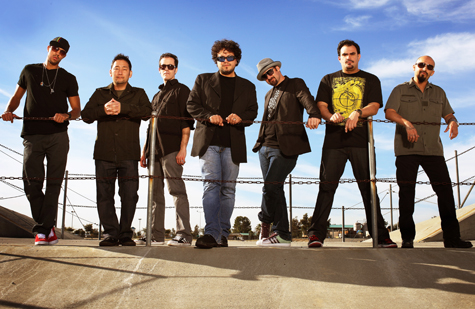 Multi-tasking. It’s an ungodly buzz word that has more or less come to define our modern existence. Job titles now seem to be a never-ending string of hyphens or slashes; Web browsers allow for infinite tabs; that little waterfall thing in the upper-right corner of your Facebook page lets you know when one of your friends likes a photo of someone you’ve never even met. You’re busy. We know. So is Ulises Bella of Los Angeles-based band Ozomatli. When Submerge caught up with him, he and the band were hard at work on a variety of things.

“We’re not very good at multi-tasking,” Bella says with a big laugh. “We’re trying our hardest, though, to multi-task up in here.”

Bella reveals that the band has just started making demos and setting into motion a new Ozomatli LP, which would be the band’s first studio album since 2010’s relentlessly groovy Fire Away, an aptly named album that boasts an arsenal of sounds both exotic and domestic in flavor. However, at the moment, Bella (who contributes his talents on saxophone, keyboards and other instruments) and company are working on a project with a younger audience in mind. In between their rigorous touring schedule, which sees them on the road most weekends, at the very least, Ozomatli has been working on their first children’s record under the moniker Ozokidz. This isn’t a radically new idea for Ozo. Bella says that the band has “always been down for playing for kids and interacting with kids,” but as members of the band had their own children, making an album for kids seemed to make sense.

“Our fans are getting older, so a lot of them have kids, and what really put it over the edge was when we were the super music friends for a couple live shows of Yo Gabba Gabba,” he says. “That really made us say, ‘We have to make an album,’ because a lot of our music already kids relate to a little bit.”

Reminiscing about the music he grew up on, the stuff that he gravitated toward when he was a child, Bella speaks of a rich personal musical tradition. As could be inferred from Ozomatli’s music–a blend of, well, just about anything: Afro-Cuban and tropical rhythms, reggae, hip-hop, pop, good ol’ rock ‘n’ roll all deftly woven together with positivity and a purpose–Bella’s musical upbringing was quite diverse. Through his father, he learned to gain appreciation for the great composers, such as Bach and Vivaldi.

“A lot of baroque music really stuck with me,” he says.

Beyond that, the music of his parents’ heritage and popular music also played significant roles.

“My dad was from Spain and my mother was from Mexico, so my mom was super into Trio Los Panchos, a lot of Beatles, obviously, a lot of Beach Boys,” Bella says. “There’s this party music from Spain called rumba flamenca. The only thing I can compare it to is the same beat as The Gypsy Kings, but less commercial-y, but it’s very much party music. So all that kind of stuff was in me. Also, my friends at the time, the kids I was growing up with, were very much into breakdancing and break dance music, so a lot of that electro hip-hop sound, kind of Kraftwerk vibe type stuff, really resonated with me, and to this day I’m into that stuff.”

This sort of diversity, as well as the varying backgrounds of Ozomatli’s six other regular members, plays a huge part in the band’s songwriting process, which Bella describes as pure experimentation as to what styles will blend the best.

“When we were in each other’s presence, the band was almost like a musical conservatory,” he says. “Everybody came from these different traditions, and there were a lot of things each of us didn’t know about. So, whereas one guy probably listened to reggae all his life, he probably didn’t know shit about cumbia. But then another guy probably knew a lot about cumbia and tropical music, but didn’t know much about reggae. In between that, there was kind of one of those things where a guy was playing a cumbia, but to him it sounds like a mutated reggae song, so he’s playing a reggae bass line over it, and in a weird way it shouldn’t fit, but it fits.”

And Ozomatli never stops gaining new influences. As they live, grow and experience so too does the band’s music.

“A lot of it also has to do with what people are into at the moment,” Bella explains. “Obviously when we first started on the first album, we were super influenced by Afro-Cuban music, and the hip-hop influence was huge because of Chali 2na and Cut Chemist, the world music vibe of putting in tablas and all that stuff. And through our travels, especially through the country and through the world, you start picking up different things, slowly those influences start going into the music too.”

Bella says the Ozokidz album is about 95 percent done, but still doesn’t have a firm release date, but it will be released on Hornblow Recordings/Megaforce/RED, which has also released They Might Be Giants’ children’s albums. In the following interview, Bella talks about some of Ozomatli’s interesting experiences working as U.S. State Department Cultural Ambassadors.

Speaking of your travels, you guys visited Nepal a while back. I’ve always wanted to visit there, and I’m not sure why. I think it was because of Raiders of the Lost Ark. What was that like, and were you exposed to any of the local music there?
Totally, and the crazy thing about Nepal is that it was one of our first trips as cultural ambassadors, right? We show up in Nepal, and it was completely coincidence, the day we get there is the day this huge religious festival called Shivaratri, which is all about Shiva and millions of motherfuckers from all over India and all over Nepal come to this temple to do offerings. The lines that go into these temples are miles long. Now the other thing that distinguishes this festival is that all kinds of cannabis use is legal for that day, so you see all these kids rolling up these monster spliffs, and you’re like, “Whoa, what’s going on here?”

And then, trip out on this. This is like some National Geographic shit. We were like, “Whoa, what a party!” It’s really psychedelic because there are all these speakers blaring these chants. It’s fucking bananas. Then we end up in this courtyard that the government set up for the sadhus, who are Hindu holy men. Now these cats basically renounce all material items and shit–loin cloths and dread locks, bro. They reserved this square strictly for them just to get high. You walk in there, and you’re tripping out, and they’re asking you to come in there and smoke. They’re like, “No, please, sit down.” They have these huge bowls of weed… It was quite a scene.

And when we were there, there was a cease fire between the Maoists and the government. I guess every other day in Nepal there are general strikes. We were really tripped out, like this is really an electric environment.

When we played the show, you know how there’s the railing between the crowd and the stage?

Yeah, where the photographers sometimes stand.
Exactly. Dude. The gate was about 100 feet away from the fucking stage. We were like, “Why is it so far away? How are we supposed to connect with this audience?” Then the dudes who are breaking it down are like, “Look, if for any reason the crowd doesn’t like you, or you have technical difficulties and you can’t get your shit together, they’re just going to start throwing rocks at you.”

I’d just gotten food poisoning, so at this point, I’m sick as a dog. I’m like, well, fuck it. Even if they throw shit at us, we’ve got to bring this barrier closer to us. This is just ridiculous. I think we got it 50 or 60 feet away from the stage, played the show, and it’s estimated over 10,000 people were at this show, and it was one of the largest congregations of people outside of strikes and politics and all that kind of shit that was going on. It went off really really well. It was old people, young people, all kinds of people.

The thing is, going into Nepal, I knew that maybe 10, 15 people tops knew who we were [laughs]… But it’s an amazing litmus test to see if your music stands on its own and can just communicate, because we just played, and people dug the music and reacted to it immediately. So it wasn’t the hype of Ozo, or our legacy or our reputation didn’t precede us.

How did you get involved with the cultural ambassadorship, because that’s a government appointment, isn’t it?
Basically what happened was this woman hit us up about it to renew it, and it was at first a big point of debate with us, because obviously there was a government connection, and we were still in the middle of the Bush administration, and it was like, how do we want the world to perceive us and how do we want the world to react to us? Will they think that we’re peddling bullshit, you know? So a big thing with us was that we were really sensitive about how we were portrayed, and we were really sensitive about local interests. A good example with that was Nepal, there was one person there who was like, “They’re always striking here. They’re shutting down their country. Maybe you can talk to the kids about how it’s not such a good idea.” Actually, I was kind of jealous of them, because they can hold the reins of power and immediately take control of society. I don’t even think that there’s been a general strike here in Los Angeles. There have been times when demonstrations have shut down the city, but I was of the mind that I envy these kids, that they’re able to organize like that and shut things down.

Well, you guys formed at a labor demonstration too, didn’t you?
Right. That was the other thing. We were like, “Are you sure you want this band to do this kind of work?” For me it was about creating our own story and creating our own connections. As much as we have stereotypes about these countries, they have stereotypes about Americans too, and why not break down these stereotypes and show we’re more the same than we are different–especially when it comes down to common people, working class people. The same shit some guy has to deal with in Egypt is probably the same shit some dude in the Midwest has to deal with.

It’s true. There are little differences, but the big things are the same. Everyone has to pay rent and make sure there’s food on the table for the kids and stuff like that.
Exactly. There are tons of things that divide us, whether it’s our governments, our religions, our outlooks on society, but when it comes down to it, everybody needs a place to stay, clean water, clean food, education. And that’s the thing in the United States that we take for granted.

Are you still in the position now?
It’s kind of died down. We did a lot of work for a while. We visited a lot of countries that a lot of bands have never been to, and I think we were just like, “We did this work, but now we’ve got to focus on some other shit real quick.” 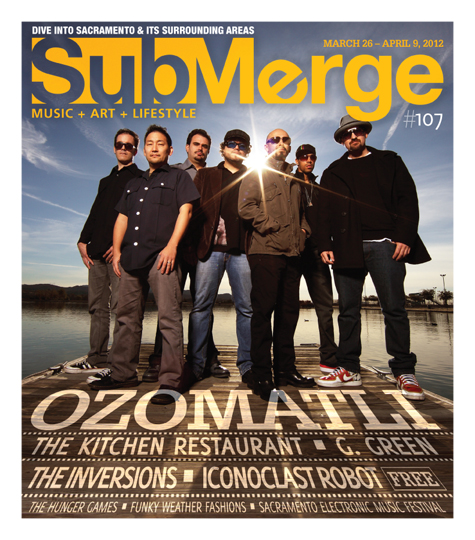 Ozomatli will play Ace of Spades in Sacramento on April 6. Doors open at 7 p.m. and tickets are $20. They can be purchased through http://www.aceofspadessac.com/. For more info on all things Ozo, go to http://ozomatli.com/