We’ve said it before and we’ll say it again: there must be something in the water up in the foothills because good Lord there are a lot of talented musicians up there! A young bluegrass/Americana band from Grass Valley made up of four siblings (ages ranging from 13 to 20) called Paige Anderson and the Fearless Kin are the latest to completely blow our minds. Paige is the eldest sibling and songwriter of the group, also playing guitar and banjo. Aimee plays fiddle and is a master at vocal harmonies. Their younger brother Ethan plays stand-up bass; and the youngest sister, Daisy, started out on the fiddle at age 3 but nowadays plays the dobro (a particular brand of resonator guitar, sort of like a lap steel).

It’s no surprise that this group is so damn good at such young ages, as they have all been cutting their teeth touring and releasing albums with their parents under the Anderson Family Bluegrass moniker since 2004. They even played Hardly Strictly Bluegrass, Wintergrass and other reputable festivals and venues around the United States. Now, continuing on without Mom and Dad (although they still travel with the kids and occasionally hop on stage during shows), Paige Anderson and the Fearless Kin are getting ready to release their second full-length album of original material called Foxes In June on Dec. 2, 2014, and will celebrate with a dual album-release show with Halfpence and Haypenny on Dec. 7, 2014, at Main State Theater (314 W. Main Street, Grass Valley). 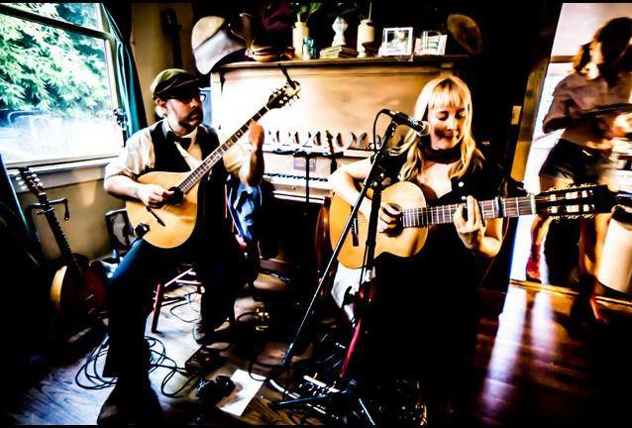 Halfpence and Haypenny are yet another wildly talented group from the foothills (Nevada City to be exact) who are getting ready to release their debut album To Hold a Candle To The Devil. H&H is made up of Eva Riihiluoma (Classical Guitar, Mandola, Vocals) and Sage Arias (Irish Bouzouki, Banjo, Mandola, Hurdy Gurdy). They have a self-described “old-world inspired folk” sound, performing both originals and unique versions of folk songs from England, Ireland, America and more. Learn more about both groups and order their new albums at Thefearlesskin.com and Halfpenceandhaypenny.com. Their dual album-release show on Dec. 7 starts at 7:30 p.m. and is $15 for Center for the Arts members and $18 for non-members. Tickets can be purchased at Thecenterforthearts.org