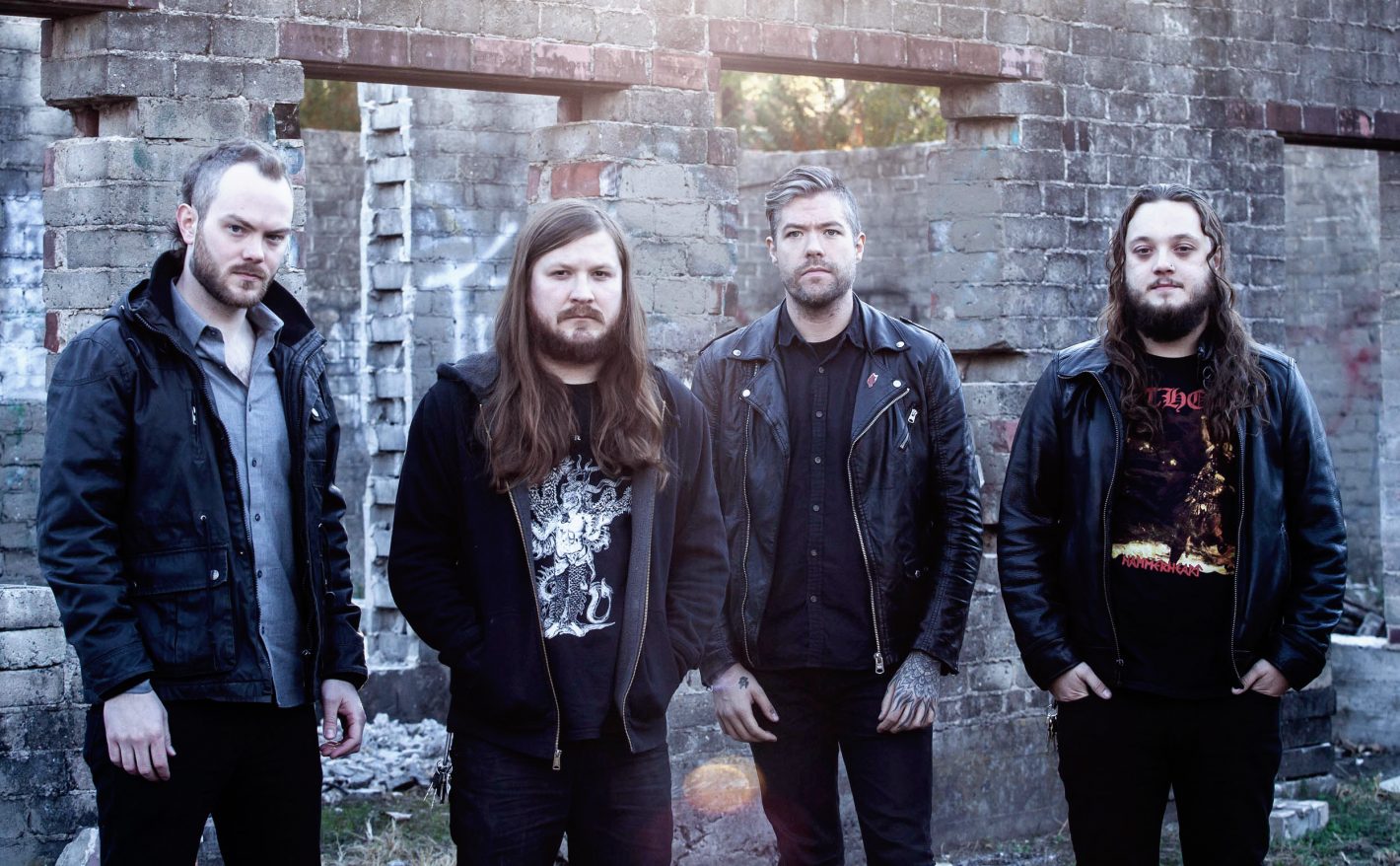 With a name like “metal,” you’d expect the heavy music genre to be a bit rigid and stubborn, and in some ways it is, but bands like Pallbearer prove that metal’s edges can be, and perhaps should be, malleable.

Pallbearer’s latest album, Heartless, the band’s third full-length for Profound Lore Records, was three years in the making, and it’s clear that the time was put to good use. Heartless is as intensely technical as it is beautifully ethereal. Songs such as “Thorns” combine searing riffs with an almost airy sense of melodicism, tempering the sharp, meticulously precise edges of Pallbearer’s musicianship with a relatable feeling of anguish. According to the band’s bassist and vocalist Joseph D. Rowland, Heartless finds the band accomplishing some of the goals it set out from its inception.

“I would say Heartless is the culmination of all the things we’ve been talking about for years and years, like the direction we wanted to head, which is combining the hyper melodic and tragic sounding early ‘90s doom metal stuff with basically every other kind of music we enjoy—within reason, but also without limits,” Rowland said in a recent interview with Submerge before he and the band headed to Oceania for a string of dates in Australia and New Zealand.

“The way that Heartless ended up as sort of an artistic statement,” he went on to say. “It’s something that we’ve been discussing internally and honing in on for eight years now, basically since we wrote the very first music for Pallbearer … Finally, we’ve had enough practice by now from touring so much that we were able to pull it off.”

After the band returns from overseas, they will embark on a string of North American dates as headliners and also in support of French metal giants Gojira. The band will kick off their tour, which will last through the waning days of summer, in Sacramento at Harlow’s. In anticipation of one of the most notable metal shows of the season, we spoke with Rowland about touring, his new album, fantasy art and bands named after places—you know, the best things in life.

You’re about to embark on a string of dates in Australia and New Zealand. Is there a good metal scene in that part of the world?
I would say it’s one of the best. People seem really into it. People seem to be really enthusiastic about going to shows out there. When we played Australia before, basically every show was a barn burner. It was fun.

Do you find that it’s the same in the States for you guys or are the crowds different?
It just depends on where we’re at. There are definitely some cities that feel almost like a party vibe instead of just a normal show. I think it has a lot to do with whether weed is legal …

So you guys slay it in Colorado, then?
[Laughs] Yeah, and in other places.

I’m a little jealous you guys are going to New Zealand, because I think they still have the Hobbit village set up from Lord of the Rings.
I don’t know if we’ll have time to see that, but that would be cool.

I read in a review of your latest album that you’re sort of the hype man on stage. Do you feel that that’s your role in the band when you’re playing live?
Honestly, I think all of us feed off the energy the songs have live. We may not seem like we’re the most energetic band on record, but the pace of the songs definitely picks up live. I think all of us leave it all on stage. We’re really trying to put a lot of ourselves into the music, so I can definitely see how that might come off as being the hype man of sorts. I have always put as much of myself physically and mentally and metaphysically into the music.

I’m new to your band. Do you find that more and more people are starting to become aware of your music? Heartless has been getting great reviews, and you also just got the Best Underground Band Award from Metal Hammer a few weeks ago. Do you find that your audience is expanding now?
Yeah, I do feel like it’s expanding … A lot of our early fans, I think, have started to drift away just from the fact that we’re not necessarily playing the same style of music 100 percent anymore, which is understandable. If people got into us from the sound that we started out with nine years ago, I don’t blame someone for deciding we’re going in a direction that they’re not looking for. At the same time, we’ve had aspirations of what we wanted to do musically for a long time. Some people understand that and they like the direction, and some people don’t, but I think what we’re doing now has drawn in people from a lot of different angles. It’s not just super deep underground metal fans any more. It’s people who like classic rock and prog rock and things like The Cure and Smashing Pumpkins.

Like I said, I’m new to your band, but I loved Heartless. It’s cool to hear you say “without limitations,” because that’s honestly the first thing that popped into my head when I was listening to it. The songs have an expansive feel to it. “Lie of Survival” was my favorite track on the album. I was hoping you’d be able to talk about how that song came together.
I was sort of the lead songwriter on that song, and I wanted to synthesize the melancholic, slightly hopeful, but mostly downcast sound that we’ve had and mix that with Asia or Toto … like if one of those bands were just really, really downtuned. Basically any band that’s named after a place—Chicago, Boston, Asia—any of those bands, if they just walked into the studio and all of their guitars were tuned to drop A instead of standard. That’s sort of what I wanted to accomplish with that.

It’s funny that you say that, because all those bands that are named after places are some of my favorite bands.
[Laughs] Awesome!

Like, Boston is near the top. Maybe that’s why I liked the song so much.
Another one is Kansas.

Kansas is great. I saw an old clip of them performing live in the ‘70s or something. And I thought, wow, you can tell this is a band from before the MTV generation, because none of them are good looking, but they just kill it.
That’s another example of a band that we were aspiring to be like on this record, because everybody in the band does vocals really well, and they’re, like, shredding while they’re singing perfectly. They didn’t have pitch correction back then. They didn’t even really have stage monitors or anything like that, but they were just really good. That was our motivation.

I was really into dragons when I was a kid and my first exposure to Asia was seeing that awesome album cover they had of the sea serpent coming out of the water. I was looking at the covers for your band’s albums, and they sort of had a similar feel—sort of fantastical images. Are you influenced by that sort of thing outside of music, like fantasy literature or artwork or whatever?
I wouldn’t say that it has a direct correlation to what we write about as a band, but as people for sure. Like, that Boris Vallejo artwork and Roger Dean, who did all of the Yes artwork, have been a massive influence on us.

Your last album, Foundations of Burden, came out in 2014, and Heartless was just earlier this year. Was there a lot of practice that went into recording these songs?
We spent a ton of time either separately or at home—I don’t live where everyone else does. I live in New York City. I spent a ton of time in my bedroom practicing all the songs. In the month and a half or two months before we went into the studio … I was flying down once a month for at least a week so we could get together and run through the songs as many times as we could and make as many tweaks as we needed to before we went into the studio. And still, I wish we would have had even more time. I think we would have been able to record the record in less time had we had even more time to get everything absolutely perfect. There were parts that I had to keep playing over and over in the studio, because they’re fucking hard.

The rest of the guys still live in Arkansas?
As of right now, we’re pretty spread out. The other guys [Brett Campbell (vocals/guitar) and Devin Holt (guitar)] live in Little Rock, and Mark [Lierly, drums] relocated to Denver.

Does that make things more challenging?
Honestly, being spread out helped us focus a lot more intently, because the time we had together was limited. That meant that every moment was of the essence. I think it ended up being a beneficial thing. We’ll see, going forward, but I don’t see it becoming an issue.

Catch Pallbearer with special guests CHRCH live at Harlow’s on July 29, 2017, for what is sure to be a mind-warping performance. This is a 21-and-over only show. Tickets are $16 in advance and can be purchased online at Harlows.com. Doors will open at 8 p.m. Check out an album stream of Heartless below.