Take It or Leave It

Panic at the Disco Broaden Their Horizons

Las Vegas rock band Panic at the Disco isn’t afraid of change. Even though the band’s 2005 debut, A Fever You Can’t Sweat Out, has topped charts, sold millions of copies worldwide, earned them an MTV video music award for Best Video and sent them on sold-out tours all around the globe, the young group opted not to stick with the same formula for their second release, Pretty. Odd.

“We all kind of felt like we needed a fresh start rather than try to meander our way through stuff that we weren’t 100 percent happy with,” recalled drummer Spencer Smith.

Soon after that realization the band wrote the album’s first single, “Nine in the Afternoon,” a bouncy, psychedelic song that was drastically different than the material that had jump-started their career two years before.

“We were just really excited about it,” Smith said of the new material. “But then we weren’t really sure what anybody else would think.” Regardless of whether or not their fans were going to get it, the band was finally doing exactly what they wanted to do and exactly what they needed to do.

Before embarking on Rock Band Live, Submerge caught up with Smith to talk about plane crashes, turning 21 and eating shit on old school high wheel bicycles.

I’ve read somewhere that way back in the day, before Panic at the Disco, you used to play a lot of Blink 182 covers with Ryan. What are your thoughts on the tragic plane crash that Travis Barker was involved in recently?
Oh, it’s horrible. I was at home and woke up and saw like the front page of Yahoo, I think. It’s pretty amazing that they were able to get out. It was just completely shocking. It was scary obviously because we’re at airports all the time.

Do you guys fly from show to show very often?
Not in the U.S. when we’re on a tour bus, but we just came from Southeast Asia and Australia and there all the places are too far apart, you have to fly. You know, but that’s the thing; those private jets have a lot more chances of things going wrong where if you’re on the bigger ones, they are supposed to be safer. We have ridden in a plane that size though.

Yeah, fuck small planes. On a much happier and lighter note: happy belated birthday. You had one earlier this month right?
Yeah it was on the 2nd [of September], it was my 21st birthday.

Uh-oh, 21? Did you go out and celebrate or have a big party or anything?
Well, it was a couple days after we got back from being on tour for a month. Ryan’s birthday was on Aug. 30, and we were in Auckland, New Zealand, so we didn’t really do anything there. We got home the next day. So yeah, we went out, but we didn’t get too crazy because we were just coming back from a month on tour, you know? So it was good to be like, “Alright, we’re done!” and then just not even do anything for the next five days. But I have been able to go to the grocery store and buy beer [laughs]. Yup, for the first time. So I am pretty excited about that.

Congrats. That’s a big step in life.
Thank you.

I want to talk about your most recent release, Pretty. Odd. It’s been months now since its release and it’s definitely a very different album than your first. How would you say that people have reacted to it overall?
I didn’t really know what to expect during the time we were writing and recording because we all kind of new that it was different. But it was because it had been a couple years since we had really written songs and Jon [Walker] our bass player wasn’t in the band on the first album so writing with him was different. Obviously the music we had gotten into over those two years really changed what we wanted to do.

At least we knew that the songs were coming from the same place, we were just trying to take from our favorite bands at that time. We were writing exactly what we wanted; it was just kind of what we had to do.

I’m sure there are people who love the first album and hate the second record that have no idea why we are even existing anymore.

That’s the nature of music, man; you can never gauge how it’s going to affect somebody, you know?
Yeah. And you and can’t ever please everybody, because if we had written the same record, then we would have had all the people saying, “Oh they just wrote the same record again! That’s boring. Blah, blah, blah.” I guess this way at least, you know, it allows us now to do really whatever we want to do.

You tracked most of the record at home in Las Vegas but did string arrangements and mixed the record at the legendary Abbey Road Studio in London. How was it working there?
It was surprising for us. Rob Mathes, the guy who produced our record, was really passionate about wanting to at least do the strings there. He really likes the musicians there and the way that it sounds in that studio. He had worked there before. And we were like, “Oh man, Abbey Road. That’s cool.” Because, you know, we were able to afford like two days. But then we were trying to find someone to mix the record and we had gone through a couple people who weren’t able to do it, but then [Mathes] brought up this guy Peter [Cobbin] that he had known from working at Abbey Road so many times. We called him up and said, “Alright well, you know, we’re not going to be able to pay you as much as you’re getting paid to do the soundtrack for Lord of the Rings or something, blah, blah, blah.” He was really excited about it. Hopefully we will be able to go back some day and record in there.

I was watching the video for “That Green Gentleman” the other day and noticed that in one scene someone totally eats shit while riding one of those old school high wheel bicycles. Who was that? That kind of looked like it hurt.
That was Jon [laughs] and that was the funniest part of that day. The scene where we are in the boat—it was freezing outside when we were filming. It was so windy and we were sitting out there like, “Fuck, this is horrible.” But then we got on those bikes and the sun came out. We rented them from this company in Hollywood that had just rented a whole bunch of things for the set of There Will Be Blood; they had all this stuff, all these props. So they had these bikes, and they had three or four guys there that kind of knew how to ride them and showed us how to get up on them, but you know, those things didn’t even have brakes.

Yeah, those look gnarly to try and ride.
Yeah and to get off, that’s the hardest thing. To get on isn’t that difficult. Jon though, he ate shit like four times [laughs]. That’s awesome, I’m glad you saw that.

You guys have covered a lot of really rad bands like Smashing Pumpkins, The Band, Radiohead, etc. Are covers something that you guys generally enjoy doing?
Oh yeah, we love it. I don’t know how any band wouldn’t love it. If you’re a musician, you obviously love music, and you’ve got your favorite bands and you listen to music all the time and try to become a better songwriter. But, you know, you get tired of playing your own songs.

Before we are done I want to talk about the Rock Band Live tour coming up. What can fans expect out of your set? Is it going to be a big, elaborate stage show like past tours? Or will it be more stripped down?
I think it will be kind of a mixture. It’s going to be a little bit more similar to the previous tour we did this year, but on a little bit of a bigger level. We’re going to be able to play a couple new songs that we didn’t play before, and we want to learn a new cover song, too. We want to try to do things that we’ve never done live. 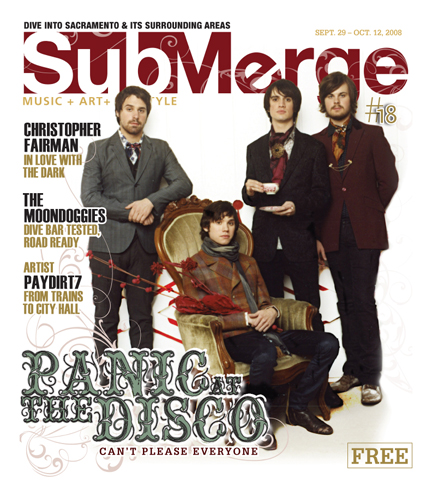