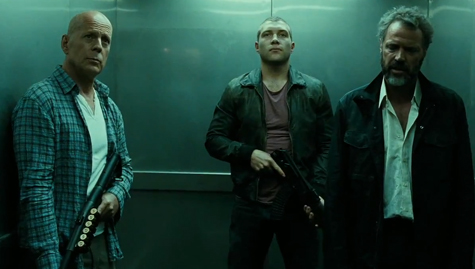 A Good Day to Die Hard

When John McLane first burst into the American film lexicon in 1988’s Die Hard, we had a different breed of action hero. Played by Bruce Willis (whose major claim to fame was the prime time dramedy Moonlighting), we were given a counterpoint to the Schwarzeneggers and Stallones of the world. McLane wasn’t a juiced-up Neanderthal. He was just an honest cop from New York, trying to make amends with his wife around Christmas time. This was someone we could relate to, but instead of just being a cool all-around guy, he could also dispatch bad guys with a quickness. Die Hard spawned a series of sequels, all with Willis reprising his role, but with the latest and fifth film in the series, this franchise is starting to show its age.

First of all, it’s mostly humorless. At its start, it feels like a bargain basement Bond flick as we start out in a foreign city (Moscow), and we’re inundated with tedious intrigue. John’s son Jack (Jai Courtney) is working for the CIA and has found himself wrapped up in some pretty serious shit. There’s some sort of political demagogue with his sights set on world domination and a cover-up involving weapons-grade uranium that dates back to the Chernobyl disaster.

Enter the senior McLane to the rescue. He flies to Moscow, promising his daughter he won’t get into trouble, to find out what’s going on with his son, who now finds himself in a Russian prison. John gets there in time to save Jack from incarceration (and most likely worse) but ends up complicating the situation even more (as if that were possible), much to Jack’s chagrin.

A Good Day to Die Hard does have a few things going for it. First of all, it’s short. At 97 minutes long, it is by far the shortest in the series. This is a blessing as there’s never a dull moment. Nary a minute goes by without gunfire, an explosion or explosive gunfire. There are elaborate car and helicopter stunts and it seems the only way the McLane boys can get off of a rooftop is by plummeting through glass and/or scaffolding until they reach a soft spot on the ground below.

In that regard, it’s a good action movie. Unfortunately, Die Hard set the bar high back in the late ‘80s. That film not only had a wisecracking hero we could all root for, but it also had a great villain we loved to hate. Alan Rickman as Hans Gruber should go down as one of the best and most memorable heel performances of all time. He was dastardly to be sure, but also human, witty and interesting. A Good Day to Die Hard doesn’t have such a luxury. In fact, it’s hard to really know who we’re supposed to be rooting against until the very end. The film has some twists and turns, but really, it just feels like the filmmakers are over thinking it.

Look, don’t try to dazzle me with your plot devices, because your dialogue is weak (if I had to listen to one more “sins of the father” style heart to heart, I would’ve thrown myself off a building). Just give me ol’ Johnny Mac shredding through a well-funded and calculating horde of baddies, and I’m a happy guy. It’s what made Die Hard my favorite Christmas movie of all time. It also made me proud to be an American.