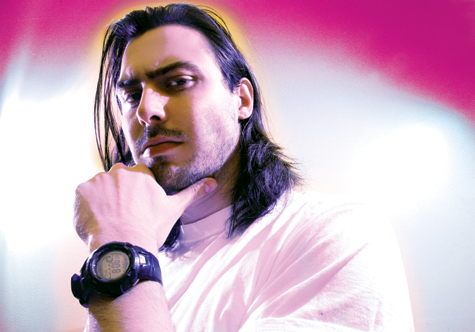 Andrew W.K. puts a tumultuous five years behind him

Hardships can be blessings in disguise. At least, that’s how Andrew W.K. sees it–maybe because he has little other choice. In 2001, W.K., born Andrew Wilkes-Krier in Stanford, Calif., burst on the scene and relased the best thing to happen to pop-metal since MÃ¶tley CrÃ¼e’s Dr. Feelgood. I Get Wet, W.K.’s debut album, catapulted the relatively unknown songwriter/party starter into the thick of pop culture’s collective unconscious. No doubt, anyone embarking on the road to stardom–for those lucky enough to achieve such a height–marks a strange and interesting journey. However, W.K’s path has seemed downright bizarre.

By 2006, W.K. stood ready to release his third full-length studio album, Close Calls With Brick Walls, but the magic carpet he was riding was practically pulled out from under him. Contract disputes caused the album to be widely released in Asia only with a vinyl-only release in the United States. With his career in limbo, W.K. managed to keep himself busy. He evolved.

“2005 to 2010 was the best of times and worst of times,” he says. “There was more confusion and complication with people I’ve worked with pretty much my whole professional career–personal issues, business issues, contractual issues that made things crazy.”

To add to the insanity, W.K. had to deflect constant accusation about his authenticity. Since the beginning of his career, questions circulated as to whether he was who he said he was or if he was just a corporate construct. Recently, W.K. decided to stop ignoring the controversy and faced it head on, which may have only stirred up more questions. In a September 2008 talk he gave at Madame JoJo’s in London, W.K. revealed secrets about his mysterious past. In something of a confession, he admitted that “Andrew W.K. was created by a large group of people.”

“On the one hand it may be a little scary to admit this to you all, that I may not be exactly who you thought I was, and that the guy who was, in fact, first hired as Andrew W.K. is a different person than the guy sitting here on the stage tonight,” he said (full video of the talk is available at www.rockfeedback.com). “I’m the next person who is playing Andrew W.K.”

Out of that craziness, however, W.K. broadened his horizons. He produced records for other artists such as Lee “Scratch” Perry; hit stages as a motivational speaker; and opened a night club/venue, Santos Party House, in New York City, where he now lives with wife/band mate Cherie Lily. W.K. even ventured into children’s television programming as host of Cartoon Network’s Destroy Build Destroy. Perhaps furthest removed from the high energy music he’s known for, in 2009, he released 55 Cadillac, a harrowing instrumental piano album for Thurston Moore of Sonic Youth’s Ecstatic Peace! label.

“These are all new areas that in 2005, I never thought I’d be able to do, but now I can look back and say everything happens for a reason,” he says. “Those hardships ended up being their own rewards.”

Andrew W.K and his fans were rewarded in March 2010 when Close Calls With Brick Walls saw a proper worldwide release. The mammoth 18-track album was released as a two-disc package with Mother of Mankind, a collection of B-sides, rarities and unreleased tracks.

“A lot of times I never imagined that these songs would be heard by anybody, so it was thrilling, a bit scary–in a good way–to get them out,” he says. “It was also really satisfying.”

With the uneasiness of the past five years behind him, W.K. is back to doing what he does best: rocking the fuck out and igniting fans worldwide with his undeniable enthusiasm. He says a new album is on the horizon for 2011, but in the meantime, you can check him out on this year’s Vans’ Warped Tour.

How is Warped Tour going for you? This isn’t your first time. Do you still enjoy the experience?
I enjoy it more now than ever before. The first time we got to do Warped Tour was in 2002. We did a handful of shows. We were doing Ozzfest that summer, but we were able to duck out and get a little taste of the Warped Tour. We loved it and were able to do the entire tour in 2003. To be invited back to do it again after seven years is a big surprise. I’m really able to appreciate the professionalism and efficiency and the hard work of everyone involved much more than ever before. I think the tour has just gotten better. Every year it improves.

Being gone for seven years, have you noticed the scene change since the last time you were on?
I don’t even know what the scene is other than a bunch of people–really young people, young people of all ages–coming out to enjoy a really memorable summer day with high energy music. As far as a scene or culture that goes beyond that, I don’t know if there is one or how to describe it. It doesn’t seem really appropriate to call it a punk scene, it doesn’t seem really appropriate to call it anything except high energy. It’s enthusiastic about life and friendly and open-minded and passionate vibes.

You have a party tent set up at this year’s Warped Tour…
It’s a big tent that allows me and anyone who wants to go in there to celebrate the day together and create some memories and have some fun. I’m there, my band is there. We’re all hanging out there not only to say thank you to the folks that are coming, but to get those experiences and memories under our own belts. Every day that I play or tour–not just Warped Tour, but in general, going around the world doing entertainment–I meet people all the time who either saw us for the first time at the Warped Tour or first heard about us there or had a friend that saw us there. It’s definitely a powerful opportunity to make an impact and meet people, and that’s what the party tent is all about.

Close Calls With Brick Walls finally got a full release here in the United States and United Kingdom. The album had limited release here and elsewhere in the past, but how did it feel for the album to finally be available in stores to a wider audience?
It just feels like relief on one hand. There’s nothing more that I can do for that record. It’s done. It’s had its time, and now we can move forward. It’s very satisfying now that everyone who’s ever wanted it can now have it more easily. Of course, anyone who’s ever wanted it from when it was first released in Asia could’ve had it by downloading it on the Internet. It just felt good to make an official worldwide version. We love playing the songs from that. It’s great to make sure people are aware that it’s there.

Now that the album is out, does that signify the end of your contract dispute? You’re free to release albums under the Andrew W.K. name again?
The main issues that we had been having have been resolved over the past six months. Over the past year, we’ve been piecing together, reassembling the plans we’d had in place since ’99. It’s not very interesting to me. I would imagine it to be kind of boring stuff. There are a lot of people that it takes to work in show business the way we want to work. I’m grateful for this entire team of people and everything they do. I don’t talk a lot about what we do behind the scenes, but I’m glad it’s all worked out.

There were a lot of allegations made about you, and you seemed to be pretty open with confronting them recently. Are you happy with the way you handled the situation?
I’ve been dealing with certain allegations, rumors and accusations since the first album came out. I’ve tried to handle them many different ways. The stuff that you saw more recently…I’ve tried a different approach to be more upfront. In the past, I ignored things entirely, and that did not help. It made people a lot more paranoid or curious as to why I would ignore these things and pretend they weren’t there. Certainly the approach of acknowledging the questions was a new one, and I think it does work better that way. Sometimes, you think you can ignore an issue and it’ll go away, and this one didn’t. Almost 10 years down the road into my career, it’s never fully been resolved. People will always have questions, so from now on my approach will be to answer them, or at least acknowledge them as best I can.

Do you think the mystery helped you in some way, like, by giving you some sort of rock star mystique?
It could be fun to some people in the audience, but most people seem pretty upset about it. That hasn’t been fun for me either. The people I work with don’t want to be in the limelight. When you’re in show business, everything is on display to a degree, because it’s a show. Most people don’t care about bankers or pharmaceutical company people, because they think those characters are boring–and they usually are. But because show business has this automatic excitement, they assume that everyone working in show business is exciting, but they’re usually not. And they’re usually not interested in being exciting. They’re just interested in the business…

What happened with us was that people began to accuse me of not being–not a real person–but not being who I said I was, or not being the way I said I was, and that’s just not true. That’s been the hardest part for me, the disappointment my fans have had or my friends have had, that feeling of being disillusioned and getting hung up on genuine concerns, but ones that have just been distracting them from the real point of this, which is that this is supposed to be very fun and exciting… I would prefer that it all go away, and that’s why I used to deal with it by ignoring it.

Now that you’re out on the Warped Tour, have you noticed that it’s starting to fade into the background?
Most people don’t know or care about what we’re talking about. A small percentage of people I meet are concerned with this… It can drain a lot of energy from me. I used to be way more stressed out about it, because it felt really bad when someone would say, “You’re a fake,” or “You’re not a real person,” or “You’re a paid actor.” That took a lot of energy away from me too, so now I just try to focus on what really matters with this stuff, and ignore the rest or just let it be on the side.

Are you going to make anything else like 55 Cadillac again?
Someday I’d like to make another instrumental album. That one will always be the way that one is, but the next one is going to be a rock album for sure. That one had a lot to do with the contracts I was in. It came at the right time. It made sense at that time. But thank you for asking about that. I want to make all kinds of albums, you know?