Last Submerge spoke to Josh Carter, one half of Saratoga Springs, N.Y.’s Phantogram, he was making some major moves. Not only was he getting ready to get to work on a new Phantogram full-length, he was also in the process of quitting smoking. Well, as he informed us this time around, the smoking thing didn’t work out so well, but Voices, Phantogram’s major label debut on Republic Records (an arm of the Universal Music Group that’s also home to Florence and the Machine, Crystal Castles and Drake) is due in stores Feb. 18, 2014, and sounds like a worthy, early contender for 2014 year-end lists.

After a few years making serious waves on the indie label circuit, a jump to the majors seemed to be the next logical step for Phantogram; however, Carter admits the process of finding the right new home for the band was a bit “overwhelming.” He says his band was heavily courted by both major and independent labels. (“We met with every major label—literally—and some indies, because we weren’t sure what we wanted to do,” he says.) But Republic won out in the end, because it held the right “vibe.”

“For us, they’re into our talent, and so was every other label, but we really had a good energy with the people at Republic and they really believe in our sound,” he explains. “They just want us to do what we do. We don’t have to compromise anything artistically. We have full creative control, so it’s awesome. We’re the same band as before, just on a new label.”

How much did the change of scenery affect the band? Well, from even a quick listen to Voices, it would appear not all that much. Phantogram remains as dark, diverse and catchy as ever, but if anything, their latest album sounds more complete and expansive. Though different tones and moods are pervasive, songs such as the twisted new wave pop of “The Day You Died,” on which vocalist Sarah Barthel seems poised to be the Debbie Harry for the Twitter generation, sounds right at home next to the dirge-y ballad of the Carter-fronted “Never Going Home.” The album’s first single, “Fall in Love,” sounds as dreamy as its title might suggest but with a throbbing beat that keeps it well-grounded (perhaps even funky).

With the band in pre-production for a string of West Coast dates (with new light show in tow) and an appearance at this year’s South by Southwest on the immediate horizon, Carter took some time away from the business of being a budding rock star to answer some questions about his writing process and how Voices was a true team effort.

You recorded it in Los Angeles?
We did a lot of the recording and demoing in Upstate New York, then we moved everything out to L.A. to record the album, and I co-produced it with a guy named John Hill.

How did you like working with John? What did he bring to the album?
I thought it was great working with him, because he’s had a diverse background in production. He has a very wide palette. He’s done power pop and punk bands, hip-hop acts, straight-up pop acts and also electronica kind of stuff. That was really good for us, because we have a very diverse sound within our sound. I learned a lot of great production techniques from him, and he’s just got a really good sense of rhythm. He takes his time. He’s very contemplative. He and I have very similar personalities—at least that’s what Sarah said—so it was really easy for the two of us to jive with John. He had a lot of great stuff to use, too—analog synths, and every guitar pedal you could think of.

As a producer, how was it working with someone else? Were you hesitant about that?
Sort of, but my whole theory behind art and music is it never hurts to work with other people. You can only learn from other people. Sarah and I are a two-piece band, and we hire live members, but I think having too many cooks in the kitchen is a bad idea, especially for me, because I have a very strong opinion. Luckily, Sarah and I have a very similar vision. Working with John Hill, I think he really read that well. I was very open to working with him.
He didn’t make us do anything that we weren’t vibing on. He would just suggest ideas, and a lot of his ideas were very good.

Do you think there’s a perception that a band changes or has to compromise when it moves from an indie label to a major label?
I think a lot of people look at it in a negative way because they’re ignorant to how it really works. Sure, some artists are molded or feel pressured to change their sound when they sign to a major to maybe appeal to a different audience or something, but when you get the yo-yos talking about how it’s a sell-out move, or it’s bullshit when you sign to a major, they just don’t really know what they’re talking about. It’s the same with people who say you’re a dummy for having your music in a television show or a commercial. They don’t understand how musicians have to make money these days. It’s not the ‘90s anymore.

Last I spoke to you, you told me you were the primary songwriter. Did that hold true on Voices, or did Sarah contribute more this time around?
On Voices, I wrote the majority of the lyrics. Sarah has a much stronger presence on the songwriting for this album. It was a lot more collaborative, and it was a lot of fun. We worked together on most of it, and we really just balance each other out. We trade ideas. Sometimes when I’m working on something, and I get sick of working on it alone or get stuck, I give it to Sarah and have her work on it and we trade back and forth. And vice versa…she’ll do the same thing. She’ll give me an idea, and I’ll start working on that. Sometimes we’ll just get together and play music to a click track until we get ideas that we like.

Did collaborating more take Voices in a direction you didn’t expect?
I don’t know. This record is just a natural maturity of Phantogram. It’s an extension of our sound. There are some differences, but I think Sarah’s voice is a lot more soulful on this record, which is fun to listen to. Overall, it’s just a natural progression of what we do as musicians.

As the primary lyricist, what were some of the things that were inspiring you to write this time around?
Generally, our songs have recurring themes. The songs are just about living and life…and love and sorrow. A lot of our lyrics have a very dark nature. That’s just the path that inspires my lyrical writing at least.

Are you one of those writers who constantly jot down ideas, or does it all come out at once?
It’s funny. I think I have 10 or 12 different journals at my house. It’s hard to organize, because I just sporadically write stuff down in them. Sometimes I just write down something I heard that day and just write down one sentence or one word, even. I’ll think, “What would be a cool name for a song?” So I’ll come up with a name of a song and write it around that.

Do you ever go through your bunch of journals and see a sentence or word that you wrote down and forget why you wrote it down in the first place?
Oh yeah, definitely. That happens a lot. Because I’ve been writing lyrics for 10 years or so, you get a little peek into some feelings that were pretty silly or certain ideas that took me a while to get over before I graduated to other ideas. It’s interesting to read old ideas, but sometimes I can read something that I wrote a long time ago and have this epiphany that I never realized when I’d written it, and I can translate it into something new.

Last time I spoke to you, you were getting ready to work on this full-length and you said to me, “I’ll hunker down and work on something, but we do have a mission statement for the next album.” I asked what it was, but you said it would probably change. Now that Voices is done, were you able to stick to a mission statement for the album and if so, would you be able to share it?
We came up with several mission statements [laughs] and after a while, we were like, “OK, let’s just do what we do,” and that’s what ended up happening. We found it to be too restrictive for our process, so we scrapped the different mission statements that we had. But I would like to work on stuff in the future and practice constraint. I guess our individual songs are kind of like that, instead of the full album adhering to one particular idea. Our albums are very cohesive, but there are a lot of different elements we have in our music.

So was having a singular theme in mind holding you back?
Yeah, I think it was holding me back. It wasn’t natural. It was making me feel like I was thinking too hard about what I was doing. The last thing you want to do as an artist is think too hard about what you’re doing. It should come out freely and flowing.

Check out Phantogram live in Sacramento at Ace of Spades on Feb. 21, 2014. White Sea will also be performing. Tickets are $25 and can be purchased through Aceofspadessac.com. UPDATE: TICKETS ARE SOLD OUT! Look for Voices in your favorite record store on Feb. 18, 2014. 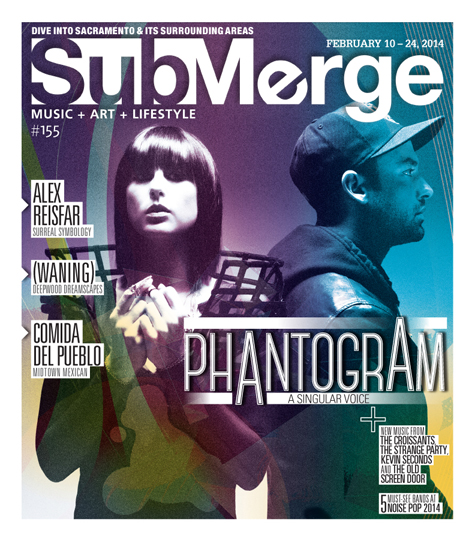