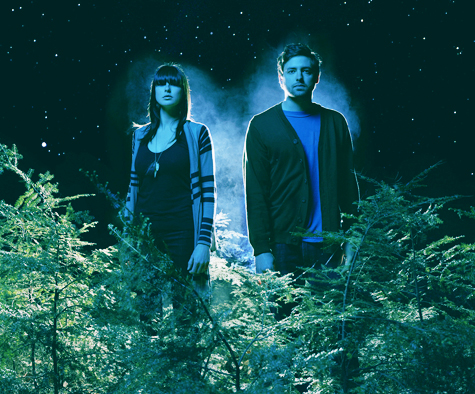 Phantogram Moves in the Right Direction

Formed in 2007, New York’s Phantogram is just starting to hit its stride. The band, based out of the quaint rural town of Saratoga Springs, is the brain child of Sarah Barthel and Josh Carter. The two have been lifelong friends, but just started making music together relatively recently. Just last year, the duo released its debut full-length, Eyelid Movies, on indie label Barsuk, and Phantogram has more or less been hitting the road to promote it ever since. This fall, Carter and Barthel are set to hit the road again on a month-long headlining tour that will coincide with the release of a new “mini album” titled Nightlife.

Carter hasn’t been taking the rigors of being a band on the rise lightly. Submerge’s first attempt to call the band’s songwriter for our interview was left unanswered. As it turned out, the interview occurred a few hours later. An apologetic Carter confided in us that he was out for a run during our scheduled interview time–an effort to “change up my lifestyle a bit,” he said.

“I’ve been smoking a pack a day for about 10 years–of Newports, nonetheless. That’s like the worst cigarette you can smoke,” Carter explained. “I just want to get healthy, you know? I feel like it will be good for my music. I’ve spent a lot of time on the road drinking way too much and drugging and smoking.”

Carter said he started running about two weeks prior to our phone call. Though he hasn’t been able to cut out the cigarettes just yet, he seemed determined to kick the habit.

“I’m on Chantrix, so hopefully I don’t murder anybody,” he said plainly.

Though this is a new regimen for him, he said he thinks it will ultimately not only improve his well being but also improve his potency as a songwriter.

“People have told me they hit this stride–well, it was my dad, actually–they hit this stride where it clears their minds,” Carter said. “That hasn’t happened yet, but I think it’s going to be a good balance for my life and help my creativity.”

He’ll need all the clarity he can get with the band’s upcoming schedule. The most recent headlining tour, which begins Oct. 20 in Millvale, Penn., will take Phantogram through some cities it hasn’t been to before, such as Santa Fe, N.M.; Baton Rouge, La.; and Houston, Texas. Carter said that he’s looking forward to the challenges of winning over new faces.

“I’m curious as to what kind of draw we’ll have or not,” he said. “But it’s fun to hit up new cities, and sometimes it’s pleasantly surprising, and sometimes it’s just what you expect, like, ‘OK, no one’s ever heard of us here,’ but a show is a show. And either way, we enjoy playing.”

The tour comes on the heels of an eight-week stint that wrapped up in mid-August and an appearance at this year’s Bumbershoot in Seattle in early September. On top of that, Carter said he has an “itch to create” that compels him to be “constantly writing music or making beats.” In fact, Carter said he’s already looking forward to getting back to the studio to make another full-length Phantogram album.

Until then, there’s the matter of Nightlife, which Carter told us would be released the first week of the tour. He called it a bit of a departure from Eyelid Movies, though “it points in that direction.” As far as direction goes, it’s difficult to pin down where Phantogram’s moody songs are coming from. Hip-hop beats bump and grind behind Barthel’s dream pop vocals, while guitar lines slither through a forest of lush synths. He elaborated on why Nightlife may have a more of a raw sound than its predecessor and hinted at what direction Phantogram may be headed in the following interview.

I read a recent live review of your band, and the reviewer said that he’d seen you before, but now you really seem to be coming into your own. Do you feel that on stage? You and Sarah have known each other forever, but are you really noticing a stronger bond when you perform live?
I just think that we’re a new band. We’re pretty young. I just think that we’re getting better at it. I don’t know if you’re a musician or an artist or whatnot, but it takes time to really hit your stride and get in your groove with those sort of things. I think we’re getting better and better every day as a band, and it’s been a lot of fun. We’ve hired a drummer, a friend of ours named Tim Oakley, and that makes it a lot of fun live. I really don’t know what to say. Whoever wrote the review could have seen us as a two-piece and then saw us with the live drums and felt that dynamics change or whatever, but it’s all about just kind of doing it a lot.

Why did you decide to add a live drummer to the mix?
We envisioned our sound to be bombastic and loud, but after a while of playing as a two-piece, we got sick of being just a two-piece, looking at each other. I had played in a few bands before, and I’d turn around and there’d be no one behind me. It was a lot of fun as a two-piece, like, juggling around with the beats and sampling, but we just wanted to add more texture, more dynamic to the live show. We thought having a drummer would make it a lot punchier.

I’d seen the video clip of you guys at the Moog headquarters recording “16 Years.” It’s a really cool video, and it must have been a lot of fun getting to play with all that equipment.
We were like kids in a candy shop, you know? Playing with all that cool, analog gear was so much fun, but as much recording and producing that I do, I’m still not a gearhead, per se. It takes me longer to figure out things, and we had limited time, but we had a lot of fun with what we chose to use. We made a pretty cool rendition of that song, I think. Everybody at Moog was super friendly. They sent us a Little Phatty synthesizer too for doing that, which was amazing. I had a blast, and we got to see the factory. It was in the factory, and I had never realized how much of a boutique company it is. They only had 10, 15 people tops working in there, testing out the oscillators by hand. Their equipment is expensive, but you can really see why because there’s so much attention to detail.

How did that come about?
They asked us to be part of their series that they wanted to start. Since they knew we were into synthesizers and thought we would be a cool band to have.

Earlier you mentioned that the new EP is in some way a departure from Eyelid Movies. Why do you think it’s a departure?
It’s definitely in the same vein to a degree, but when I listen to it, I hear a lot of emotion. I hear a lot of emotion in Eyelid Movies too, but it’s raw. It’s a bit more…hmm…I don’t know. I don’t really listen to our music that often. I wish I could compare and contrast, but it’s rawer, and it feels very emotional to me. Maybe it’s just a departure for me because it’s new. I guess we’ll have to wait and hear what other people think.

Was it the subject matter of the songs that make the new release feel more raw?
It’s really dark subject matter when I write our songs. I write a majority of our music and write the lyrics to our music. This year for me and Sarah–I’m not going to elaborate, so don’t bother asking–but it hasn’t been the easiest year on us emotionally. It’s been a great year for us being in a band, but we’ve gone through a lot of ups and downs. The subject matter hits really hard, really close to home for me.

You said you’re really looking forward to doing another full-length next. Have you put any thought into that yet?
Not exactly hunkering down. Just about every night of the week, I’ll hunker down and work on something, but we do at the moment have a mission statement for the next album. But I’m such a flaky person that that could change in a second. I expect the next album to have a lot more separation sonically. I sort of picture things–and both of us do when we write our music–in a visual sense. Right now we’re thinking really stark, high-contrast black and white. But who knows? Maybe we’ll put out this super duper layered, drone-y, shoegaze, hip-hop, whatever-the-fuck psychedelic record. I don’t know.

Could you share that mission statement?
I think we should keep it under wraps, because it could change.

Mystery is better anyway.
We both listen to so much different kinds of music that we’re not influenced by anything in particular. I think after touring with The XX and listening to that new James Blake record, I really like the idea of more separation, and I guess minimalism to a degree.

Phantogram’s headlining tour comes through Sacramento on Nov. 1, 2011 at Harlow’s. Showtime is 8 p.m. and tickets ($15) can be purchased through Harlows.com. Reptar will also be performing.