It Only Takes a Lifetime 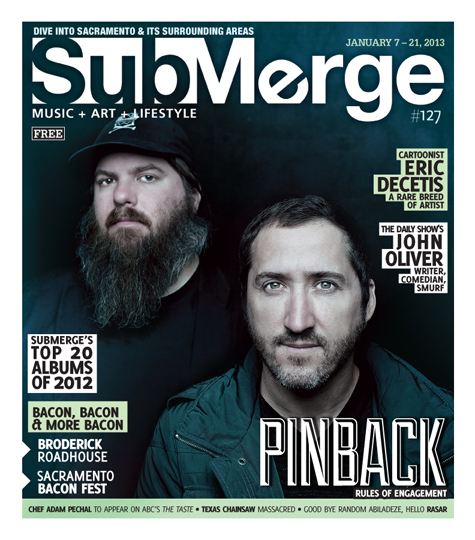 Though Family Life Has Softened Pinback’s Rob Crow, His Drive to Create Has Never Been Stronger

When I was 14, in 1995, the Internet was still in its fetal stage, especially regards to music distribution. Because I lived in a small town in Montana, as soon as the Internet started to become a realistic means of acquiring digital music, I was on board. A friend of mine had told me about a Website called Interjuke.com, which disappeared as fast as it appeared. During the time of its existence, I spent an ungodly amount of time digesting every band on their play list–bands I had never even imagined existed, like Braniac, New Radiant Storm King and early Sublime.

Of all these albums, the one that stood out the most to my friends and I was a band called Heavy Vegetable. The name alone was just weird enough to get my attention. The music had ADD; experimental and bizarre…and I devoured every track.

Now back to the present. The frontman for the aforementioned Heavy Vegetable–Rob Crow, aka Robertdale Rulon “Rob” Crow, Jr–has long since put that band in the past. He now fronts Pinback with Zach Smith, aka Armistead Burwell Smith IV, who is also the leader of the band Three Mile Pilot. Crow’s resume has steadily grown since those early days, working on a wide range of projects such as Thingy (his project that most resembles Heavy Vegetable), Optiganally Yours, The Ladies, Other Men, Goblin Cock and Nervous Cop. However, of all of his projects, by far Pinback has had the largest impact on the current music world.

As a veteran of such a long roster of current and former projects, Crow has learned how to maximize his touring experience. During a phone interview, which I had to conduct twice due to my neglecting to record the first session, we discussed what a Pinback tour is like today. To start, you won’t be seeing Pinback on a house tour anytime soon.

“There was once or twice in the early days when we were supposed to play a house show or house party,” explained Crow. “We would show up and Zach didn’t know it was going to be a house party, and he would be like, ‘I’m going to go sleep in the car,’ and I would end up doing the show by myself.”

However, when Pinback does book their shows at professional venues, they have a couple of simple requests:

“I like there to only be blue or green lights, never red…and no swirly stuff,” Crow says. “Every venue has a light guy, for some reason, and there’s this old adage where the sound guy will set up the lights and walk away while everything goes to hell, and the light guy will stay there while everyone gets blinded and they think they’re at a techno show. The opposite should be the case. We obviously have our own sound guy, but there’s always a light guy that thinks, ‘This is my opportunity to show the world that I can blink stuff on and off really fast.’ It’s not a disco. The whole idea of playing a show is that I like to connect with everyone, I like to be able to see everyone and I like them to be able to see me, or what’s going on, and not to be distracted by a bunch of crazy things.

Listening to Crow’s comments about venues, it’s not hard to see he is growing up. If you go on YouTube, it doesn’t take an extensive search to find old interviews with him, young, generally inebriated and full of piss and vinegar. These days, Crow is still drinking a few beers and having youthful fun, but he is also a devoted husband and proud father. Whenever possible, he would love to have his family with him on tour.

“It’s cool! They get to travel all over the place, and learn about a bunch of different kinds of places,” says Crow. “In the early days me and my wife would be able to take care of them, so at sound check they would be at a park somewhere, and then we would all hang out after and go to the show until they got tired and went to be in the bunk [on the bus]. Then, with the third kid, it seems illogical. With the second kid, he’s only been out once or twice. Once I got my friend to be the nanny for my oldest, because I was going to be out of town on his birthday, and I would never recover emotionally from missing one of my kids’ birthdays.”

How soon might we be seeing his kids on tour themselves as musicians? A lot sooner than you might think.

“For a while [my oldest] had his own Myspace page, back in Myspace times, for his band. He has two songs…they were good. His little brother did a version of ‘The Robots’ [by Kraftwerk] that was pretty cool.”

Crow, however, is cautious about putting too much emphasis on his children entering the realm of musicianship.

“I’m proud of them for whatever they do,” he explains, “but I also don’t want to push them to do anything they don’t want to do; I don’t want to be that guy. However, if they do show an interest, I will be there to facilitate whatever it is as much as I can. I’m afraid there might be too much pressure. The dream would be for me to travel and play with them all the time, but there are going to be days when they aren’t going to want to hang out with daddy.”

Still, he has enjoyed the adventure of fatherhood and partnership with his spouse and looks forward to the travels that still lie ahead. With much more left from Pinback, many albums yet to be released from Thingy, Goblin Cock (and he is still holding out hope for another one from The Ladies…hint, hint Zach Hill), Crow finds a way to balance it all.

“I’m only bummed that it took me so long,” Crow says. “Of course, I had to do it just the right way…I had to make sure that I found the right woman to settle down with, to make sure that she was the perfect person for me–and she is. People just dive into things like marriage and children, and don’t really think about it a lot, it seems, anyway. I never want to have a reason to be divorced. I made sure that my partner was also my best friend…so, that took a lifetime.”