Like a wrecked ship caught halfway in the transition from steel construct to living reef, Pinnacles achieves harmony through clashing processes. They often characterize their music as “prog” or “math” rock, but their work is not overly indulgent in the byzantine excesses of the former or the regimented oblivion of the latter. Instead, they are a varied landscape unto themselves, with tight, earthbound rhythms and sky-borne melodies that rise and fall gracefully like birds of prey pulled aloft by thermal gusts.

Indeed, one has a hard time listening to songs like “Sinking vs. Sourcing,” a highlight off of their last album Convolve and Reflect, without imagining a soaring birds-eye view of dramatic, forested mountains. It is only after a few listens that the second side of Pinnacles—one of intricate, carefully designed technical wizardry and layered production, becomes readily evident.

This background machinery is mostly the realm of the band’s two guitarists/vocalists, Justin Hunt and Robbie Landsburg. After an intense collaborative songwriting and recording process with bassist Jesse Kinseth and drummer Zach Peach, who both weave a maze of mutating (but surprisingly naturalistic) time signatures, the former two can spend months fine-tuning the results, capitalizing on their introverted natures and retreating to a world-within-a-world where endless experimentation for its own sake eventually crystallizes into a record. One gets the sense that they could continue indefinitely—and their shifting, engrossing songs reflect this, almost striving to expand ever outward, refusing to be fully contained by the boundaries of an album. This is the environment from which Convolve and Reflect emerges.

The environment from which Pinnacles emerged about two years back is likewise fertile, in more ways than one. The Nevada City/Grass Valley area, where the band members grew up, has long been a hotbed for creativity, especially in music. The band members cite a supportive local scene, along with the solitude afforded by the lack of sprawl and proximity of the nearby forest, as producing favorable conditions for their exploration into the boundaries of melodic art rock.

At times aggressive or purposefully delicate, precisely arranged or freely drifting, Pinnacles are now at the top of their game and have only bigger and brighter things ahead. While gearing up for an extensive regional tour and considering how they might diverge stylistically in the future, Hunt and Landsburg were able to chat and lend more insight on their genre-bending nature, the unique locale they hail from and the virtues of having countless guitar pedals. 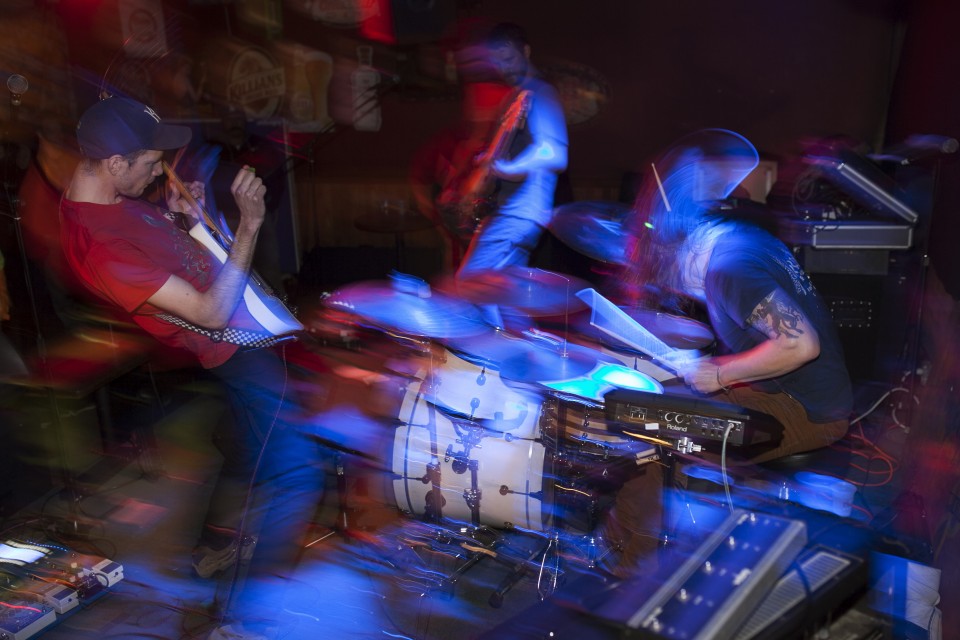 Does the name “Pinnacles”  refer to anything in particular?
Justin Hunt: There was actually a long list of potential names that we were crossing off a wall, and “Pinnacles” ended up being the one least offensive for all of us. I’ve always liked the way the name sounded, the imagery that it conjures, just as a knee-jerk reaction.
Robbie Landsburg: Also, there’s a lot of builds in our music, a lot of high points—that’s sort of a connection, there.
JH: Hmm … I never thought about that [laughs].

What about the latest album title, Convolve and Reflect?
JH: That one wasn’t quite as arbitrary—there’s something very onomatopoetic about those two words together. Convolution and reflection are terms used to describe reverberation, or reverb. There’s the reverb that we were using on the record and in our recording spaces. If there was a theme to the record, though, it would be empathy or the lack thereof these days—people not being emotionally connected to each other, just kind of broad-stroke themes like that. So convolving and reflecting is kind of about people coming together, bouncing off one another and existing in the same space. It was a very loose idea that I liked.
RL: Our previous album, Automaton—that name was a reference to automation, which is also something you use when you’re in the studio. Our band is like a merge of digital and analog worlds. On the vocals sometimes we’ll have weird, harmonizer effects that are kind of robotic, blended with natural acoustic instruments. There’s a mixing of the digital and analog, as well as the emotional and emotionless.

Are your natural surroundings a big influence on your music?
JH: I’d say yes, but mostly subconsciously. It’s a beautiful place—there’s not nearly as many distractions as in a big city.
RL: For me, living in this small town in the foothills, surrounded by nature, and yet I’ve always been a very computer-oriented person as well, I appreciate the outdoors just as much as I appreciate nerding out on computers. There’s always that duality, and it’s something I’ve always been fascinated by.

Was there a particular style or sound you hand in mind for this project from the beginning, and is it the same as what it is today?
JH: I don’t know if we had any particular ideas, to be honest. I don’t know if there were any preconceived notions of what we wanted it to be, which is part of the fun, at least for me.
RL: Yeah, totally. I think we all played to our strengths, like I do a lot of guitar tapping, and then Justin tends to write in some really weird time signatures—it’s never really in 7, never really in 9, it’s shifting throughout. And Zach, our drummer was in a really prog-y band before this, and he’s a really straight-ahead rock drummer that can also do some really cool stuff in odd time signatures. We each play to our own strengths, and I think we kind of took that as far as we could with that last album. I’ve been talking about branching out and getting a little less rock ‘n’ roll and guitars on our next endeavor. I think Convolve and Reflect is our “mastery” of what we initially started with.

Were you always a fan of progressive/math/post rock? When did you first discover these genres?
JH: I don’t know. I’d say I’ve become more of a fan of that kind of music of late, but I don’t know how much it informs the songwriting process of our band. I didn’t grow up listening to a lot of traditional “prog” bands of the ‘70s like Yes and Rush, but I knew those bands, and I liked them. The genre wasn’t something that was terribly influential for me, as a guitar player or songwriter. The weird, odd meters is just something that happens naturally, more just what comes out when we get in a room and start messing around. And after a while, it feeds on itself and becomes what we do regularly.
RL: Justin and I are both huge fans of the guitar and drum sound on Siamese Dream [by Smashing Pumpkins]. Our bassist Jesse is a huge Tool fan, and I think we’re all huge Tool fans, Aenima and Lateralus were influential as we were growing up.
JH: I think the idea is to use odd time signatures, but not make them sound incredibly complicated. Maybe because we’re all neurotic and want to keep it interesting for us, but at the same time, we don’t want to sound too pretentious.

The influences you mentioned seem to all have special attention to loud/quiet, heavy/delicate dynamics.
JH: I think, at least Robbie and I, we’re huge fans of a lot of ‘90s rock music, which did that extremely well—especially that Tool/Smashing Pumpkins kind of flavor. I started playing guitar in that era, and there’s a lot of that dynamic in the music from that time. Another thing that was influential on me was the prettier soundscapes and then heavier sections, trying to blend those together.
RL: I love every type of music out there, but it can get kind of tiresome in a band doing nothing but heavy or quiet stuff exclusively. It sort of desensitizes you as a listener. I like to keep a contrast, keep the listener on their toes and also present a journey or cinematic experience.
JH: Also, we get to play with more pedals! The more sounds we mess with, the more pedals we get to justify buying.

Speaking of messing with sound, you’re both credited as producers on your last two releases. What is your approach to production?
JH: Just as a financial decision, we’ve always valued the DIY aesthetic in this band, and it has become something that defines us. When we set out to make our first record we just wanted to do a demo on a lark, and it sounded reasonably good, so we decided to do everything else by ourselves as well. To do things on your own as a band—for one, it’s a lot cheaper. It’s a small investment of money and a large investment of time. I like keeping things under our control. A lot of it was Robbie and I just sitting in there, tweaking the music bit by bit.
RL: If this record had been made in the ‘90s, on a studio budget, it would have been like $500,000. The amount of time we spent on it, just going down the rabbit hole, exploring options, coming up with harmonies, we completely re-amped all our guitars, sending it through the interface of our computer, and through the pedals, and back out of the amps—that way, we could do live pedal performances with our hands instead of stomping on them. Just going down the rabbit hole of soundscapes and ambiances, and not always to a tasteful effects either [both laugh].

What’s your take on Nevada City’s unusually rich music scene as a small town?
JH: Yeah, there’s a disproportionate amount of talent that comes out of here, considering its size. My take is that, there was an era where there was a lot of hippies who left the cities and moved up here to raise their families, and those same hippies became parents who really fostered the arts with their children. Thinking about that question, that’s the best answer I can come up with. It’s a peaceful, quiet community, with a lot of parents who are very supportive of their children who have become this generation of musicians who at least had opportunities to flourish.
RL: And I think there’s a compounding effect as well, when you see other people who are a bit older than you who are performing, and you know some of them, or their siblings, it makes it seem that much more attainable to attempt it yourself.

Pinnacles kick off their West Coast tour March 17, 2016 in Grass Valley at Center for the Arts’ Off Center Stage. On March 23 they’ll play The Press Club in Sacramento. To listen to and/or purchase Pinnacles’ latest album Convolve and Reflect, go to Pinnacles.bandcamp.com. Trust us, you’ll be glad you did.