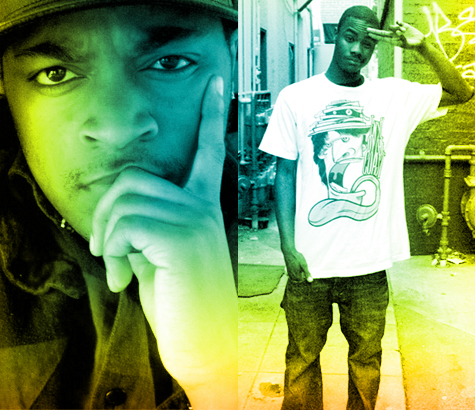 With the recent death of legendary MC Guru of Gang Starr, nostalgia is running strong in hip-hop for the golden era sound. Gang Starr’s simplistic formula of Guru lending his commanding voice only to DJ Premier’s gritty boom bap production was a staple of an era that would be followed by meandering albums with a gang of producers tugging the sound in all directions.

So it goes, with every death there is a birth. Local rapper Chuuwee wasn’t born yesterday, but he was barely an infant when Gang Starr’s Step Into the Arena first hit the streets. Out to get a rep, Chuuwee is only 19, but his mind is old. Case in point: I never expected the first influence he mentioned to be Big L, another late great-just like I never expected Chuuwee to be underage when I inadvertently invited him to meet me at a pub. “Am I allowed in here?” he asked sheepishly, but I shrugged it off and guided the kid to the beer garden-he looks old enough.

On “6 Feet Deep,” a track Chuuwee played for me, he harks back to the Nas lyric, “I keep falling, but never falling 6 feet deep,” like he grew up on Illmatic. With the right influences in place, Chuuwee just needed his Premier, his Large Professor, hell, even his DJ Jazzy Jeff, to provide the proper backdrop to his voice. He found his complement in Lee Bannon, who is three years his elder. “There’s been duos throughout time and usually the producer is older,” Bannon said. “I look at it like we’re part of that tradition-the classic way of doing it.”

Bannon is neither a household name, nor a certified buzz name on the streets or blogs. Such credentials are inconsequential since it’s only a matter of time until the honors are added to his rÃ©sumÃ©. Bannon has lent his sound to Inspectah Deck of the Wu-Tang Clan, Talib Kweli, the Bay Area’s The Jacka and Los Angeles’ U-N-I. He has also produced numerous solo instrumental records. Like most producers, his sound can carry further than the name. Too often we appreciate the voice, but neglect to look to the maestro assisting the voice. As we continued to listen to music, Bannon would name drop producers like DJ Muggs and Madlib as styles he aimed to mimic.

Typically, when a producer does this, I nod politely, but consider the comparisons a stretch. But, as Bannon played beats to an upcoming project, it actually had DJ Muggs qualities, like an off-kilter bounce and the sharp chop of cacophonic samples.

The two met by chance at a local beat battle. Bannon took the initiative, reaching out to Chuuwee before the battle and giving him a beat to perform over. Initially, Chuuwee wanted a single beat from Bannon, but Bannon challenged the young pup to write a record. “I got a call from him unexpectedly,” Chuuwee said. “We started kicking it at a homegirl’s house and he got inspired by a pizza box. It all started falling into place from there.” Titled Hot ‘n’ Ready, the collaborative album has taken a wildly creative turn with a unique limited run in packaging. Forty pizza boxes filled with T-shirts designed by 12ftdwende, stickers and the CD will be available at urban boutiques like Havoc and United State, as well as other Midtown/downtown locations. “It will be a scavenger hunt-type thing,” he said. “If you seriously want the project in the collector’s box, you have to search for it. It’s a really cool idea. I ain’t never had nothing like that before, so I’m pretty excited about it.”

Bannon’s creative marketing strategy, matched with Chuuwee’s infatuation with concocting well thought out projects (a sensitivity sparked by his Obsessive Compulsive Disorder), make Hot ‘n’ Ready a unique project. The marketability of CDs is a dying art with the shift to digital formats. Bannon intends to intrigue new and old fans alike by presenting his music as a collector’s item before it’s even out of print and up for high-dollar auctions. “I’m trying to push the envelope with every project I go into concept-wise,” he said.

The pizza theme is not limited to the packaging, as Chuuwee said the concept loosely runs through the album, as evidenced by the closing track, “Last Slice.” “I wrote it in three-and-a-half weeks,” he said. “I don’t want it to seem like I rushed it. I’ve got extreme OCD, so my projects are always overly thought out. I only wrote it fast because [Bannon’s] beats were so inspiring. It just flows out.”

Chuuwee said he’s been stuck in the ‘90s since he started rapping. For the project, he requested that Bannon cater the beats to that style. “I’ve heard his first mixtape and it had a huge range,” Bannon said. “He did stuff over Neptunes, Dr. Dre and Common beats. It was a big spectrum of taste, so I knew I couldn’t make it all ‘90s boom bap, but a lot of it is that style.”

Bannon is more than a producer when it comes to conducting his business. A PR team is hardly necessary. His inspired approach with Chuuwee is just one of many projects with intricately thought out publicity plans. He is in talks of possibly having unplugged Chuuwee sets at local pizza parlors-although it’s a mystery as to how hip-hop can go unplugged. “What’s the biggest thing you’ve seen come out of Sacramento in the last five years?” Bannon asked, to which I could only reply Brother Lynch Hung. “It’s been a minute, and I think we can get into the masses like that. With his talent and my resources, I’m hoping to duplicate the past success I’ve had except through his words, instead of just my production.”