The Pieces Fit: With a new EP on the horizon, everything seems to be falling into place for PointDexter 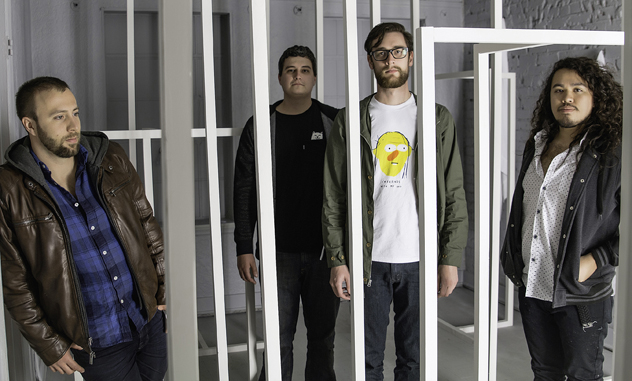 When it comes to bands, the longer you’ve been together as a group, the probability of keeping the same lineup intact diminishes on a show-to-show basis. Breaking up is hard enough to avoid as it is, but when it comes to members’ personal lives and ambitions, it’s nearly impossible to maintain continuity and avoid some shakeups.

For Sacramento four-piece PointDexter, the story is all too familiar. The fact they are an entity nine years after forming in 2007 is a testament to the passion and stubborn one-foot-in-front-of-the-other attitude of frontman and founder Kevin Kinsella, as well as the continued musical appeal to the band’s loyal fan base.

Sitting down with the current lineup—lead vocalist/keyboardist/saxophone player extraordinaire Kinsella, guitar player Brian Wood, bass player Jarom Horner and percussionist Paul Bates—you get the impression that they feel they are now, above previous incarnations, at their very strongest. The current members joined the ranks through different means: Bates was actually the second drummer for the band and had left to attend school; however, he and Kinsella had kept in touch and was able to talk him into a return to the ranks, while both Horner and Bates are recent additions.

“I joined the band back in 2013 … PointDexter was looking for a new bass player,” said Horner. “Kevin hit me up and two weeks later I was in the band playing a show at The Powerhouse. I felt like I brought a different element with my six-string bass, with its extended range, and the band starting taking a different direction. We started doing more improvised jamming—I come from a jazz background—so we switched things up.”

“When Jarom came in the band, it just fit,” added Kinsella. “Actually, everyone in the band right now, it’s just really easy to be together. Although we’ve had lineup changes over the years, I feel like this is probably the strongest lineup that we’ve had, just because we all enjoy being around each other. Not that we didn’t before, but … it’s very easy going, you know? It’s not hard to relax and be around each other.”

Wood is the most recent addition to the band, following the departure of former guitarist David Albertson. As with Horner, he feels as if his own contribution brings the band’s sound to a new level.

“It’s like reading a good book: everyone has their own interpretation,” says Wood. “The guys have given me a lot of freedom to just go and write my own interpretation and spin on something that I think would fit really well with the band musically. Ergonomically I think everything is falling into place similar to Tetris. You know, a great game of Tetris, everything just falls straight in, and so it’s been really exciting.”

Currently, the band is set to release a new EP. Previously the band has released two full-length albums—the first, Neoanomaly, was released in 2010 and the second, On the Surface, in 2012. The band took a different approach to the recording and release process this time around, choosing to go the EP route, and instead of a simple release party and issuing copies of the album, they’re dropping videos for each song on the album, essentially putting them out as individual singles separately and then releasing the group as a collection.

“We took it as a model of how the industry is nowadays,” explained Kinsella. “The industry is built on singles, and we’ve released full albums before, and the radio and the scene will pay attention to a few songs, and then it disappears, but the way that we strategically released everything, and did videos, we’re able to get attention to all the songs and in detail.”

Over the years, the group has worked together with a number of engineers on their recordings. From Kurt Shearer and Craig Long (of Cake fame), to Grammy award-winning engineer Francis Buckley, as well as locals Jay Trammell and Sean Stack. For this latest recording—entitled Rocket Surgery—the quartet turned back to Stack, who has become their go-to guy when it comes to the studio process.

“Working with Jay [Trammell] was definitely a learning experience,” said Kinsella. “He was probably one of the first [engineers] that we worked with. He taught us how to write to an audience, and how to be a little bit more commercial in our sound. He would teach us what he was doing with the recording, how he was affecting the frequencies … he was very open with us. He was starting to get expensive, and Sean [Stack] was his protégé, so we went to Sean after a while, and Sean is a little more artistic in the way that he allows you to record. He’s not very formulaic. He’s really open. You can tell he has a passion in what he does. Pretty much whenever we record, we always have Sean mix and master.”

The band has already released videos for “Freak Show” and “Blood to Black” from Rocket Surgery, both directed by local hip-hop/R&B artist Jae Synth. A video for their current single, “Even Up the Score” is in the planning stages. The band explained how the new video will likely be a follow up to the chaotic events depicted in the “Blood to Black” video, in which a female actress kills most of the members of the band. As they have gone through a bit of a lineup change since this last video, “Even Up the Score” will likely bring back a couple of the members back from the dead, while introducing their newest member, guitarist Wood.

As mentioned, the group really feels confident that they have finally found the lineup that brings their sound to the highest level. Kinsella and company feel that the years of experience, along with the specific talents and styles each member brings to the table have finally allowed their sound to reach its potential. With this new album in place, the time couldn’t be better for reaching their potential.

“I feel like we’ve evolved to a point where we’re able to deliver the exact sound that we want,” said Kinsella. “When we go to write a song, we have the influences that we want to portray in mind, and because we have the experience behind our belt, because we’ve known each other for so long, because we’ve mastered our instruments, it’s gotten to that level where we can deliver that with a greater ease. I remember when we were first starting, you start out trying to write a song, and you don’t know exactly how it’s going to sound in the end. Now it’s like, when we play a song, there might be a couple of surprises, but when we have it in the back of our heads ‘I know how I want this entire song to sound,’ it comes out that way.”

Help PointDexter celebrate the release of their new EP Rocket Surgery at Pour House in Sacramento (1910 Q Street) on Feb. 20, 2016. For more info, go to Pourhousesacramento.com or to learn more about the band, go to Facebook.com/pointdextermusic.