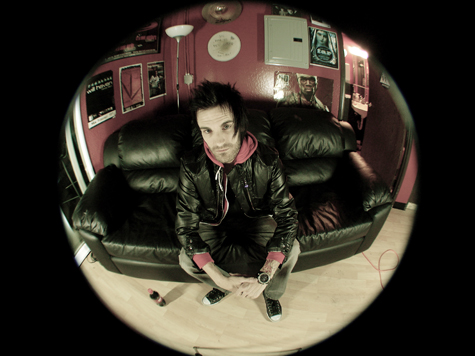 Zac Diebels (aka Z Rokk) is no stranger to the studio. The Sacramento local has been around the block, musically speaking. He’s done the major label thing with his old band, Simon Says. The group was signed with Hollywood Records through the late ‘90s and early ‘00s. He even contributed songs to major studio films (such as Varsity Blues). But when that band dissolved in 2002, he took another route, studying political science at Sacramento State, and even got accepted to the McGeorge Law School before he rediscovered his love for music with his current outfit, Automatic Static (not to mention his own “School of Rock,” Rock Inc.), which is ready to release a new EP, Friends & Lovers, on May 24, 2011.

Produced and performed almost entirely by Diebels at Rock Inc. Studios (Matt Franks played bass on the EP), the songwriter shows his deftness behind the boards without sacrificing punching power. Only six-songs deep, Friends & Lovers makes a double album’s worth of noise. It has the feel and energy of mid-‘90s alternative rock, but doesn’t sound nearly as sloppy. There’s purpose and intent in the recording, a calculated, yet wild attack.

The huge riffs and slurred howls of the opening song, “Clique Master,” should be enough to instantly hook fans of aggressive hard rock music, but it’s the EP’s second track that cements Friends & Lovers as worthy of a deeper listen. “Drag Me Down,” is a blaring, seven-minute nÃ¼-grunge epic, rife with furious feedback and a vocal delivery to match. Shimmering, tremolo-picked guitar distortion unfolds into a thumping chorus featuring a caterwauling Diebels, firing spit-soaked lyrics. The title track is more radio-friendly, though it opens with some of the second track’s residual feedback. On “Friends & Lovers,” a sinewy, rumbling bass line snakes through the otherwise sparse verses, giving way to the sort of explosive chorus that defined an entire generation of rock music–from Nirvana to Deftones. Diebels does well to nod to the bands that no doubt have influenced him without coming off as overly pandering or downright thieving.

Diebels does veer off path with “Pedal Down” and “Your Name is Not My Name,” with some mixed results. The former offers a nice break from the full-throttle rock of the four preceding tracks before surging into an unduly posturing chorus and somewhat bluesy bridge. The latter has a frenetic pulse and even nicely incorporates some elements of electronic music, for some added flavor.

Friends & Lovers certainly has a radio-ready sound, but it’s not encased in much of the plastic gloss that’s lacquered on most of the hard rock that’s permeating the airwaves. There’s a growl and snarl here that’s been sorely lacking for some time, an immediacy that’s become lost in the tweaking and polishing of every note to artificial and somewhat antiseptic perfection. It’s nice to hear something that sounds like it was actually made by a person again and not a team of engineers, songwriters and studio scientists. And it doesn’t hurt at all that it rocks so righteously.