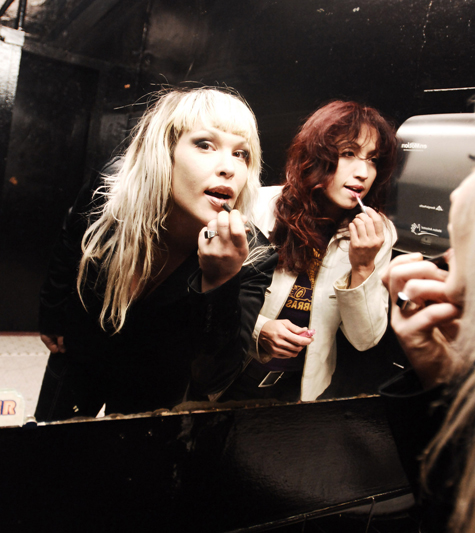 The Detroit Cobras Scour the Archives and Revitalize Long-Lost Hits

The Detroit Cobras are good at what they do. So good, they kept the critical media scratching their collective temple as to why the band struck a familiar chord, but the origins were not quite traceable. Four albums and a gang of singles deep, the Cobras’ garage and R&B nostalgia earned them the company of their most-beloved songwriters and a friendship with a particularly notable Grammy Award-winning, Detroit-raised producer.

It is old hat to fuss with clever ways of calling the Cobras a cover band. The Detroit Cobras are a cover band. Don’t let them tell it with a fine slant. The good news is, they’re a band with exceptional taste rooted in the vaults of lesser known Ronettes, Irma Thomas and Otis Redding hits. Guitarist Maribel Ramirez sums it up with, “To me it’s not important whether you write or you don’t write, it’s that you come up with great songs.” The Cobras are far too rad to play your cul-de-sac soirÃ©e, Fire Department barbecue fundraiser or wedding reception. It leaves the covers of Fleetwood Mac’s “Don’t Stop” to the animatronic band in Chucky Cheese restaurants.

“We’ve never reported ourselves to be a cover band. It’s not like we’re doing Motown review and I’m coming out with my hair in a beehive doing Supremes songs,” lead singer Rachel Nagy said. “Once one critic found out, other critics started raving, but we never said we wrote them. It’s not a hidden issue.”

It’s been four years since Tried & True, making my first inquiry quite obvious–what’s the haps on a new record? Turns out, the Cobras are waiting on fellow Detroit native Don Was, a man whose production is well worth the delay. If the name is not ringing a bell, perhaps these will: Lyle Lovett, Iggy Pop, Elton John, Bob Dylan, Bonnie Raitt, Garth Brooks and The Rolling Stones.

“The whole Don Was thing is kind of nebulous right now. He’s a very busy man.” Nagy said. “We’re talking about maybe mid- to end of summer to start recording. We may even do it backwards now that all the hip kids are putting out singles. Just start putting stuff out as we record it.”

While the Cobras wait for Mr. Was to grace them with his time and expertise, we took to discussing the meat and potatoes of the Cobras’ next step in being the best darned (cover) band around. With the cat out of the bag and old songwriters coming forward at their shows, it’s an exciting new time for the band, in which perhaps an original or two might sneak into the tracklisting.

It’s been a while since the last Detroit Cobras record. What’s the motivation going into the new record?
Maribel Ramirez: Being able to record a little better. We make decent records, but we’d like to take it a little further than we already have–make it more powerful. We’ve done a decent job by ourselves. In talking to Don [Was], it’s something we both want to do.

Will there be a shift in the bands that influence the music?
MR: It’s digging deeper. It’s almost attitude-wise, you know what I mean. We’re a little more grown up and we still want to make a dance record, but dance by our definition.
Rachel Nagy: Was said to us, “Look, I won’t do this if I don’t know what to do. If I don’t understand this and don’t know what I can bring to you guys, I won’t try to fake through it or turn you into something you’re not.” And that’s what we needed to hear.

Does the band feel pressure of possible misrepresentation, considering the songwriting process is built upon previous works? Do you ever get approached by disgruntled fans or the original songwriters?
MR: You’d think we would have, but to tell you the truth, most people don’t know the records. People aren’t really going to come up to you and tell you negative things anyway. When we cover a song people go looking for it. Most don’t say, “Hey, I know that.” When we were in Europe, it was cool to see the effects of having done this. People come out and say, “Let me show you what I’ve got.”

In Los Angeles a person came to the side of the stage and said, “There’s a person here who says you covered one of their songs.” I remember thinking, “I thought most of them were dead?’ Who the fuck is standing at the door.” It was Jackie DeShannon [one of the first female singer/songwriters in rock ‘n’ roll]. We went to a little studio and wrote a couple of songs with her. One of the songs we wrote during that session I want to use on the next record. I at least want to give it a shot.

Have you ever had someone try to pull the wool over you and pretend to be related to one of the deceased musicians to get paid in some form?
RN: The closest thing that ever happened to that was Mickey Lee Lane’s brother. I don’t think we met him, but I think he sent us a letter. It was cool, but then died. The next thing you know we’re getting these long e-mails from his brother. He started on the whole, “Yeah, I actually wrote that and here’s some other stuff I wrote that I’d love if you guys would do.” It was very obvious that he hadn’t written anything.

The other music he was sending us was terrible. It was really bizarre shit like I don’t think we’ll be doing a dance remix of the blues anytime soon. Other than that, we’ve never really had anyone try and play us.

Considering many of these songs are obscure hits that are either out of print or impossible to find, has there ever been an interest to do more for the originals beyond the band’s interpretations of them? For example, a label that focuses on reissues or a compilation?
RN: We absolutely have the utmost respect, it’s one of the reasons we do what we do. But this is our personal jukebox. We get together, share each other’s weird records, drink some beer and play the songs we love and find fun. Other than that it was not supposed to be anything deeper.

I wouldn’t really call us collectors. I’ve lost so many records. It comes down to the difference between boys and girls. The girls run around, dance and have a good time, while the boys are the librarians discussing who begat who.

We’ll leave all the reissuing to those boys that are great at cataloging and remembering and not losing their records and not moving from a house and forgetting two boxes in the attic.

Detroit Cobras will perform The Blue Lamp on Thursday, June 9, 2011 at 9 p.m. Also appearing will be Girl in a Coma. Tickets are $12 in advance and can be purchased at Eventbrite.com.