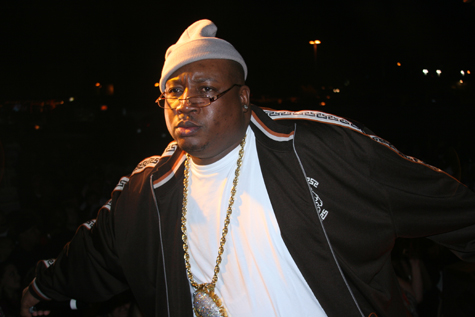 E-40 on the Changing Tides and Staying on Top

I’m not a trained journalist so all the rules of being unbiased are out the window over here. Pound for pound, album to album there isn’t an MC who can match E-40. For a musician of any genre to stay relevant through 11 albums is an accomplishment on its own, but to remain creative and continue to innovate for that many moons is (and to quote the man) as “rare as white running backs.” He’ll even tell you he’s years beyond the rap pack, and the crazy part is he’s slowed down the flow with hopes that everyone else will catch up.

Off Warner Brothers after two albums, 40 is back to work and enjoying the freedom of not having to be forced into a square FM hole, vowing to return as the mobbed out slang spitter for a whole album with Revenue Retrieving this November. Yes, you read that correctly: new album coming in a few months, don’t forget where you read it first! In the meantime, 40 is staying on the road, sliding through Orangevale on Aug. 15, 2009 for a show at the Boardwalk. Getting him on the phone is nearly impossible, but as he does with his live performances he puts it all out on the table when he does surface. You’d be hard-pressed to find a more well-rounded rapper”¦and his interviews are hotter.

Alright, I want to talk about your latest album, The Ball Street Journal. Do you feel the album got a fair chance?
Nah, it didn’t. I was with Warner Brothers”¦ They did a good job a couple years before that when Lil Jon was in the loop, but what happened was they got to this point”¦ You gotta understand, I’ve had some radio play, but not always. In my earlier days, even when I signed with Jive in 1994, I had gotten a little radio play but not as much as I could have because of lot of my songs were so soil radio was scared of it. I’ve always been an underdog, and all the odds have been against me for years. With Warner though, I think they meant well, but they were looking for a big blowout hit. That is something that’s rare. It’s not that easy to come up with a hit. The song that you think might be that one, everybody might not think it’s the one. Then the one you think ain’t the one, ends up being the one for everybody else. It’s a catch 22. You roll the dice in the studio. But nah, I didn’t think the album got a fair chance, because Warner Brothers wasn’t in synch. It just didn’t work. They were trying to get me to do nothing but radio songs. I had to argue for the hood songs that I had on there! That’s the past, though. I’m on Revenue Retrieving right now. But The Ball Street Journal was a slappin’ album, and it still is!

I’m saying. I talk to folks and they didn’t even give it a chance, but if you listen to the album as a whole it’s classic 40.
It really is. A lot of shit like “Tell It Like It Is,” I tell it like it is. That’s one of the realest songs in like the past 10 years. It’s not toward nobody—if the shoe fits wear it—but a lot of people are feeling the way I feel. But you know, people don’t want to hear real songs. They don’t want to hear stuff that goes right to the point and tells the real. There is so much game involved in every line that I say that each line can be a title. I promise. Go back and listen to it, there is so much game and punchlines. It’s gonna end up being one of those songs in the future people will be like this dude was way ahead of his time. They’ll be like whoever this was rapping was retarded, you smell me? In a good way [laughs]!

Yeah, I meanÃ‚Â  “Tell It Like It Is” for all the game, but the one that bugs me out on a creative level with the wordplay and whole concept is “40 Water.” People don’t make songs and flip shit lyrically like that anymore.
Yup, they don’t, man. That’s what I’m saying. All that stuff, they don’t get like that anymore. It’s gotta be all dance. They want it to be all dance. It’s a trip. What it is though, like, who wouldn’t want to put Akon on their album? Especially at that time. And you know, I’ve been at this for 20 years, so OK, let me roll the dice and try some different stuff. The “Wake It Up” record was a good record, but my fanbase”¦ Fanbases can be stubborn. They don’t want me to do a song like that. They would accept it from anybody else, but they didn’t want me to expand and go beyond what I’ve been doing, and that’s keeping it all the way mobbed out. And even my fanbase turned its back on mob music, which is the heavy basslines and the certain sound we were rolling with in the ’90s. My fanbase, being the Bay Area,Ã‚Â  started buying up Southern music. They turned their back on the sound that we were doing, so I had to readjust and do whatever I had to do as far as music and adjust, but not go too far out of my jurisdiction. Do just enough to get by and for my fanbase to accept me. Basically, it’s a tricky a game. It’s either turn with the times, or the times will turn on you. A lot of times, the way hip-hop is, and I’m not griping, but I just feel like I’m way way way ahead of my time. I know people think I’m wack. Like a lot of cats on the East Coast think I’m wack, and the reason is because you can’t comprehend what you don’t know. And if you don’t know, how can you comprehend it? You know what I mean? It goes over their heads like a flying saucer. Then, a lot of cats don’t have the patience to look at creative rappers. They want you to rap a certain way, because that’s the only way they know it. They want you to rap like all the other rappers, and I’m not going to do that. I want to be in a class by myself. It’s fucked up that I have to readjust or downplay my skills to adjust to today’s listeners. You smell me? It ain’t cool. On this upcoming album, though, I’m free. I can do what I want. I can just be me and if a motherfucker don’t like it, they don’t gotta buy it. I’m gonna be the E-40 from the beginning. Mr. Flamboyant.

To switch things up you come from the era where MCing was about being unique and going out there to be the best rapper. Is there a point you reach where you kinda give up trying to prove that you are the best?
I feel like there isn’t a best rapper in the world. Everyone has their own category, and styles, and way they spit it. You’ve got backpackers, cats that just spit gangsta rap, cats that spit straight dope game shit, cats that have mastered radio. As far as being the best game spitter of all time, me personally, and I’m sure there are a lot that do agree some might not, but I have to give that title to E-40. As far as being one of the most unique rappers, I’m definitely one of the most if not the most. And I’ve got one of the most distinctive voices in rap. But I don’t care who the best is. When I was younger I did, because that’s all you want to be, the best, but there are different opinions out there. The people who they say are the best, I can’t agree with them. I have my top 5, but I know it ain’t the ones they’re saying. People roll with what the majority says.

You mentioned the ’90s stuff. I’ve been going back and revisiting albums like The Element of Surprise and Charlie Hustle, and stylistically you were on a whole other level with those two albums. Where were you at mentally and artistically at the time when you were recording those albums?
Music was changing at that time. People didn’t want to hear that. The industry was on some other shit. They were leaning toward the South, and the West Coast wasn’t hot. And even when we were, we had a few people that were selfish saying Los Angeles is the West Coast and that’s all it’s gonna be. They left the bologna for the Bay Area, so we were out here going through it. I just held on like a hubcap in the fast lane and said I’m gonna do what I do.

I don’t know, on those two albums you seemed to be in another place style-wise. And then after that in like 2000 with Loyalty and Betrayal you kinda went back to a more controlled flow.
I had to. Now you see where I’m at with it. The game is goofy. The goofy ears”¦ music changed. Music started getting watered down and dumbed down, and now they want that shit back. I figured if I would have kept doing it, shit, I probably still wouldn’t be on right now. I had to hold on like that hubcap. It’s like, if I didn’t do it, adjust to the ears and slow down my flow, I probably wouldn’t still be able to eat right now. I wouldn’t have had a Gold album two years ago at 39 years old. I wouldn’t have sold a million ringtones. It’s a trip ain’t it?

I do believe that things come around. And like you said, you’re getting back to it so I think it’s that time.
It is that time. I see exactly where you’re at with it. Trust me. I look at all angles.

Last question, I know you’re a big Rossi drinker to this day, especially the Burgundy. Why the Burgundy over any of the other kinds?
I’ll put it this way, when I was a little young moustache—and I’m not going to say what age—I would sneak into my mom’s little Rossi wine sitting on the counter. I’m not telling kids to do this, please don’t do this, but you know, that just became my drink of choice later in life. I drank 40s, though; they were in when I was a youngster. That’s how I got my name, E-40, because I would drink like 8 or 9 of those things throughout the whole day. You know how everytime you’d see a cat he’d have a 40 in his hand? That’s how we used to roll. Everytime I’m in the traffic in my Cougar, I got a 40 in my hand. DUIs weren’t that serious back then. You didn’t even have to wear seat belts then. But yeah, with the Rossi, the Burgundy has anti-oxidants in it, and it goes down smooth. And it gets you right! You can drink throughout the day with it. I love Landy, I love cognac, but I don’t drink cognac all day. When I drink, I like to drink to get drunk. I don’t like to drink to drink. When I drink, I maintain. I’m a social drinker—not an alcoholic, though.

I know this isn’t an issue for you, but I was telling my boy the other day as far as bang for your buck, the Burgundy Rossi is the best you can get.
$5.99 for a big ass bottle of Rossi wine/It’s right on time [laughs]. 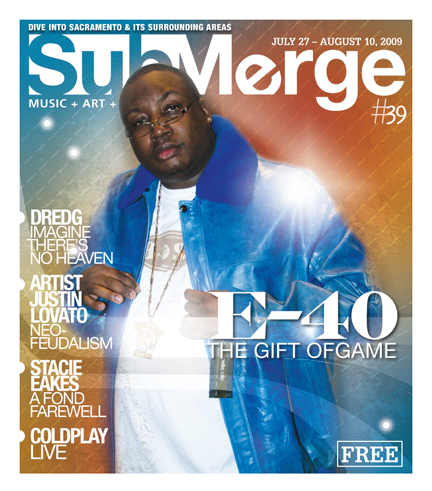