“What are you up to today?”

It’s more of a question for me than it is for them. It gets me settled—because long phone conversations with rock stars make me nervous—and on some occasions, when they’re not just doing laundry or mired in a long press day, they’re up to something cool that we can go off-script and talk about.

But Heath isn’t a spring chicken. He’s been doing this rock ‘n’ roll business—and all the sundry things that go along with it—for almost 30 years now. He no doubt sniffed out my stalling tactic right away.

“I’m deep-sea fishing off the coast of Morocco,” he shot back without pause. “And if it’s nice, I’m going to go night-skiing on a moonlit mountain in Switzerland.”

He was joking, of course. In truth he was a bit under the weather at the time of our interview and just relaxing at home in Texas, but given Heath’s fiery music and onstage persona, you’d almost be inclined to believe that wild overseas excursions are par for the course.

Night-skiing may not have been on the docket for that evening, but that doesn’t diminish the fact that Heath remains one of the coolest, most high-octane personalities in rock ‘n’ roll. And even though he’s a veteran on the scene, he and his band mates (Jimbo Wallace on stand-up bass and Scott Churilla on drums) seem to be turning back the clock on their latest album, Rev, which was released on Victory Records on Jan. 21, 2014.

His 11th studio album, Rev marks the glorious return of the Reverend Horton Heat you fell in love with in the mid-‘90s. Pedal-to-the-metal riffs mark the straightforward, brawny rocker “Smell of Gasoline,” whereas the album’s first single, “Let Me Teach You How to Eat,” rips and roars with more of a sly smile, bouncy rhythm and innuendo-laden lyrics.

Rev is sort of an oddity for a band that has so much history: it’s an album that will appeal to longtime fans of the band, and certainly open the door to new ones. In fact, it’s the highest charting album of the band’s career, having reached No. 111 on the Billboard Top 200.

In the following interview, Heath filled Submerge in on Rev’s intentionally long recording process and reflected on what got him started down the path of a rebel rock ‘n’ roll icon in the first place.

Did you ever expect to have this long of a career in music?
On one hand, yeah, I never expected it, but on the other hand, when I was a kid…I was a rock ‘n’ roll kid. I would listen to Black Sabbath and Alice Cooper or whatever, but then all of a sudden this blues thing hit me and I started to realize all of those guys were career artists. The more I got into roots music and country, I saw people like Willie Nelson who even then—this is going back to the ‘70s—my assessment of Willie Nelson was that he had a long, lifetime career…and the thing is, he’s still going! And the same with B.B. King…that was my assessment of him back then, that he was a career artist. And B.B. King is still out there. In that respect, it kind of makes sense, but to actually have it work out this way is a real blessing.

Congratulations are in order. I read that Rev is your highest charting album of your career.
Well, I appreciate that and Victory is going to be a good thing for us, because they’re doing a really good job, but looking at the numbers isn’t something that’s a good thing for a person like me to do. I’ve gotta focus on writing songs and playing guitar. Starting to look at those types of numbers forces my music into areas that it shouldn’t be.

I could completely go and make some kind of an album that would be bigger than any of my other stuff, but it would be real schmaltzy and full of a lot of cover songs and over-produced and all that stuff. I want to stick with what Reverend Horton Heat does. We’ve got something more important than us going out and having some hit songs.

Your last studio release was in 2009. Can you talk a little bit about how Rev came together and the writing process behind it?
Our last album was called Laughing and Crying with the Reverend Horton Heat. It was supposed to be a straight country album. It leaned really country, but that was on purpose. In Texas we get called to play these well-paying gigs to play the country side of Reverend Horton Heat, and that was kind of a nod to those gigs we were getting. But we’re a rock ‘n’ roll band, and we just wanted to get back to faster, uptempo, rock ‘n’ roll stuff and rockabilly-influenced rock ‘n’ roll stuff that we did in the mid-‘90s.

We got to a juncture there where we didn’t know what label [we’d end up on]. We were on Yep Roc, but they weren’t offering much money, because the way things are going now, all these great bands are able to record themselves and get great results. We got some equipment to record ourselves…we were already starting the album anyway, then we all of a sudden started talking to Tony [Brummel, founder and CEO] from Victory, and it we got on [the label]. So we had a little more money to play with. There’s a few songs and segments of songs that we did in a commercial studio, but by and large, most of that album was recorded in our rehearsal space.

Rev really captures what it’s like to experience the band live. Did that come from recording most of it in your rehearsal space?
I think it has to do with I’ve been recording a long time, and I basically know it should be a good representation of my vocal part, my guitar part, and Scott and Jimbo’s parts and their background vocals. As long as it’s a good representation of that, we can add some little things here and there, but not too much, because that’s not really being true to our sound. Of course, I’m a rockabilly so I like my slap-back echo and my reverb. That’s very much a ‘50s and ‘60s kind of vibe. We don’t necessarily go for that, but that reverb and echo is kind of authentic as a live sound a little bit.

Do you enjoy the recording process?
I really enjoyed this last one because it was all me. I would go up there at all hours of the night and the morning and all sorts of times and noodle around and write. The guys would come in and we’d play. That process went on for about a year—or six months—I kind of liked that, because even if we’ve got a big budget and went into a studio, there’s still a limited time you’re able to do that. If you’re on a really big budget, you might be able to lock out a studio for a month. That’s really expensive…especially a really high-profile one. Locking out a studio in Los Angeles for a month and staying out there and all that, it’s very, very expensive.

And it’s still limited time. A month isn’t really that long, because you’ll go in there and work on your 15 songs, and you may have two days or a day for each song, and so that’s not really that good. On this album, there were several songs that we recorded, we cut and then we’d listen to them for four weeks and say, “We’re doing that song too fast. It needs to be a little bit more heavy,” or something like that. There are several songs we re-cut four times. On a big budget, when you’re locking out a big studio, you don’t have time to do stuff like that. In a way, low budget for us gave us more of a chance to create, so we could get it right. When you’re in a studio, you have one chance to get it right. Being able to redo something four or five times was really cool.

Are you the kind of person who goes back over your older work and wish you’d done it a different way?
Oh yeah, I’m totally like that. But in all honesty, when I go back and listen to our old albums, it’s kind of better than I remember. I’m like, “Oh wow, we were pretty good.” But then I still hear the certain mistakes that are still there.

When you unveil new material to an audience, is it still exciting for you or does it make you anxious?
Yeah, it’s pretty nervewracking. A band like us that’s had a lot of CDs, our fans who paid the ticket price want to hear the songs that made them like us when they saw us live 20 or 25 years ago. We try to play a little bit of songs off of each album, but it gets harder and harder. Then you throw in the new stuff…that’s the good news for us right now. Our new stuff is getting accepted better than it has since the mid-‘90s. It’s got to be really frustrating for some of these older artists—older than us, like the Stones—who’ll spend a lot of money and time to record a new album and go on tour and only be able to play one song or the max two off the new album. Of course, we’re not in that position…but that’s one of the challenges for a career artist, getting that new stuff in there.

Get ready to get your faces melted as the Reverend Horton Heat is coming to town on March 30, 2014 at Ace of Spades. Nekromantix, Deke Dickerson and Infamous Swanks will take the stage in support. Tickets are $20 and can be purchased at Aceofspadessac.com. 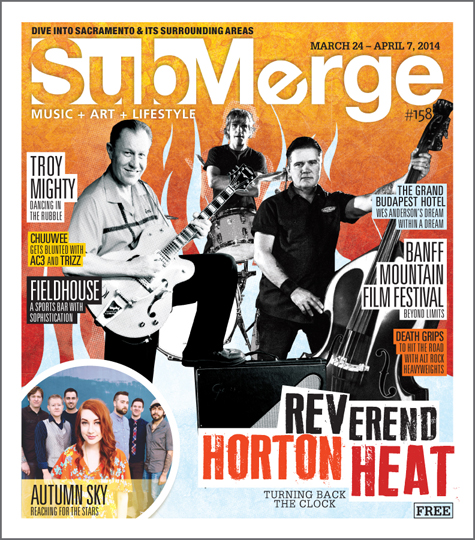