School’s Out For Summer 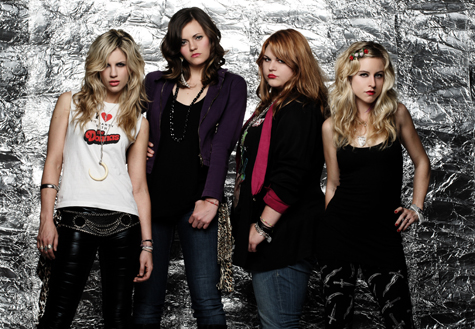 The Donnas Hit the Road With Their Greatest Hits in Tow

The Donnas sound like staying out way past curfew, sneaking cigarettes in parking lots, or whatever you know you shouldn’t be doing but would regret if you didn’t try it at least once. The foursome from Palo Alto, Calif., embodies a carefree, fun at all costs ethos, which may make it hard to believe that the band has managed to stand the test of time. Believe it or not, their self-titled debut was released back in 1997, and even before that, the four girls—Maya Ford, Allison Robertson, Bret Anderson and Torry Castellano—were making music together as far back as when they were 13.

“I think when we first started, we had no idea we would be trapped in this band forever. It’s such a terrible burden,” Ford, The Donnas’ bass player, jokes over the phone. “I think it was just purely that we didn’t have anything else to do, and we really liked music and wanted to have fun. We wanted to be cooler than the stupid boy bands at our school.”

Submerge caught up with Ford as she was busy preparing for a summer of touring. The Donnas will be heading out on the road in support of Pat Benatar and Blondie. An intimidating bill, perhaps, but Ford doesn’t seem worried about having to share the stage with some of rock’s more notable female-fronted acts.

“It’s different opening for an act,” says Ford, who reports that she’s met Blondie frontwoman Debbie Harry before and even owns “a pair of her green stilettos.”

“It’s less stressful, because people are just getting there,” Ford continues. “They’re kind of watching you, but they’re into the other bands. We want to be good, and we are going to be good, but the pressure’s not going to be on us. We just have a short set to play, and then we can just hang out with these cool ladies afterwards.”

In addition to their opening slot on the Benatar/Blondie tour, The Donnas will also headline their own slate of shows in support of their upcoming release, Greatest Hits, Vol. 16. The album is a retrospective of the band’s career, offering unreleased tracks from their early years, re-recordings of older material and live versions of their most recognizable songs. Ford took a trip down memory lane with Submerge as she made some critical tour decisions.

You’ve got a lot of stuff going on this summer. You’re touring with Blondie and Pat Benatar and also on your own headlining tour. Are you gearing up for that?
Yeah, we’re going to practice this weekend, and I’m trying to organize my T-shirt collection and trying to figure out what to wear on tour.

Are you busting out any new T-shirts for this tour?
I think I have same Scorpions and MÃƒÂ¶tley CrÃƒÂ¼e shirts, and my favorite shirt is this weird metal shirt from the ’80s that says, “’80s metal heads” on the back and on the front is this girl in a bathing suit, so she’s almost naked, and she has war paint and a big gun.

Nice! Where’d you get that?
I think I got it at the Rose Bowl.

You’re also putting out a greatest hits album this July. Is that a strange feeling?
It’s pretty exciting. We’d always talked about it like a joke. Our second album on Atlantic, we wanted to call it Greatest Hits, Vol. 2, just because it ended up being like, “Oh, it’s not a hit, you’d better write another song,” or, “Re-record that song and make it sound like a hit.” So now it’s a big “ha ha,” because we’re putting out Vol. 16. It’s cool because it’s in chronological order. It starts with the newer stuff, and then it goes backwards. By the end of the record, you’re like, “Oh my God, who are these little freaks?”

On two of the songs toward the end of the album, it sounded like you were 13 or something.
15, yeah.

How did it feel to revisit that old material? Was it difficult not to get nostalgic?
I think we all burst out laughing when we finally heard that song. We’ve had the reel forever, but we couldn’t get the right machine to transfer it so we could listen to it, because the tape was too small. And so we were like, “How is that song even going to go? What does it sound like? We know it’s funny, but how funny is it?” When were heard it, we were like [screams, then laughs].

Is there any song in particular that really ties you to a specific memory with the group?
I think the ones we were just talking about, “Don’t Wanna Break Your Head” and “Teenage Rules,” because that was back when we first started, and we were just recording in someone’s living room. We were like, “Oh, we’re going to Japan? This is so crazy. We can’t believe anyone bought our 7-inch. What is happening? This is the silliest song in the world.” We were just in disbelief. Re-recording the old songs was really fun too, because we couldn’t believe how we could possibly play that fast. It was like, “Did I play that right? It went by so fast I didn’t even realize I was playing it.”

Back then, Darin Raffaeili had a big influence on the band. He wrote the songs on the first Donnas album. How did he mentor you along?
We were already a band. We were called Ragady Anne and the Electrocutes, and we were playing at community centers and stuff. I’d made friends with this guy in another band, and he knew Darin, and he came up to us and said, “Hey girls, you want to make a rock record?” And we were like, “We already made a record. We already played rock music.” We thought he was weird. But then he tried to explain it, and we still thought he was weird, but we thought he was funny and we didn’t have anything else to do on the weekends, so we went to where he worked at Mail Boxes Etc. and recorded some songs one night. I was like, “This sounds like ‘Sheena Is a Punk Rocker.’ This is stupid. Why would anyone like this band?” We thought The Donnas were so lame. We would make fun of them as our other band all the time. We thought it was dorky and lame, but we also kind of loved it and had so much fun with Darin, because he’d always drive us around and we’d eat tacos and listen to music. He was like our fried older brother or something.

When you left your old band behind, was it Darin’s influence, or did you really find yourself musically as The Donnas?
It wasn’t that we found ourselves musically that much. We just had to fuse the two together, and it just ended up that people knew The Donnas more, because they had more 7-inches. Our songs were catchier, and Electrocutes songs were just weird and noisy and screaming. But we thought it was kind of cool, but we were really into MÃƒÂ¶tley CrÃƒÂ¼e, so when we went to make the second Donnas record, that’s when we were like, “OK, Darin, we’re going to write some of the songs too and add our own style into it,” and then he went on to his own thing, and let us do our thing by ourselves, and we were like, “OK, how do we write a Donnas song?” It wasn’t that hard to figure it out.

You were on Atlantic for a while in the early ’00s, but now you’re releasing your own records on Purple Feather. You released Bitchin’ and now the greatest hits compilation. How has it been working on your own?
We have to answer a ton of e-mails, and sometimes that’s really annoying because we all have to be CC’d on everything, but it’s pretty awesome, because we can do whatever we want. There are some drawbacks, because we can’t get an advance if we don’t have any money. There’s no big person to lend us any money, but it’s kind of nice that way, because we don’t end up spending money we don’t have. And when we have meetings, we don’t have to meet with a bunch of people we don’t know and don’t really like, we just meet with ourselves.

I’d read a quote from Allison about how you all have been able to stick together as a band for this long without any lineup changes. How have you been able to stick together for so long?
We were best friends when we started the band, and we’ve always been really close. We’ve just been through so many things together, you know? All of those experiences really bond you, and it’s hard to hate anyone who you’ve seen so many things happen to. It’s impossible to hate each other. There are days when you don’t agree with everyone, and you get annoyed and want to go home, but in the end, we’re family. 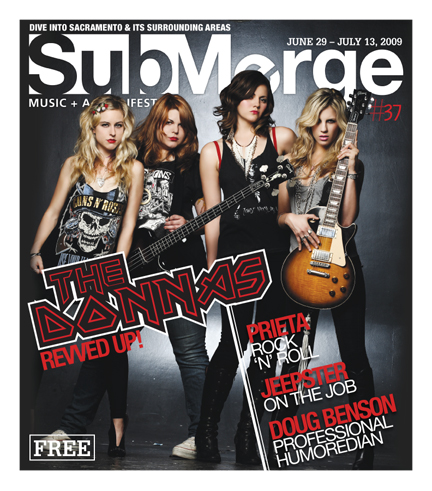