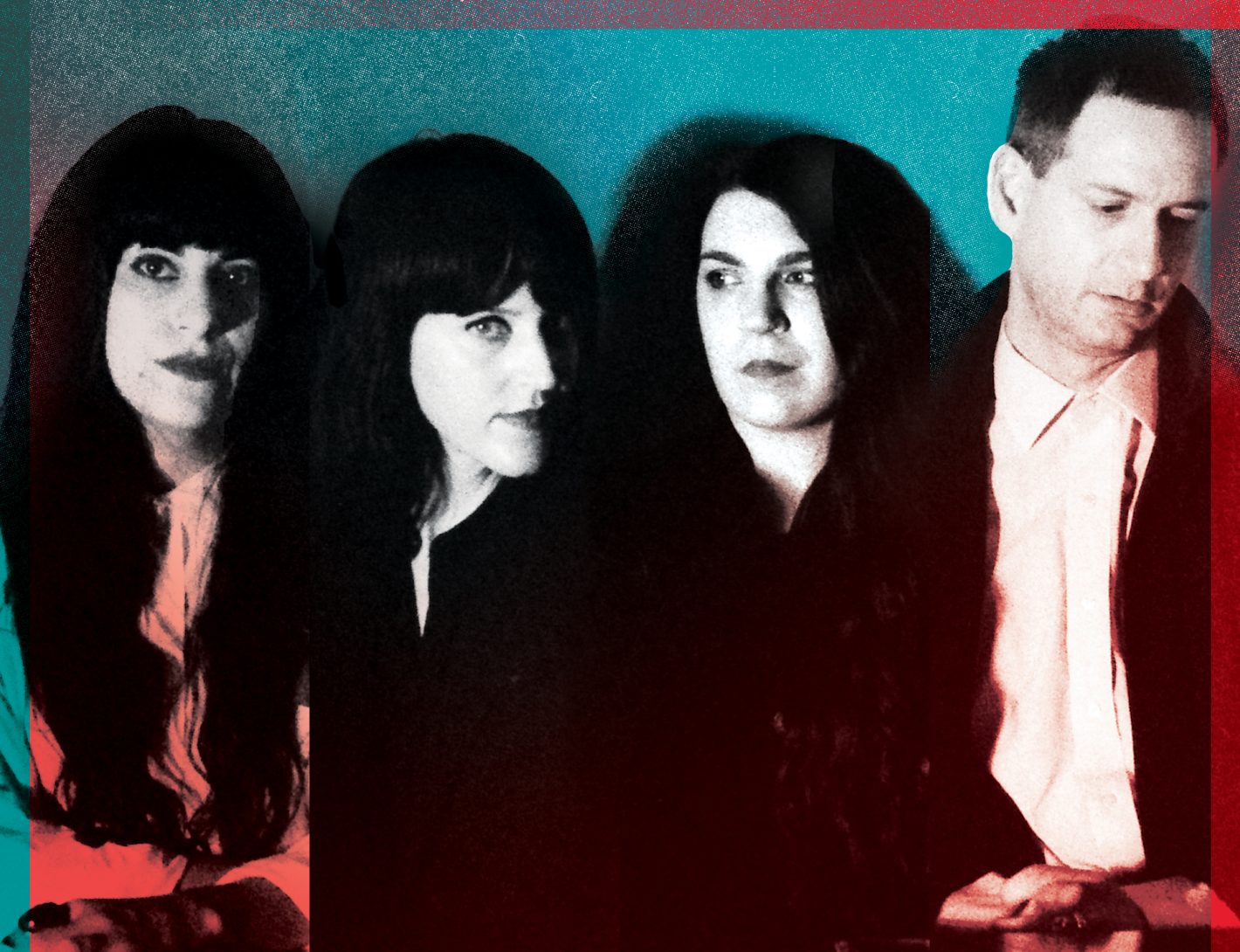 Whenever and wherever Sacramento’s Screature take the stage, they bring a 4 a.m. world of dread with them, embodying completely a dark strain of rock music that first sparked in the underground nearly 40 years ago. They are the bony gait of Famine’s horse, Alice’s final rabbit-hole descent into Hades. They are the harbinger, the massacre and the holy ghost to gloat above all—play their music in a darkened bedroom, and things begin to crawl.

Formed seven years ago, partially out of a shared interest in cultish music and UFO literature, Screature has released two full-length works: their self-titled debut (2013) and Four Columns (2015). The combined effect when listened to both without interruption amounts to a monolithic, rising wail, a dance along the precipice of sanity. The lineup is so well integrated (Liz Mahoney’s foreboding wail, Chris Orr’s jagged guitar stabs, Sarah Scherer’s murky, bass-register organ and Miranda Vera’s unrelenting drumwork) that the result is a single ritualistic howl, each element overlaying the next. When combined with the right visuals, it’s hypnotic and uncanny. Just scope their video for the single “100 Lines” off of Four Columns, a disturbing transgression captured in reverse, confirming the feeling one gets zoning out to their music that time is being demolished. Whether we get the chance to unmake our evil—or merely run the risk of getting snared by it once again—is left up to question.

In the two years since their last aural/spiritual onslaught, Screature has used the live setting as a laboratory for their forthcoming release, Old Hand New Wave. In the throng of a dark venue, the power of shared presence cannot be denied, and their most powerful statements come to life here. I was lucky enough to catch them at Ace of Spades in late 2017 in a perfect trifecta of spectral aggression with Youth Code and Chelsea Wolfe (with whom Chris Orr recorded the track “Scrape” for her latest album). Although their recordings have become ever more sophisticated, Screature is first and foremost an event, in need of living conduits to spread its doom.

But if Screature’s brand of lightning can be bottled, it is under the aegis of producer Chris Woodhouse (Oh Sees, Ty Segall) who has worked with them in the past. On OHNW, he succeeds in adding a deeper sense of fury to their output.

Standout cuts like “Induction” and “North of Order” verge on industrial metal, and provoke compulsive re-listening and wild subjective imagery—a volcano erupting beneath a cemetery, say, or a colony of vampires succumbing to bacchanalian abandon before being incinerated by the sunrise. For me, the winner is the closing track, “Another Mask,” which comes charged with a maddening, insectile guitar drone that drags the listener closer to imminent possession. Though clearly a contemporary work, it could easily be a rediscovered classic from Joy Division’s Closer or an early Christian Death record. It leaves us with the troubling conviction that there is no such thing as finality, no clear delineation between descent and ascent, that one has screamed into the void only to be answered back, “Do what thou wilt.”

Below we share a brief encounter with two of the mad geniuses behind the curtain of Screature, Mahoney and Orr. 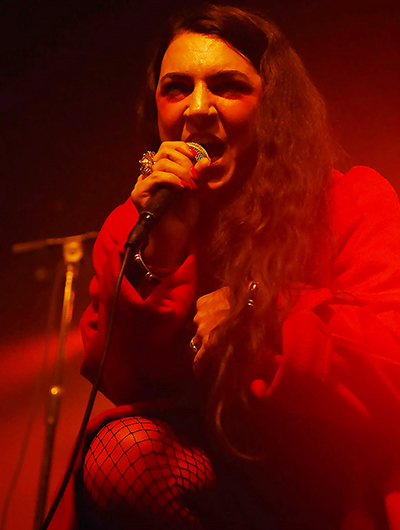 The first two singles off of Old Hand New Wave sound heavier, more doom-laden, more intense. Would you agree with that, and is there something that pushed you in this direction?
Chris Orr: I agree. This is the heaviest Screature has sounded. Part of that was Woodhouse’s heavy hand—the drums are doubled and effected, the organ’s got deeper teeth this time round. Both drums and organ are more present in the mix, which helps thicken it up. The guitars weigh a ton [with] feedback, wah, even my first guitar solo. Liz just brings the roof down on the whole affair. Her vocals are devastating on OHNW. Beware.
Liz Mahoney: I had just joined the O.T.O. (Ordo Templi Orientis) when we started writing this album, so some of the lyrics reference this experience. I was initiated the day before we started recording, so that was very intense for me. I think the impact bled into my performance on the album.

What were your first encounters with dark/new wave/post-punk music? Would you say you’ve been steeped in these genres your whole life?
CO: We’re all well-steeped in the genres you mention, though not exclusively, and some of us more than others. Some steeping you spend your whole life trying to shake.
LM: I definitely encountered it before I knew the terms for it. I was 5 years old when there were new wave hits playing on the radio and in all the movies I loved, but to me they were just popular music! 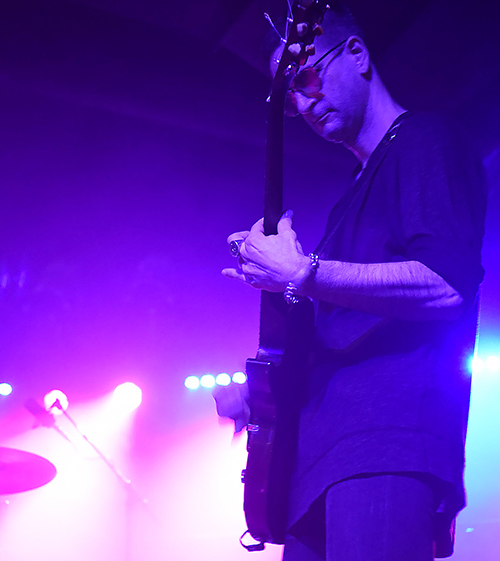 What drew the four of you together? Did you know each other before 2011? What were your interests when you started out?
CO: The women in our band have been friends since high school. Some of us are lovers, others are practically sisters. I’m a Louisiana transplant. But yes, all before 2011. When we started we were interested in overcoming creative blocks. Screature started as a book club/group therapy meeting once a week with drinks. We barely made it through Whitley Strieber’s Communion before we turned our focus on becoming a four-piece.
LM: I met Miranda when I was 11, Sarah when I was 13 and Christopher when I was 17. Miranda and I lived together as sisters from the first year we met until we graduated high school. We clocked a lot of hours at the Cattle Club and watching MTV. When we started, I had shifted my focus from running a live music venue, Fools Foundation, to wanting to perform.

What has been your experience performing with Chelsea Wolfe and Youth Code? What’s your method of trying out new songs live? Do you shape the songs by reading the crowd, or is there another way?
CO: Both bands seem to leave a bit of themselves on stage. The next night we witnessed them eager to get back up there and reclaim it, only to leave it behind again. That’s inspiring. I want to learn to live on stage.
LM: Such an amazing experience! We are so blessed to have such hardworking, magical people in our lives who support what we do. I am usually chomping at the bit to play a new song live, especially in the midst of still figuring it out.

You invite me over for a night of drinks, film-viewing and music listening: What is the lineup for our night in? How do you get across the ethos of Screature without using your music as reference?
CO: Hey pal, nice to see you. Tequila, soda, lemon? We’ve made one just for you. Yes, that’s Machine Gun Etiquette on the record player. Now sit on the floor, we’re watching Communion on mute!
LM: What he said!

Experience Screature live at the Submerge Mag 10 Year Anniversary Party on Saturday, Feb. 3, 2018, at Holy Diver (1517 21st St.). Also performing will be Horseneck and Destroy Boys. The show is free with a $10 suggested donation at the door, with a portion of the proceeds going to a cancer charity. All ages are welcome, doors open at 7:30 p.m. Old Hand New Wave comes out Jan. 19 on Ethel Scull Records. Learn more at Facebook.com/screaturesound or Screature.bandcamp.com.