Their Crosses to Bear 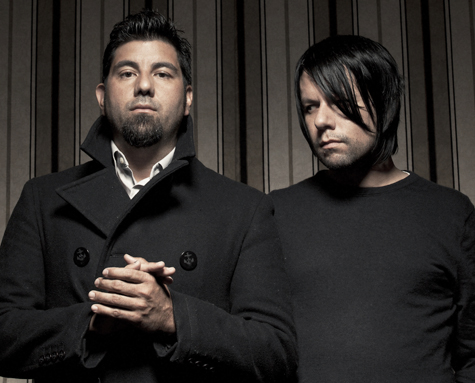 Shaun Lopez (guitarist for Far) and Chino Moreno (vocalist for Deftones) have left an indelible mark on the Sacramento music scene–as well as rock music beyond the River City. Sometime last year, the two (along with bass player and songwriter Chuck Doom) began meeting–more or less in secret–on a new project that would leave a new kind of mark, âœâœâœ, aka Crosses.

Lopez and Moreno worked closely together before, though according to the Deftones vocalist (who also provides vocals for Crosses), it wasn’t the most positive experience. Moreno says that the vocals for Deftones’ Saturday Night Wrist, released in 2006, were recorded at Lopez’s studio.

“We worked pretty close then–a little too close,” Moreno says. “It was a gnarly time. There was probably one point when we were doing that that I said in my mind, ‘I will never work with Shaun again.’”

Lopez adds with a laugh, “I said the same thing.”

One thing positive that did come from the experience was that the two remained friends, despite the difficulty. Moreno recalls that it was a rough time for him personally and that he felt a lot of pressure surrounding Saturday Night Wrist. This time around, however, things were different. Crosses didn’t bear the same level of expectations as did that Deftones album. In fact, for the most part, no one even knew that Moreno was working on new music.

“The music is pretty powerful,” Moreno says. “I hate to sound corny, but when we get together to make some stuff, it straight up sounds good. I think we just enjoy that.”

Crosses got off the ground with just Lopez and Doom at the helm. Lopez says that he’d met Doom two or three years ago through a mutual friend. Doom was looking for a space to lay down tracks for another project he was working on, but as he and Lopez began getting to know each other better, they began writing together.

“He started bringing in some other ideas that were different than what he was doing already,” Lopez says of Doom. “I thought that it was really cool, maybe I can throw some stuff on top of this. Maybe we could do some co-writing. That was sort of the birth of Crosses.”

Beyond that, Moreno calls the enigmatically named Doom a “very interesting guy.” Moreno says that Doom has a penchant for “really old gear” and still employs floppy disks as part of his recording arsenal.

“I think that’s inspiring to me, because it’s not like he’s got an iPad in some room and he’s making shit that sounds like everyone else,” Moreno says. He goes on to praise Doom’s tireless, and perhaps eccentric, work ethic.

“I’ll get an e-mail at 7:30 in the morning sometimes, and it’ll be a 30-second clip of four chords with this weird loop around it… It’s kind of cool to see how [Crosses songs have] evolved from something as little and abstract as that.”

Moreno was the final piece of the Crosses puzzle. Originally, Lopez had planned on having a revolving door of different vocalists to sing over the music he and Doom were creating, but once he heard Moreno sing over a track, it seemed like he needn’t look any further.

“Once we heard what he could do over it, and it just really made sense,” Lopez says. “It all just sounded like something we could hear Chino’s voice on. He basically told us, ‘I don’t want anyone else singing on these songs.’ It was nice that it worked out that way, that it was really natural and really organic, and nobody was forcing anybody to do anything. He was like, ‘I really like this. I want to sing over these songs.’ He heard it, and then we started writing more songs, and he said, ‘I want to sing on all of these.’ So we were like, let’s do it.”

It must have been the right formula, because the partnership became pretty prolific. Moreno reports that the trio produced over 20 songs in about six months. The group released its first album, a five-song EP titled EP âœ in August 2011. The album was released for free download through the Internet (it can be downloaded at Crossesmusic.com). Another EP, EP âœâœ, will be released in the same manner on Jan. 24, 2012. The goal is to release a third EP thereafter, and Moreno hopes that they will then compile them all into a full-length album along with five new songs. Both he and Lopez are reveling in the fact that they’re making this music on their own, with little outside pressures or expectations.

“To me, that’s one of the lamest parts of being a part of a big label, at least from my experience,” Moreno says. “Every time you’re making a record, you have someone’s opinion who’s outside of making the record, it’s always a damper.”

“And not so much the label, but anticipation from outside the project…right away there are a million opinions of what it’s going to sound like, what it should sound like. We went into this without any of that. It was cool to do it for fun as it went along. Now that it’s done, I guess people will have their opinion now, but it’s done. It is what it is.”

What it is may not be what Moreno’s fans expect or even want to hear from the lead singer of Deftones. EP âœ is a dark and brooding, ambient yet heavy release, perfect for turning up loud in your headphones and losing yourself in. “This Is a Trick” opens the album with creepy organ sounds washing over a glitchy digital beat that gives way to a chorus in which Moreno’s voice fluctuates between an almost pleading tone to a more metallic yell. From there, the EP traverses down more of a trippy, atmospheric road. Lyrically, the album seems to hold common themes of fantasy versus reality. Moreno says that these are ideas that are actually apparent in his other projects.

“I have a hard time deciding that I’m going to make a song about this topic and just doing it,” he explains. “To me, that takes away all the fun. It puts up walls all around you… I think that’s where the escapism comes through in the lyrics, with all my projects. It’s not like I write differently for this project or that project. When I sit down to write, it comes out however it comes out. A lot of times, it’s a sort of fantasy/escapism, things that are so detached from everyday life or emotions or feelings. I think those things come through anyway.”

Similarly, Lopez and Moreno have a take it as it comes approach toward Crosses. The band will be playing a series of live shows starting Jan. 31, 2012 something they hadn’t really planned to do with the project at its inception. Crosses will play a string of four dates in California, and then two dates in South America (Santiago, Chile for Lollapalooza Chile and Quilmes Rock 2012 in Buenos Aires, Argentina) in late March/early April.

As for the upcoming EP, Moreno gave few details. He says that he doesn’t feel comfortable describing what it will sound like, but mentions that it was recorded at the same time as EP âœ, so it will have a consistent feel, though it will probably be more up-tempo.

“I don’t want to give anyone any pretense of anything,” Moreno cautions.

Those with adventurous ears may find Crosses very rewarding. If nothing else, it’s a shining example of what a group of talented songwriters can do when they’re free to create as they will.

“I think that’s a liberating thing, especially for Chino, that we write, we record, we mix the record, and we basically turn it in and it’s out,” Lopez says. “There still aren’t a lot of people who know about it, which is cool. There are more people learning about it every day, which is kind of what we wanted.” 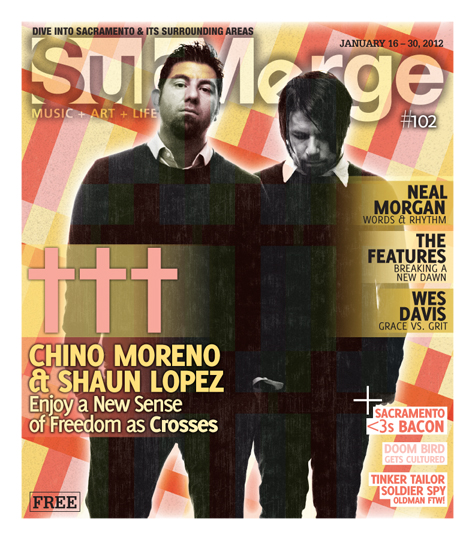 Crosses will play Ace of Spades in Sacramento on Feb. 3, 2012. Also performing will be Secret Empire, Dawn Golden and Rosy Cross. Doors for the all-ages show will open at 7 p.m., and tickets can be purchased through Aceofspadessac.com