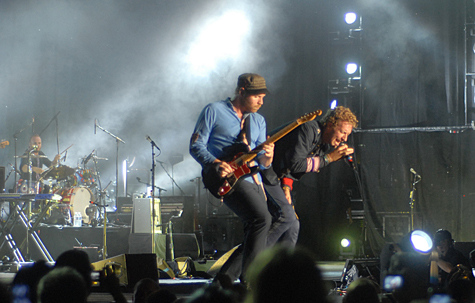 If they say the music industry is in a bit of a bind, Coldplay wouldn’t know the first thing about it. The London-based alternative rock quartet has sold tens of millions of records worldwide and consistently draws enormous crowds wherever they perform. This night was no different; Sacramento and its surrounding areas had shown up in full force. As the blistering sun descended behind Sleeptrain Amphitheatre, a sea of Coldplay fans geared up for a performance they will not soon forget.

The smell of beer and “other substances” filled the packed amphitheatre. As segue music halted and the lights dimmed, it was finally show time. A couple flame twirlers briefly occupied the stage, mesmerizing the crowd as the band members took their positions behind a giant see-through curtain. Without any sort of introduction, they immediately went into the song “Life in Technicolor,” the first track off of 2008’s Viva La Vida. It’s mostly an instrumental track (it features a couple whoas from all four band members) and served as a great warm-up for the crowd. Fans swayed back and forth to the up-tempo beat as they watched Chris Martin, Coldplay’s bouncy frontman, dance around the stage. The second song, “Violet Hill,” really got the crowd into it. As the mass of fans sang back every word, it was hard not to get the goose bumps. You have a good voice, Sacramento! Martin did a fantastic job making the crowd feel appreciated by changing up the final line of the song that originally goes, “If you love me, won’t you let me know,” to, “If you love me, won’t you take me to Sacramento.“ Clever little bug.

For the next 30 minutes or so the band proceeded to bombard fans with hit song after hit song, including “Yellow,” off their 2000 debut Parachutes, in which dozens of giant yellow balloons were unleashed throughout the crowd. It was quite a sight to see, adding immensely to the awesome light show and videos projecting behind the stage. At the end of the song, Martin popped a couple of the confetti-filled balloons with the sharp, cut-off strings on the head of his guitar, coaxing laughs out of the crowd. The next highlight was when the band completely left the stage and ran into the audience, where there was a miniature stage set up in the upper lawn section, turning the nose bleed seats into the front row. Blankets and chairs were trampled as crazed fans rushed the mini-stage to get closer to the band. They played a few tunes, all acoustic, including a cover of the late Michael Jackson’s “Billy Jean.” Although I will admit I knew the cover song was coming (someone on my Twitter feed spilled the beans the night before when Coldplay performed at Shoreline Amphitheatre—Twitter needs a spoiler alert), it was still a pleasant surprise and Martin sang the difficult melodies quite well.

After the band proceeded back down to the main stage, they played a few more tunes. Then came the obligatory leaving of the stage only to get cheered back on for an encore. After the entire crowd chanted, “Coldplay, Coldplay!” for a few minutes, the band came back out and Martin announced they had just two more songs left. The first of the two was “The Scientist,” the second single off their 2002 album, A Rush of Blood to the Head, and it again enticed the crowd to sing back every word. The final song of the night, “Life in Technicolor II,” is a different version of the set opener (it includes lyrics). It was a great way to bring everything full circle and wrap up an amazing show. Just before exiting the stage for good, Martin explained that they would be giving away CDs for “zero dollars and zero cents,” and thanked fans for “giving us our jobs.” It’s good to know they’re grateful. Everyone walked away satisfied and eager to pop their free CDs into their car stereos.