TBD Festival, West Sacramento, Oct. 4, 2014: Even though the sun went down hours ago, warm dust still erupts into the air like the billion microscopic remnants of an obliterated world. My mind is already reeling from the gauntlet of great acts I’ve been shuttling back and forth to glimpse from one patch of riverfront land to the next; brilliant, virtuosic performances seem to flare out on all sides from different vistas, pushing the inter-stage wanderer towards a kind of polyphonic high. The sound, the flashes of light, the smell of incredible food and the miasmatic, billowing dust after a full day of sun have started to take their toll.

Determined yet tired, I trek towards the far side of the concert area, into the volume and light, to secure bodyspace for the concluding main stage performance of the evening. But somewhere around the halfway point, I pause, struck by a bluish ethereal glow and the thrum of brooding synth and bass accompanied by emotive, full-bodied vocals. I am caught off guard; the sound beckons, the conflicted groove is perfectly in sync with my mental state; it zeroes in on me with an intensity that isolates instead of pummeling the senses. I gaze up at the stage, and enter the realm of Sister Crayon.

Shine Coffee, Sacramento, July 11 2015: I’m sitting across from Terra Lopez and Dani Fernandez, the creative force known collectively as Sister Crayon. The two are remarkably down-to-earth and open, a fact which their otherworldly, often mercurial music belies. Never before has their sound been honed so sharp as on their newest release, Devoted, released early last month. Pared down from a four-piece to their current duo, the project has plunged ahead with the carefully crafted sonic workings of Fernandez and the intensely personal lyrical performances of Lopez. Both are keen to show the specific sources from which their creative output arises, whether it be turbulent personal relationships or a diverse array of contemporary artists and budding music genres. The night before our meeting, the two even showcased some of their favorite material at Dive Bar as a DJ set, and are gearing up for a live show at Harlow’s in early August—their first locally since the release of Devoted.

Our caffeine-fueled discussion, recorded here, skirts topics ranging from spirituality, love and hate and the risks of creativity. Enjoy!

How did the DJ set last night go? What sort of material did you select?
Terra Lopez: Last night was a lot of fun. Good crowd, good energy. It’s always fun coming back to our hometown. We just like to play songs that we like really loud [laughs]. For our set we selected a lot of footwork, a lot of juke stuff from Chicago, deep house, a lot of drum/bass-heavy stuff that’s really influenced our sound and resonated with us. A lot of beat-driven songs, a lot of bassline.

How was the process in crafting the production on Devoted?
Dani Fernandez: We wanted to focus more on a beat-heavy sound and showcase the vocals, and we’ve never really done that on our last albums. There were so many other things going on before, and we wanted to strip that away.
TL: We wanted to make a sound that was undeniable, with how I was feeling lyrically, we wanted that to take precedence along with the beats, and not have anything crowd it—almost a minimalist approach the whole time.

What was the first creative step taken with that album?
TL: We demoed a lot in Sacramento and in Oakland, [Fernandez] lived here at the time. And we would just send each other ideas back and forth. For the first time, we got on a plane with 20 unfinished tracks—we had never gone into a studio with unfinished ideas, so it was really scary. We both didn’t know what to expect.
DF: This was the first time we had done a record on our own.
TL: Yeah, it was nerve-wracking. We got to Florida to work with our producer Wes Jones in St. Augustine and we spent two weeks there in this tiny little town. We didn’t know anyone except for Wes, and we slept and lived at the studio for two weeks—it was a very isolating experience. We were basically in our heads for two straight weeks, and it drove us a little crazy … But it was awesome. It was incredible to be so isolated, it felt like an alternate world that we were in.
DF: Almost all of it just spilled out in those two weeks, very easily. There was never really any arguing.
TL: It was pretty much a dream to be able to work that way. To have that freedom. And then literally on the last day, on our way to the airport, Omar Rodriguez-Lopez [of The Mars Volta] wrote me and asked if he could help produce the record.

I understand Omar had been a fan of your project before he stepped up to produce?
TL: We were lucky enough to go on tour with one of his projects in 2013, and we toured with them extensively and from that tour, we built a friendship with him and his band and so they really liked what we were doing, they would watch us every night, and hang out with us. You know, he’s a pretty reclusive guy, so the fact that he even wanted anything to do with us was a big deal.
DF: We knew that he liked us when he invited us to the movies one night on tour. He doesn’t do that regularly. He likes to stay to himself on tour, not really be on the scene with everybody, but he was totally talkative, wanted to get to know us, loved what we were doing, loved the sound. And you could tell that he was really curious as to what we were setting out to do. It was really cool.

So overall, it was a pretty tension-free recording process?
TL: Yeah, we were very grateful to have had the team that we had, because it was such an organic process. We would spend eight-nine hours working with Wes on the songs, and if we needed a break, we’d go jump in the ocean, and then come back and work until two, three or four in the morning, and then start over the next day—and it was like that for two weeks.
DF: Now I get why artists tend to record in secluded areas. They’re always holed up near a beach, or at a cabin in the woods somewhere. It makes you really focus and hone in on your music. It’s probably going to be the way we record from now on.

I understand you featured “Ride or Die” as a video to coincide with the recent SCOTUS decision?
TL: We did. We had actually shot it a week prior, and it wasn’t a planned thing. I had woken up that morning and seen the Supreme Court’s ruling and was so inspired. So I reached out to the director and was like, “If there is any way that we could release that video today, it would be so fitting.” The song is a celebration of love; the video definitely is. We really just wanted to celebrate the day. Dani and I had never really put ourselves out there with our orientation; it’s a known thing among people who ask us, we’re very open, but we had never really put it out there in a video. Everyone was on board, so we just released it. It was a beautiful day, just a gorgeous day, a really proud moment. To release something in correlation with it meant a lot to us. We were finally able to put the message of our music forward in our own subtle way.

Along with these feelings of a triumph of love over hate, there’s also been a good deal of ambivalence towards the concept of love in your work …
TL: It’s incredible that you picked up on that, because I’ve done a few interviews where that kind of goes over their heads. For me, I was in a place when I wrote that, when I was starting to write the lyrics for these songs, I was heartbroken. I’d been in a five-year relationship, had my heart broken, and I’d never experienced a loss like that before. A loss of love, but also a loss of self-motivation—it was the first time it had ever happened to me, and I really clung to this record with Dani, in order to get out of bed most days back then. So for me, I wasn’t singing about that love loss, necessarily, I just didn’t believe in love at all. During those months when we were writing, I really didn’t, and I was questioning it, dissecting it. I had always believed in love, and I’ve always wanted to, but I was definitely in a place where I was trying to figure out if I still did. And so the whole album was basically a way—we called it Devoted because it was our way of practicing devotion as a way to restore our faith in it. And so there’s definitely moments, it’s kind of like a roller coaster where I’m clinging to that belief that it’s still there, even though I don’t feel it.

It seems like many of your releases have been influenced by particular relationships?
TL: I think that with Bellow and Cynic I was very vague in my language. Especially on Bellow … we were so young and didn’t think anyone would even hear that album, so we made it for ourselves. As a songwriter, I was very, very vague. I would speak about people in metaphors—you would never know what the hell I was singing about. And Cynic was very much straightforwardly about my mother and my father and my childhood, but I still was a little vague about expressing myself. When the time came for Devoted, there was no way around it. I didn’t have the time or the energy to make metaphors, I had to express exactly what I felt.

What’s next for Sister Crayon? What should we expect at Harlows on Aug. 1, 2015?
TL: We’re working on two videos and some remixes; a lot of content coming out in the summer and in the fall. As for Harlow’s, expect a brand new set of songs that we’ve never played here. Just an entirely new experience, new merchandise and new feelings We’re coming out with a completely different kind of performance.

Give Dani and Terra a warm welcome home to Sacramento! Sister Crayon will play Harlow’s on Aug. 1 with DLRN and Stevie Nader. Doors open at 9:30 p.m. Tickets for this 21-and-over show can be purchased in advance for $12 at Harlows.com. 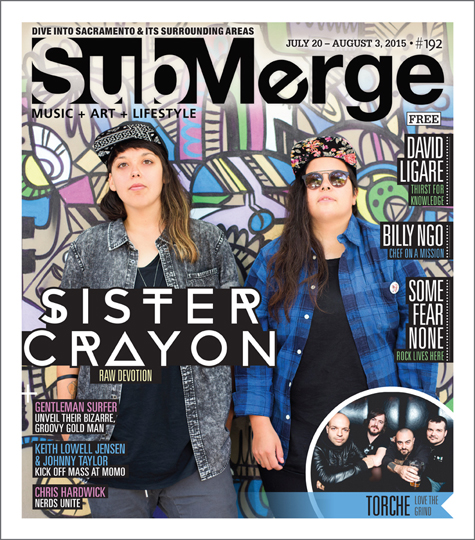