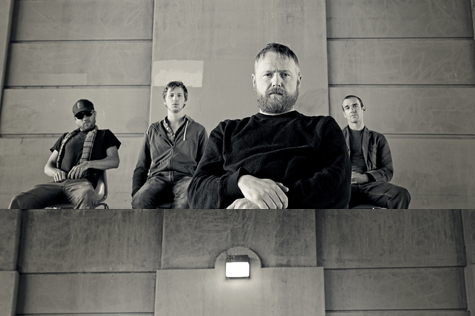 It’s OK if you think Tim Holland is pretentious. It’s not something that bothers him. Otherwise known as Sole, Holland was co-founder of Anticon, an avant-garde hip-hop label based out of Oakland that has often been accused of being hipper-than-thou.

“You can’t be ruled by insecurity,” Holland says over the phone from his home in Denver. “You just have to do your thing, you know?”

Doing his own thing is something that Holland has done his whole career, be it through his music or his label. Over the past couple of years, however, he’s pushed the boundaries of his independence even further. In early 2010, Holland parted ways with Anticon, citing a desire to grow creatively. True to his word, on July 19, 2011, Holland released his third Sole album with the Skyrider band, Hello Cruel World, which features a notable shift in direction for the MC and his band. Gone is the rapid, perhaps indecipherable, delivery and dense stream of consciousness lyrics placed of his earlier work. They have been replaced by a focused and more ruthless attack. He says in the past he’s been criticized for being a poor self-editor, something he worked to change on Hello Cruel World.

Holland in part attributes this artistic shift to a growing interest in gangsta rap. He had released a couple of mixtapes dubbed the Nuclear Winter series (two volumes thus far released in 2009 and 2011) in which, “I was just making this gangsta shit for fun, taking these gangsta songs and making them political,” he says. It ended up having a larger effect on his work.

“Once I started that way, I couldn’t rap like Sole anymore,” Holland explains. “When I would rap, what would come out were these slower, more deliberate styles. Making those mixtapes bridged me between [Sole’s 2003 album] Selling Live Water Sole to Young Jeezy Sole.”

This wasn’t so much out of a desire to mimic a form he had grown so enamored with, but it was borne out of wanting to make more of an impact on his audience with his lyrics.

“After a while, I’d be on stage huffing and puffing, and all people could say was, ‘Wow, that was intense,’ It’s like, ‘No, I spend all this time reading and writing lyrics. I want you to get what I’m saying,’” Holland says. “I want this to operate as folk music. I want people to hear it and go, ‘Oh, that hits me.’”

Holland says that the change of direction was a “natural progression,” but over the course of our interview, the artist also expresses a desire to reach more people by becoming more populist and less abstract. Submerge awoke Holland from a well-deserved nap and had the following conversation.

How’s it going? Are you getting ready to go on tour?
I was actually taking a nap. We’re putting together a DVD. It’s like a documentary kind of thing. On Final Cut, you have to render shit, and, like, this thing has been rendering for 24 hours. We were up all night working on this thing… We’re about to go until 2 a.m. again, so I thought I’d take a little nap to get recharged.

How’s the documentary coming along?
[Laughs] It’s really pretentious! It’s ridiculous, man. It’s supposed to be a documentary or something, but it almost ended up being a really in-depth two-hour interview about history and philosophy. It’s just fucking absurd, man!

Lately, I feel like my approach to rap is how much can I get away with.

How did the documentary turn into something completely pretentious? Did it just start to get out of hand?
No, we were just like, “What are we going to do with this?” I was thinking, what would I want to see if I was going to watch a documentary about me, like, what would I want in it? I would want real shit, like what drives this fucking shit. It’s just funny, man. I don’t know if it’s pretentious. I think it’s borderline for sure, but no one’s called me out this year for being pretentious, so maybe they won’t this time. Who knows, man [laughs]?

What are your plans for the documentary once it’s done?
We’re going to sell it on tour, and then depending on the responses, we’re going to sell it in stores. But really, it was just like we had made all these videos, and we were like, “We should just sell this shit.” We figured out a way to pay ourselves for all this work we did. And then we were like, “We need some meat to it,” so we held it all together with this interview. It’s the first one. The next one will probably be my House of Representatives bid [laughs].

Do you have a platform in mind?
Denver’s first district, she’s like the deputy whip for the Democratic party. She voted yes for sending ground troops into Libya. That’s really all I know, but that’s enough at this point. Otherwise, she’s pretty cool. At first I was like, “How can we keep with the political commentary, do something different, more propaganda, more controversy. Oh, run for president.” John [Wagner, drummer of the Skyrider Band and the person filming Sole’s documentary] was like, “You’ll never win. Why don’t you start small? House of Representatives.” Yeah, get Soulja Boy to give me money.

That’s not a bad idea.
No! It’s not! I feel like if I came at Lil’ Wayne and all these millionaires, who knows? If I can get each of those dudes to give me $200,000, like why not? I’ll legalize crack in Denver. Whatever they want.

Hello Cruel World marked a new direction for you. Did that make this album pretty exciting for you, to expand in that way?
Yeah, this was around the time when I left Anticon, and I started doing the D.I.Y. thing pretty hard. Everything was new and exciting. It was almost like we had blocked chakras. Kind of scared to make any moves to the left or right, just chugging through. Then we just decided, “Fuck it, we’re going to go for broke now, make it all about doing new shit.” When you figure something out like, “Oh, we can be the first indie underground cats to do some really cool sell-out shit.” We were the first to think of that. Everyone else is trying to cross over to electronica or indie rock. We wanted to cross over to rap. It’s fun when you can trademark new movements. In that aesthetic–the Kanye West/Jay-Z big album aesthetic–I feel that it’s so rich. There are so many ways–we could hire a fucking philharmonic orchestra on our next album and have no electronic sounds, and it will still be consistent with the concept of a big rap album. We can do anything.

You mentioned before that you were frustrated with your situation. Was that creatively speaking, or was it your business situation with Anticon?
It all kind of ties together. When the stomach is grumbling, art suffers. Some people work really well under stress. I work really well under a healthy amount of stress, but we never had budgets for studios. We never could have made this album if Fake Four [Sole’s new label] hadn’t given us studio budget… It was also a shitty time for the music industry. The music industry was going through all these changes. Figuring out how to adapt to that over the years has been really crazy. My answer to it all has been to pull all my assets in so I could have a healthy iTunes cushion and a creative space so I wouldn’t have to go frantically searching for my next shitty thousand-dollar show I’d have to play so I could pay my rent.

Was it a case of not getting any younger and needing to get yourself more established?
I’m married, and my wife is a teacher. We want to have kids. We want a real fucking life. I hate that every couple of years I doubt myself, and I think, “Oh, I need to get a job, I should try to be a professor.” And that sucks. Some people function really well by taking the pressure off their art and getting a day job, but that’s not the life I envisioned for myself. I’m an artist. If anything, art will lead me to have a talk show or do something else down the road, not like, “Oh, I need to wash dishes right now. I need to drive a cab, because the IRS just wiped me out again.”

One of the lyrics on the first song, “Napolean,” jumped out at me, “At age 20, knowing everything was my style. I was older then, I’m younger than that now.” Does that play into this new direction you’re heading? Do you feel more optimistic now?
I do. First of all, that’s a Bob Dylan line. The irony is I discovered Dylan when I was 20. But that line sums it up for me. When I was 20, I was this miserable brooding kid. I was running a record label. It was this crazy workload. When I left Anticon, I had to decide. Am I going to start another record label? Am I going to put out other artists? What am I going to do? I decided to just focus on my art and focus on myself. I didn’t want to burn out… I realize I’ve kind of squandered some of my best moments in life by not making the most of what I had. Just being like, “When this happens, then this,” just living in some kind of future. What you’re doing has to be an end in itself. You can’t always be living in some fantasy where you’re going to be rich and famous in the future. I’ve got friends who I’m happy to collaborate with. It’s 10 years later, and people still like my music, and it’s more relevant than ever, and it’s a good time to be fucking around, you know?

Sole and the Skyrider Band will play the Sol Collective in Sacramento on Aug. 16, 2011. This is an all-ages show, and tickets are $10. Aquifer and Defeye will also perform.