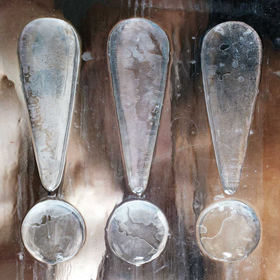 Nic Offer of !!! Talks About The Weather

Creative people come in all kinds. The creative environment that works for you may not work for me. Maybe you need seclusion, a familiar place, peace and quiet, or maybe you require a Scarface-size mountain of coke and a room full of half-dressed, semi-conscious admirers strewn about the floor to craft your magnum opus. Hey, whatever works, right? For their latest album, New York by way of Sacramento band !!! literally traversed the globe, committing its latest batch of songs to tape. Strange Weather, Isn’t It?, the band’s fourth album, was recorded in New York, Berlin and even right here at the Hangar in Sacramento. Frontman Nic Offer admits that though it may sound exciting this probably isn’t the most economic way to work.

“It’s not always the best way to do things, but it’s kind of the way we ended up,” he says. “We’re living in four or five different towns with the majority of people in New York. We can’t just make everyone come to New York, so we pick some place to meet up.”

Location-jumping in order to get work done isn’t new for the group. Offer says the band has met up to practice in a variety of different places, such as Seattle, even though no one in the band resides there.

Berlin, however far off it may seem from the River City or even the Big Apple, was not an entirely random choice. The band’s now-former bassist Tyler Pope called the German capital home. Even more so, Offer says that the decision to record in Berlin was a creative one. In !!!’s most recent bio, the frontman is quoted as saying “Everyone’s got a Berlin record in them, and I guess we just wanted to see what ours would sound like.” However, in our interview, he mentions that the remark was meant to be taken lightheartedly.

“It was really just a joke,” he says. “Anyone can just go there and do it. Everyone’s got a Sacramento record in them, you know?”

Jokes aside, Offer explains that recording in Berlin did have a certain draw to it.

If hopping continents to record the album weren’t enough, !!! also underwent a series of lineup changes around the time Strange Weather… was written and recorded. Pope exited while the album was being recorded; meanwhile, John Pugh and Justin Vandervolgen departed before writing began (compounding the tragic death of drummer Jerry Fuchs in November 2009). All of these changes mean a very different !!!, and it shows in the music. In the following interview, Offer talks about his creative process, recording Strange Weather…, hanging out in Berlin and his signature dance move.

Are you guys into a lot of the Krautrock stuff?
When we first started the band, it was right when we were getting into Can, and we heard how they would jam for 14 hours a day in some castle in Germany, and that just seemed completely unreal to us. Now, with the change of technology, we can jam for hours. We couldn’t afford to buy that much tape and hire somebody for that, but now with computers, you can jam as long as you can stay awake and not have to stop it. And there we were in Germany with the opportunity. It was like living the dream, to be there and have nothing else to do but jam.

It’s interesting to hear you say that you did a lot of jamming when writing this record, because the album is very tight. There is almost a pop-y feel to it. Did that come out of the jamming process?
There are songs on there that are from hour-long jams that we could have [written] a whole other song out of. It’s like we would jam, record it all, then make loops of the best bits, put them next to each other and listen to them together to see where people got the most excited. Lots of things we had to let go come back in later songs down the line or something. It’s a big process of narrowing down that got it down to something so pop.

Was there an inclination to make more sprawling songs? When did you feel it going in a tighter direction?
It was really a conversation I had with my friend Margo. She was complaining about how our songs were too long and jam-y. At the time, the conversation kind of hurt my feelings a bit, but I just kept hearing her voice in my head as we finished the record. If anything, you just want to make something your friends like. If your friends are listening to it, not just because they’re your friends, but because they like it, then that’s a really high compliment. That’s something we’re always shooting for. We’re shooting to make Margo happy.

So she’s sort of like a member of the band?
Yeah, she’s our executive producer.

Was that something you were feeling at all–that your songs were too long, and when she said it, it kind of backed up what you were thinking?
No, actually, that was the thing. When you get criticism, sometimes it’s like you kind of did already know it and didn’t admit it to yourself. You’ll hear it and say, “Actually, that is kind of right.” When you don’t agree with it, it’s good because it makes you work harder to get your point across. It’s like, “That’s not working for people. This is exciting me. How can I make what excites me work for other people?” It just makes you hone it better. That’s one of the really good things about criticism. My advice to any musician would be to learn how to take criticism and find someone who can criticize you well and that you trust. That’s important too, because some people just talk out of their ass, and you don’t need to listen to them. To have a really good friend who you know you can play something for and they’ll tell you the truth is really helpful as a songwriter.

When you were recording out in Berlin, did you spend a lot of time in the clubs?
We tried to as much as we could. You have to keep it together and not get too wasted so you can do something worthwhile the next day. We were going out as much as we could, really–or some of us would. Some of us went out more than others.

During the making of this record, you had a few band members leave–two before and one during–how did that affect how you guys worked?
It was kind of something we rolled with. It was an unlucky break when Justin left, because he produced the last record. He really played referee between a lot of our fights and really understood us. He was in the band, so he understood where we were coming from and where we needed to be pushed. He had a technical head that a lot of us didn’t, but we just brought in another producer. You try to use what you’re given to work with. We tried to use the advantages of having a fresh producer to get a different sound. That’s all you can do. You make the record from where you’re at instead of lamenting where you were.

Did you enjoy having someone outside the group, Eric Broucek, produce this album?
Yeah. Sometimes it was a bit difficult, and sometimes it felt like he was a little too outside the group and coming from a different perspective, but listening to the record now, after all the fights are done, I think he did some really good stuff on it.

Was there combat between you and Eric?
Yeah, but there’s push and pull between everyone. It’s like he just becomes a member of the band eventually. He’s just becomes another person to fight with [laughs].

Is the fighting an important part of your creative process?
Uh…yeah. I wish it wasn’t. I don’t want to say that it’s the ultimate creative tool and that all bands should fight each other to make a record, but I think if you can learn from the fighting and learn how to fight better so you’re not hurting each other’s feelings and saying what needs to be said. If you’re letting the record be made, and you’re not criticizing it, and you’re not saying what needs to be said, the things you’re afraid to say to your band mates, they’re going to read in the press anyway, so you might as well say them now. I do believe fighting can be a powerful creative tool.

Getting ready for this interview, I saw a lot of videos of you on YouTube just losing it on stage. Do you have a go-to dance move? I noticed the one where you have your arms down at your sides and you kind of shimmy, I guess.
Yeah, I’ll have a lot of people come up to me after the show and say that they can do my dance, and they’ll bust into that one. That seems to be the one that people have glommed onto the most. People from all over the place, unconnected, would call it “The Penguin.” That works for me. That’s cool.