Adapt or Die: Surviving the Era Discover their Voice on Sophomore EP 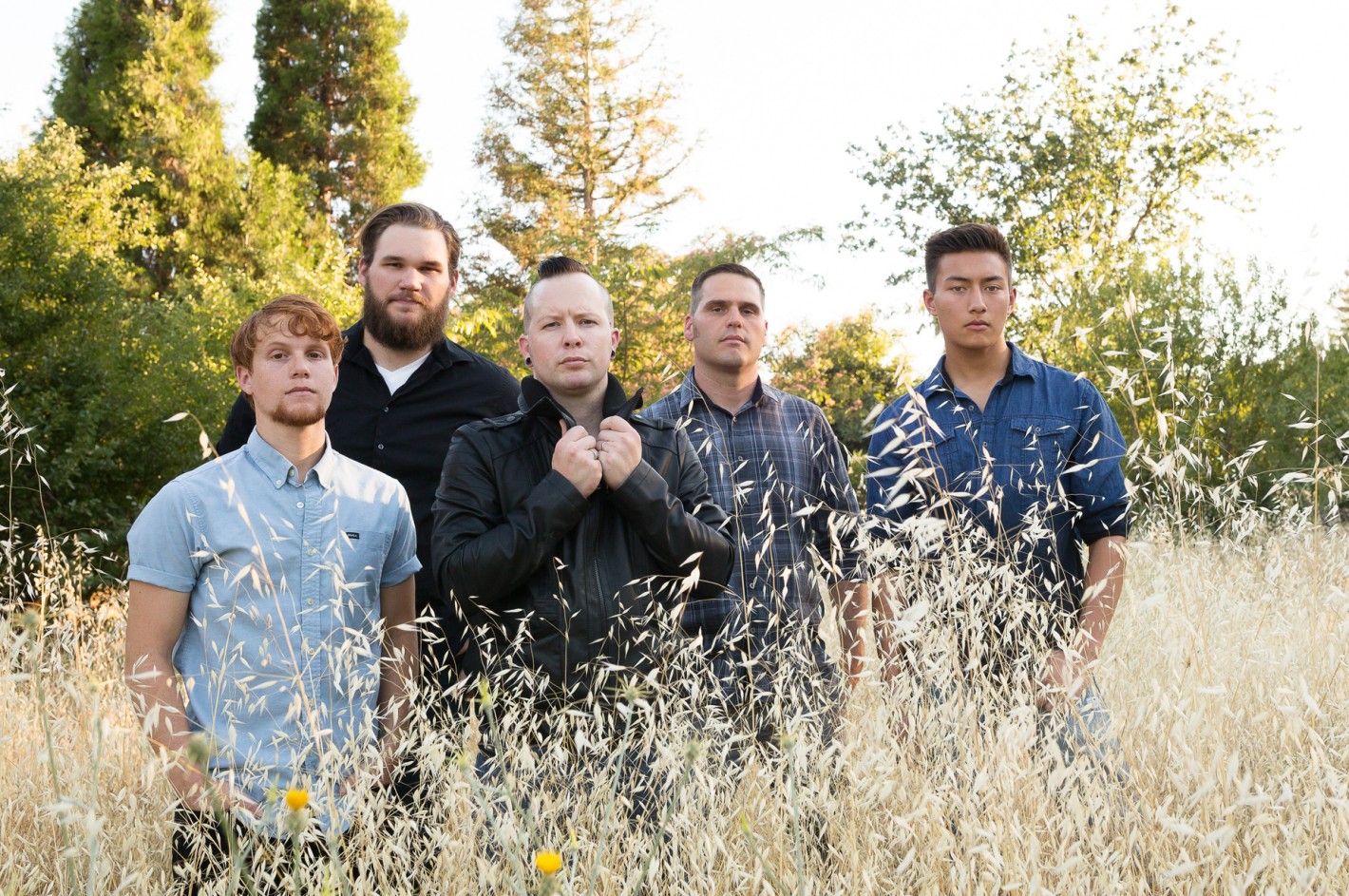 Ryan Sollom’s name might ring a bell. His former band Shortie had quite an impact on the 2000s music scene in Sacramento, and at the time it seemed whether someone liked them or not, everyone had an opinion on the matter. Sollom was much of what made their sound unique, and his talent was evident.

However, in 2006, the group abruptly parted ways, with some members going on to the project Will Haven, while Sollom continued on his own path, first with the band One Dying Secret, and most recently in 2014 with Surviving the Era.

Surviving the Era is due to release their second album, Parallax, the follow-up to their self-titled debut, on June 18. The album, recorded at Little Russia Recordings with Dryw Owens behind the controls, includes the recently dropped first single, with subsequent video, “Queen of the Sea.” Other than Sollom, the group currently consists of Kyle Newton and Kevin Cortez on guitars, Seth Borges on bass and vocals and Jake Cooley on the drums.

When discussing the transition from their self-titled debut to the upcoming release during a phone interview with Submerge, Sollom regarded the prior release as not really being representative of the band as they exist now. “The self-titled [album] … really the first five or six songs, the first batch we ever wrote,” said Sollom. “As we were recording it, we were writing other songs.”

“Pretty much the day it came out it was outdated,” he continued. “We were coming into our own. Our identity was already changing by the time that EP was back and we were putting it out. It was hard to push on people because it wasn’t who we are … It was who we were the first couple of months as a band. Our identity naturally changed. We knew what we wanted to be as far as style of music we wanted to portray and what we wanted as individuals, so [Parallax] is an exact representation of Surviving the Era.”

When listening to the various tracks that make up Parallax, it’s not difficult to find both similarities and differences between the style of Surviving the Era and Sollom’s prior work. His vocals and the recording are far more polished, while the music that backs his vocals has softened a bit, giving off more of an early 2000s emo/power pop feel than the more pop-punk vibes featured in many Shortie tracks. At the same time, Surviving the Era’s tracks are still drenched in guitar-driven goodness, and there are definitely tracks from the old days that line up with Sollom’s most recent work. A good example is “Queen of the Sea,” which would pair nicely with Shortie’s “Every Single Word” off of their 2005 album, Without a Promise.

“I think that naturally with life you change, you adapt. I think Surviving the Era, as individuals, have grown and changed. Circumstances around my life has changed too. The writing has changed. As an older person I can not shun any happy feelings, where when I was younger I was like, ‘Oh, this is happy … I don’t want to write about that,’ where now I’m like it’s a happy-vibing song and happy things come up when I’m writing lyrics, I’ll embrace that. Of course, yeah, things have changed, life has changed, writing songs have changed a little bit, but as far as inputs go for myself, I’ve always been influenced by the same stuff. That’s who I am.”

Prior to Surviving the Era, Sollom was in a project called One Dying Secret, which ended in 2013. He had actually left Shortie to join the band, and while he is no longer involved in the project, they did make it a healthy seven years of existence, which in band years is almost an eternity. Unfortunately, the group tasted minor success, but in the end Sollom was only left wanting more.

“We released one EP officially, put one EP out for free and we ended up going out to Los Angeles and recording, doing some demoing for John Feldmann [Goldfinger, producer for Panic! at the Disco, Atreyu, The Used], and we ended up doing two songs and putting those out for free as well. That was in hopes of landing something for John Feldmann on his record deal, and that went really well. Then, things just kind of fell apart after we got back from Los Angeles. The people in that band just kind of ‘lost their fire,’ if you will.”

If you track the timeline of Sollom’s various projects, from Shortie to the present, you will only find one year where he is not officially in one of the three projects previously mentioned. When it comes to music, this really isn’t an alternative option: “If I found myself not being involved with music, I felt off-kilter,” says Sollom. “I’ve always been involved with something, as an individual I have to be. It’s everything to me.”

When asked whether or not he has ever considered working apart from a group atmosphere, Sollom says he prefers the company of others. “I don’t have enough balls to [work as a solo artist], I don’t think. I love creating with other individuals, because of the aspect of what they bring. I have nothing against the Justin Timberlakes or something like that, but I like creating with people, because that’s how things blossom and take different shapes. You can have an idea and work with someone else and that thing will change to something even better. It keeps things fresh, you get different perspectives. I love creating with other people, it’s just a much better fit for myself.”

Sollom has spent his entire life in Sacramento, with all three of his projects performing a majority of shows in the area. While this does not make him an expert on the local music scene, he definitely has perspective on the subject. When asked about the state of the scene, Sollom echoed other musicians in the area that have recently felt frustrated with the current environment.

“I feel the [Sacramento music] scene is really bad right now,” said Sollom. “A decade ago it was thriving … there was lots of all-ages clubs, lots of bands that would play together and help each other out. I think it was a much more vibrant scene. Now, with how things are ran, from local bands having to sell tickets to draw people to shows … that sucks. People should be able to make up their minds if they don’t want to see you day of [the show]. They shouldn’t have to commit in advance. It’s been ridiculous, and a lot of bands feel that way. So, I think that has hurt the scene. I think the lack of clubs, the lack of all-ages venues hurts the scene. It seems like there’s not a whole lot of bands … I mean, there’s a fair amount of bands, but compared to what it was back in its heyday, it’s definitely a dying scene.”

“I love Sacramento … born and raised,” Sollom continued. “I think even if there was a level of success with Surviving the Era, I still probably would want to live here. I love the fact that Sacramento is not far from the Bay, not far from the mountains … It’s always good weather. The city itself, we have an arena coming in, and that brings possibilities for new music stuff. I love it. I’m a loyal guy.”

The band, due to drop their new album, will continue to develop their live sound as they work toward a full-length album, which Sollom said he would like to do in the coming year. In the years they have been active, they have been quite active in the live scene, essentially playing any place that will take them.

“Last year we played over 100 shows,” said Sollom. “There’s a lot of bands I know that won’t play unless it’s a big show, and that is totally not our motto. We play everywhere and anywhere because we want the experience. We’re trying to build our show ourselves and get as good as we can. There’s no show not good enough or too small. No house shows yet. We would play a house show in a heartbeat. I love house shows. It’s cool because it’s so not formal. We’re down to play, send us a message if you want us to play your house show.”

Parallax will be released on June 18, and you’ll be able to celebrate with the band when they play live that very day as part of a stacked lineup at this year’s First Festival. The mammoth two-day music festival runs from noon to 10 p.m. at Southside Park in downtown Sacramento on June 18 and 19, 2016. Just a few of the other bands performing will be Epsilona, Death of Reason, Sun Valley Gun Club, Tell the Wolves and Drop Dead Red. To purchase tickets in advance, go to Firstfestivalsacramento.com, and to learn more about Surviving the Era, go to Survivingtheera.com.