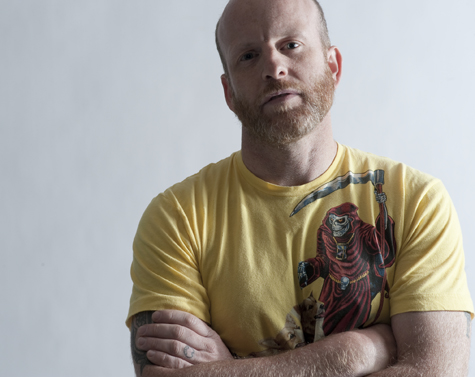 “You know what’s weird is a name came up on my phone. You must be calling from a landline,” said Juan MacLean from his tour bus. When Submerge contacted him for our interview, we did in fact call from a landline. It was a quirky way to start the interview, but set the tone for speaking with a man whose career in music is flavored with contradictions, and we mean that in a good way.

MacLean, or The Juan MacLean or just John MacLean, began his career in music as a founding member of the ‘90s dance punk band Six Finger Satellites, which was signed to the influential indie label Sub Pop. After he parted ways with his band, MacLean eventually reinvented himself as a solo electronica artist. With help from LCD Soundsystem’s James Murphy, MacLean has released a few recordings under The Juan MacLean moniker for another influential indie label, Murphy’s DFA Records. MacLean’s most recent album of original material, The Future Will Come, was released in 2009 and features another LCD alum, Nancy Whang, on vocals.

When he’s not performing his own music, MacLean can also be found touring the world as a DJ. When we caught up with MacLean, he was on the road with Simian Mobile Disco and had just performed dates in Canada. In 2010, he released his first mix album, DJ-Kicks, a collection of modern house music. MacLean said that the process for cultivating tracks for the mix wasn’t as arduous as creating his own music, a process he described as “torture,” but it certainly had its challenges.

“I did spend a lot of time thinking about it, which might not seem like working,” he explained. “Because of the Internet, you can really start chasing your tail, because at some point you realize that you’re never going to have tracks that people can’t just get within 30 seconds, because everything is out there and everyone knows everything. So playing this game of having the most obscure tracks is pretty much pointless at this stage of the game.”

Instead of trying to find tracks off the beaten path, he took a different approach to putting together DJ-Kicks. He didn’t attempt to wow listeners with rare songs, but rather allowed the craft of actually making the mix take center stage.

“My answer to that was first of all to use all vinyl and mix it in the classic way,” MacLean said. “Making a mix live with vinyl–I think it always does impart this human feel to it…”

It’s this inherent humanity that MacLean feels is missing from modern music. Interesting, considering he has made a name for himself in the world of dance and electronica–two traditionally mechanical genres. He explained that the little imperfections and “constantly correcting the mix in the middle of the mix” creates “a more friendly, human feel to the actual mixing.” He likened the experience to listening to old Rolling Stones or Led Zeppelin albums, “where everything sounds kind of off.” As for the auto-tuned, pitch-corrected and quantized music of today, MacLean added, “They don’t sound like human beings anymore.”

In the following interview, MacLean also shared his opinions on the difference between the dance music cultures in the States and overseas.

How is the tour with Simian Mobile Disco going?
Yeah, it’s actually been really good. Even in places like Denver on a Monday night it’s been insane.

Is Denver just not a happening town?
Yeah, it’s usually really bad for all of us. It’s just one of those places for dance music, it’s just really bad. It was crazy. It was packed. I think they were on a lot of drugs.

That helps, I guess.
It does.

You’re on the road a lot. You must have a pretty good idea of what kind of crowd you’re going to get from place to place, but do you get surprises like that night in Denver often?
For sure. It’s mainly in the United States where there are the most wild cards, because most other places in the world, dance music culture is a little more ingrained and established. You really know what you’re getting when you get there–in a good way. In the United States, it’s a battle. It’s just a relatively new thing here.

So it’s just not as ingrained in the culture here as it is in Europe?
Well, there are a few different elements to it. In the United States, traditionally, people who are into live music–rock or indie rock–are not interested in seeing dance music or a DJ in any way. The two things are incredibly divided. I think it’s fair for DFA to take credit for being a big part of bringing indie rock audiences to the dance music world. Now there is a lot of crossover, and it’s not unusual to see rock music and dance music at the same time, or see a band one night and a DJ the next night. In Europe, that’s just the way it’s always been. They don’t understand that kind of fragmentation–being restricted to one thing.

It’s funny because I grew up listening to alternative rock in the ‘90s, and you see clips of live shows back then and people are just jumping up and down and getting into the music, and then when it began to segue into indie rock, the crowds got very still and stagnant. They don’t move at all. You think that’s part of the reason why it’s hard to get the indie kids to come out and dance?
I spent the ‘90s playing in an indie rock band signed to Sub Pop. I just got used to playing a sold out show and looking out and seeing a room full of people with their arms folded. It was also a very male-dominated thing. The audiences were like 80 percent male. Especially in American culture, doing much of anything while music is playing would be considered really gay or something. We live in a very homophobic society, no matter how open-minded people in the indie rock world think they are, when it comes to indicators like that, I think it’s still a really homophobic batch of people. Dance music seems to be a bit more female-driven, in a practical way. If you’re trying to get a room full of people who aren’t dancing yet, girls are always going to be the first ones to dance, because guys aren’t going to be the first ones out there dancing. I think it’s because they’re afraid of being perceived as gay–unless it’s at a gay night, which are always my favorite gigs to do in the United States.

Just because the crowd is the most receptive?
At gay nights, nobody cares about being cool, about being cool in front of other people. It’s just totally removed. It tends to be just people having fun.

I was reading one of the reviews of your live shows from your current tour and the writer was quick to point out that you use mostly vinyl on stage. I thought it was interesting, because the laptop is the instrument of choice among DJs now.
I think people are starting to take notice again, especially in the United States. They’re just not used to seeing people use vinyl. I think when you see someone up there, even if you’re not doing much and just hanging out and listening, which is fine, to watch someone mixing vinyl or to watch someone looking for the next record play, and putting it on and getting the mix right, it just makes the DJ… For one thing, you have to move. You have to move around a lot, you have to always be doing something. It’s even more interesting just to look at than someone looking at a laptop screen. I think there’s a psychological thing now, when they see someone looking at a laptop screen, that image is what they associate with the world of work or down time looking at Facebook or something. I think there’s a psychological process that is off-putting to people, and that’s not even to disparage people DJing with laptops. I have friends who are amazing using a laptop. I’m not. I just can’t do it. But there are also a lot of people who are abusing how easy it is to DJ with a laptop. I think that’s where the trouble comes in.

Does that bum you out a little bit? I guess it could be relative, but I know photographers who really like digital cameras, but they’re bummed that they make it easy for anyone to think they’re a photographer.
It is very analogous to a bunch of fields. Also graphic design–everyone thinks they’re a graphic designer now just because they have Photoshop and Illustrator. It’s actually been a big conversation on this tour with Simian Mobile Disco, because in America, it’s much more prevalent than it is elsewhere in the world. I think you can say the same thing in any of these fields, which is now we have an abundance of people who are not so good or mediocre at doing all of these things, but it does make it even easier for those who are professionals and have put a lot of time and effort into honing their crafts and have real talent, it makes it easier for them to stand out when people see it.

For the DJ-Kicks collection, you made a collection of modern house music. Dubstep has become really popular in dance clubs recently. Was this mix sort of a statement that house is still alive and well?
Well, from the beginning for me, it’s always been an influence. It’s comparable where for James Murphy in LCD Soundsystem, he’s always really been into disco, but LCD Soundsystem songs often don’t sound very disco. It was just always something I was into, especially early Chicago house tracks–some of them were things that I’ve ripped off for years and years. When it came time to do a mix, it was just the most logical thing for me.

You said these are things that you’ve been ripping off for years, is this your way of paying it back?
Yeah, in a way. This is where I’ve been coming from forever, and also I think in the hipster world, people have been into disco for so long, for me, it got really old and tiring. I thought if there was some way to expose people to what came after disco, then maybe that would be a good thing.

Juan MacLean will perform a DJ set at Mix Downtown in Sacramento on April 7, 2011. This will be opening night of a new monthly party Lights Down Low, featuring resident DJs Shaun Slaughter, Adam J and Alx-T. To RSVP for free admission (before 11 p.m.) go to Ldlsac.tumblr.com