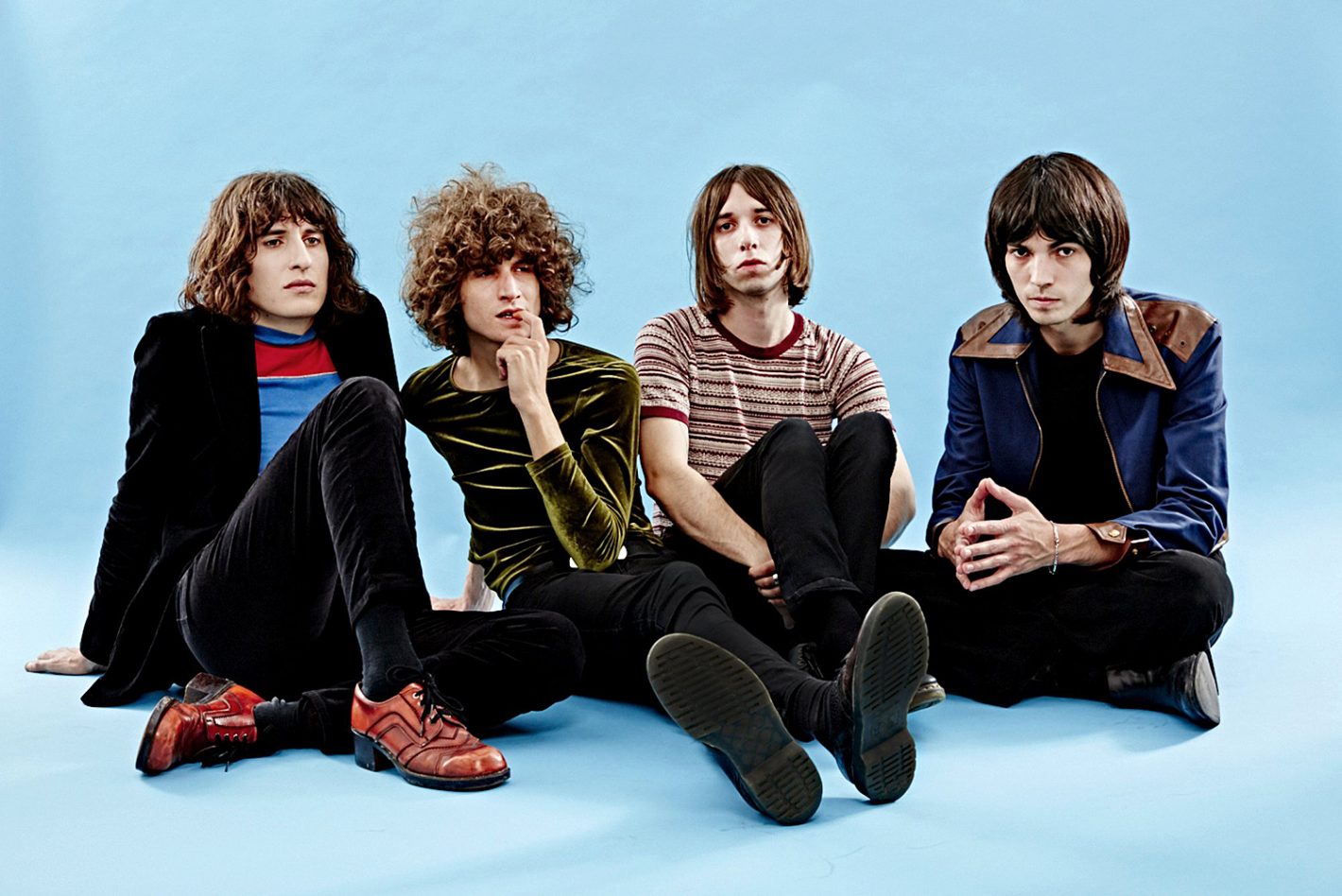 The sun machine fades over the forest; in the absence of celestial glow, earthbound stars light up within the stone walls of a foundry. The sounds of astral guitar flood the former citadel of industry, and the children of the revolution begin their Beltane walk, faces like multicolored mirrors flashing against each other in the swirling half-dark. Upon the stage, walking shards of rock ‘n’ roll light break into a set of numbers possessed of five decades of stylistic exchange, from paisley mid-century pastoralia to hard-sheen ‘70s space glam. It is the first lunar quarter, and the crowd is turned up and turned on. The year, the millennium—all time has become irrelevant …

Regardless of whether or not the above will accurately depict your experience when Temples hit the stage at Nevada City’s Miners Foundry on March 1, there are plenty of reasons to get on the wavelength of this ascendant pop quartet.

Temples began as four lads from Kettering, a mid-sized town in the English midlands, who flitted through various acts, styles and educations before finally coalescing. Frontman James Bagshaw played for Sukie, which garnered a No. 1 spot on the U.K. Indie chart back in 2008. Bagshaw and bassist Thomas Walmsley later played a stint in mod-ish band The Moons before forming the kernel of the mystically titled new group, adding Adam Smith on keyboards and guitar and Sam Toms on drums. Their inescapably catchy 2012 debut single “Shelter Song” proved to have serious legs, gaining them appearances on Ellen and The Tonight Show Starring Jimmy Fallon in 2014. That same year, their full-length debut, Sun Structures, breathed new life into psychedelic dance pop, refining it with state-of-the art production while chipping back the historical mystique to a moment in time —roughly 1966—when it had yet to be sullied by bad-trip freakouts and lurching excessivism. Adam Smith recalls his first encounters with the genre: “It was actually quite late when I started getting into psychedelic music. It was probably when I was about 18. I had always been into The Beatles, as every proper British kid is, really, but when I went to university, I really discovered all the great bands. It was quite a tangible feeling—it sort of felt like I went through my own experience of the ’60s in my head as I went through the music.”

After a few years of constant touring, however, it was time for the Temples’ tonality to undergo a sea change. As last year came to a close, a few peeks behind the curtain were offered from their forthcoming project, Volcano. The new single “Certainty” is the signpost for a new era in the band’s work, complete with eye-catching artwork (visually similar to a three-dimensional toon-town Peter Max come to life) that provides the key to what lies within.

The new album stomps where Sun Structure swirled, soars where the former swayed. It feels less of a nimble retexturing of ‘60s pop and more of a solid statement bathed in the production advancements of the decade that followed.

One major shift is the balance of power toward the deeper end of the sound spectrum. Another is the positive sheen in the new tracks (especially when paired with the artwork, which you can almost hear shimmering on its own).

“We never really sat down and had a talk about doing a more hi-fidelity album, it just started developing that way,” says Smith. “One reason is that we’d been playing live quite extensively for two years, and we gradually realized that the song structures didn’t really have anything below 50 Hz—there was no real low-end. That’s one reason why it might sound a bit more polished this time around. Another reason is that we wanted to play around more with song structure, and not rely on reverb and delays. We’ve stripped back the production technique somewhat. We’ve taken away the clouds and this is what’s behind them.”

Volcano promises to singe away some past influences and be just as dynamic and sense-pounding as its namesake, spiraling outward on prog-like chord changes and mini-fugues that benefit greatly from the overall increase in definition. Remarkably, the evolutionary practices that often take a stable of outside producers to conjure up for a high profile album of this sort have, in this case, been entirely self-propelled. Bagshaw has acted as producer for both this and the previous album, helping to steer the group towards other worlds and epochs.

“I think this way, making Volcano, we’re all proud of what we’ve done, because we’ve changed the sound ourselves. We haven’t had to rely on anyone else’s input,” Smith explains. “It’s just the best way that we work, and I don’t think we even considered working with anyone else.”

Temples’ upcoming show in Nevada City (or San Francisco, if you’re so inclined) promises the best of transcendent entertainment. Sharing the bill as part of the Desert Daze Caravan tour are assorted hypno-rockstars including Night Beats, Deap Vally, Froth and JJUUJJUU. The Caravan tour itself is like a free-floating psychedelic anemone that has unanchored itself from its home base—the greater Desert Daze music festival, which happens every year at the Institute of Mentalphysics in Joshua Tree, Califorina. Now, the western half of the continent can get into something good. Trust us—our skin is psychic and the paper you hold flows from our hands to yours. Are you ready to get experienced?

The Desert Daze Caravan passes through the Miners Foundry in Nevada City on March 1. Tickets are available through Desertdaze.org. You can also check out the tour at San Francisco’s The Chapel on Feb. 22. Volcano drops March 3, and can be preordered now at HeavenlyRecords.com.