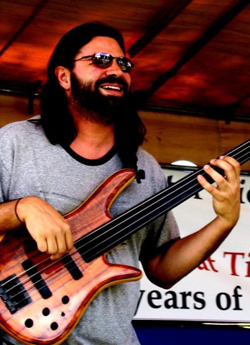 I’ve got a soft spot for instrumental music. I’m really not sure why. Maybe it was the extreme amount of Joe Satriani albums my parents played while I was growing up. Maybe it’s because most lead singers aren’t very good. (That was sarcastic. Mostly.) There’s just something about guitar, bass, drums, keys, etc. doing all of the talking that gets me. The Bumptet is a new group with Sacramento ties that fits this bill perfectly. This jazz-funk trio is made up of Sean Lehe (of the band Izabella, which packs out Marilyn’s on the regular) on guitar, Jonathan Stoyanoff (from Global Funk Council) on bass and Zack Bowden (who tours with Jackie Greene and previously played in Chingus) on drums. They take a cool improvisational approach to their music, which gives it a very loose feel. Their self-titled debut album will see its Sacramento release on April 15, 2011 at Marilyn’s on K where the trio will perform alongside Lake Tahoe’s electro-funk group STC. Show starts at 9 p.m. and it’s 21-and-over. For more information and to sample some tunes, visit Thebumptet.com