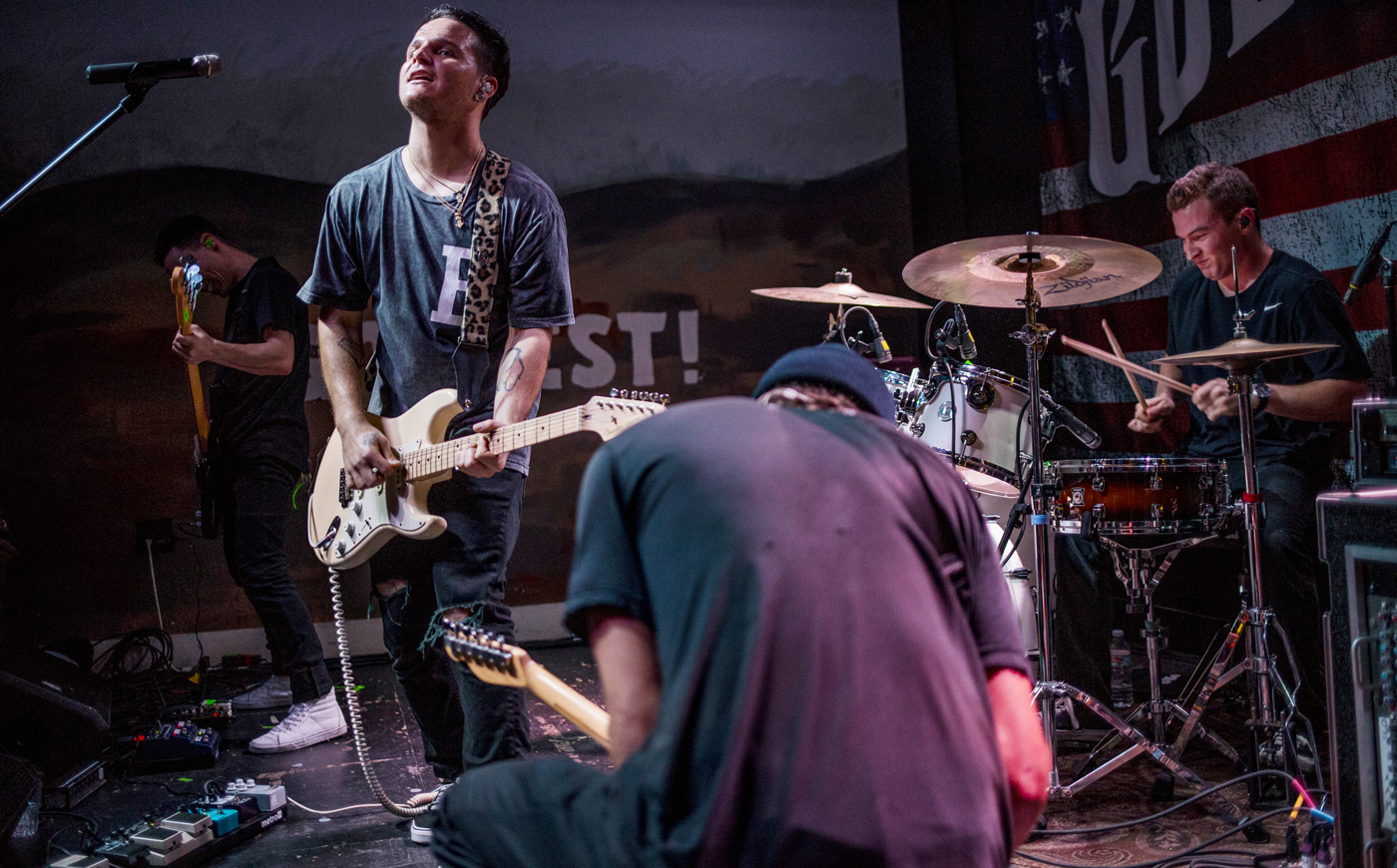 In a room more accustomed to the sound of country music, a reggae roots vibe took hold Saturday night. The usually honkytonkin’ dance floor of Goldfield Trading Post had been taken over by the sweeping guitar riffs of Katastro and the Holdup, and good vibes reverberated through the hardwood hall. Line dancing was replaced by the rhythmic swaying to the jam session happening on stage. The gold mine-themed chandeliers dimmed, the crowd cheered and, with an American flag painted across the back wall, Katastro took the stage.

Katastro, a four-piece band from Tempe, Arizona, came out swinging with a hard, driving instrumental that gave their set the hype it needed. Their six prior visits to our city had taught them how to play to a Sacramento crowd, and the room was full when they hit the stage. They took us on a journey through sound that included memorable moments like reggae covers of a combo of Destiny’s Child’s “Say My Name” and TLC’s “No Scrubs,” as well as Snoop Dogg and Dr. Dre’s “Nuthin’ but a ‘G’ Thang.” They continued by exploring their complete catalog of work; from their 2007 debut EP The Wonderful Daze to their debut album Gentle Predator, and last year’s release Strange Nights, their set left no stone unturned. When they played their latest single, “Flow,” you could tell that the crowd was taking their advice and, “I’mma do a little dance, I’mma make a little love,” and the love was overflowing the dance floor. Classics from Gentle Predator made people feel like they weren’t “Alone,” and that they hadn’t “Fallen.”

San Jose’s native sons, The Holdup, came out with a bang and kept the people moving. The local boys came up playing small venues in Northern California, and they know how to play to the reggae roots style that has became a staple of the Sacramento scene. The smooth rhythms of reggae translated well into the soul-soothing lyrics of Elton John’s, “Tiny Dancer,” and the lighters went into the air while the crowd sang along. Their hip-hop influence mixed with the vibes of the night to give the night a special feeling, and their rendition of “Drugs” had the masses swaying to the beat. “Girls Love Toast,” was met with a raucous applause, and the goofy song full of corny pickup lines still makes me dance and giggle two years after its release. The one-time iTunes No. 1 reggae group played a full set of fan favorites to finish the live music part of the night.

Reggae in a country bar was a complete success. In a room that can often play too loud, reggae played well with the acoustics of the venue. Overall, I believe Katastro stole the show. Their blend of hip-hop and reggae channeled bands such as the Dirty Heads. The crowd seemed to have shown up to see them, and thinned out slightly for The Holdup. While The Holdup still put on one excellent show, Katastro is one of the better live bands I’ve ever seen within this genre. The reggae part of the night ended around 10:30, and Goldfield returned to being the late-night country sensation it is known for being as people flooded in for the normal Saturday night.

The night showcased the flexibility of Goldfield’s ever increasing reputation as a top-notch music venue in Midtown Sacramento, and the ability to quickly change over from live music venue to night club in a moment’s notice. The mixture of the gold rush era/country theme and reggae roots tells a story of two Sacramentos: the modern city with a rich thriving music scene, and the gold boom city that cultivated the future of California.