The Man, the Myth, the Hoff 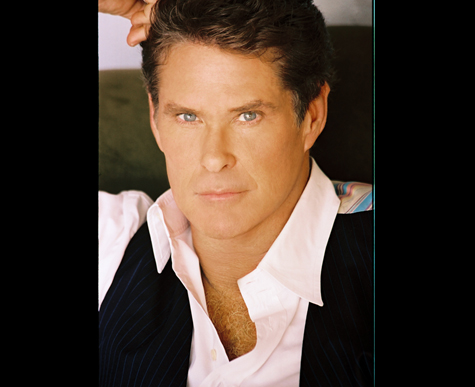 Whether you’re a child of the ’70s and ’80s or a ’90s-born Internet troll, you’ve probably grown up with David Hasselhoff. It’s impossible to understate the footprint The Hoff has left on pop culture, not only in America, but worldwide thanks to his iconic starring roles in shows like Knight Rider and Baywatch. However, his notoriety rose to a different level with the growing influence of the Internet on pop culture and the copious memes and viral videos that populated the World Wide Web.

“Everybody knows me. Everybody does,” Hasselhoff says plainly during our interview. And it’s difficult to disprove that statement. Of course, his rampant fame (or infamy as the case may be) hasn’t come without its pitfalls.

“It’s a pretty wild experience going through life,” he says. “It can be a very positive and it can also be very intrusive and very gut-wrenchingly sad when it affects your daughters. It’s a double-edged sword.”

The darker aspects of his personal life have been laid bare for the world to see, but later this year, Hasselhoff and his family hope to set the record straight, so to speak, with an as-yet-untitled reality show on A&E.

“That’s just not who we are,” Hasselhoff says. “This is my chance and our chance to affect what’s going out to the public in a real way. Like my daughter said—they asked her what the show was going to be about with all the press I’ve gotten—and she said, ‘It’s to prove the tabloids wrong, basically.'”

More than that, Hasselhoff says the reality show, which will begin filming this month, will be a vehicle to help launch the singing careers of his two daughters Taylor-Ann, age 19, and Hayley, 17. In the meantime, The Hoff will be working on his own musical career. The Hofftastic World Tour 2010 kicks off Valentine’s Day at Cache Creek Casino Resort. The show is titled “Retro Rocking With the Hoff,” and will feature many of Hasselhoff’s favorite songs—both old and new—as well as surprises for many of his television fans.

He may be best known in the States for his work starring as Michael Knight or Mitch Buchannon, but overseas, his career as a singer is well entrenched. Hasselhoff says that this upcoming tour is something he’s wanted to do in America for a long time.

“It’s going to take a little bit of work to let people know what I do,” he says. “It’s going to be interesting and challenging, but most of all fun.”

In the following interview, Hasselhoff tells Submerge about his forthcoming reality show for A&E, the Valentine’s Day gig at Cache Creek and informs us that those who attend shouldn’t be surprised if they hear The Hoff channeling Karen O in his performance. Hofftastic indeed!

Is this your first major tour of the States?
Yeah, I toured the States years ago with my show to the fairs, and it was funny. They’d say, “David Hasselhoff?!” But by the end of the show they’d be up on their feet and storming the stage. My band, who is all from Canada and used to touring Germany, goes, “It’s so weird to see people mobbing you and mobbing your limousine, and they’re actually speaking English.”

Is it weird for you to play shows here when people aren’t as familiar with you performing music as they are in other parts of the world?
Well, we’ll find out. When I was in Vegas doing The Producers, Mel Brooks and I would go out afterward, we’d always walk by a lounge and they’d be like get up and sing, and he’d say, “Go on! Sing!” and the lounge would be packed all of a sudden. It was amazing, so I said, “I have to put a show together.” I think people are just coming to see the Knight Rider live, and I think if we deliver a good show—and I think we’ll deliver a great show. We’re excited about it. We sunk a lot of time, and blood, sweat and tears, and money and trying to figure out where to go. We put together 22 tracks and threw out 10 of them, so we have the best 12 left. It’s going to be the retro-rocking night with the Hoff that you’re never going to forget. And we’ve also got stuff in there that no one’s ever seen. We’ve got Baywatch outtakes, and I’ve got Knight Rider outtakes that no one’s ever seen, and they’re worth the price of admission if you’re a Knight Rider fan.

You talk about Knight Rider and Baywatch, and I grew up on those shows, so that’s what I’ll always associate you with, but there’s a new generation of people who are familiar with you because of your prominence on the Internet—with viral images and Web sites. When that first start popping up, what was your reaction to that?
I thought it was unbelievable how the whole world could be connected to each other by one word called “The Hoff.” It was unreal. I first got wind of it five years ago, when I came home from shooting a movie, and it was like two in the morning, and all of these fans were making up Hoff jokes—David Hasselhoff jokes—to get me to appear at a concert in Ireland called Oxygen. All these students from the universities up there were writing Hasselhoff jokes—and they were funny”¦ I kind of just went with it. When I was selling my book in Europe, they would turn out in legions, dressed up as David Hasselhoff or Michael Knight or Mitch Buchannon, and they were wearing David Hasselhoff T-shirts, so I took pictures of all the T-shirts, and then came back and called my license guy and said, “Follow all the bootleggers! They’re making all the money!” So we put out a line of shirts.

You definitely seemed to embrace it. You even named your book Don’t Hassle the Hoff“¦
Yeah, wherever I go now, it’s not even David Hasselhoff, it’s just The Hoff. I just think it’s funny. I just laugh and think how did this happen? I know how the whole thing started, too, because it started in Australia from secretaries. It became an Internet fun thing from secretaries sending pictures back and forth. They wrote me, “How do you feel about being a sex symbol at 50?”—that was seven years ago—and I went, “What are you talking about?” They wrote about this viral epidemic of secretaries e-mailing each other in Sydney, Australia. But it’s fine. If you take life seriously, you take life seriously and then it becomes serious. You have a serious life, but you really don’t want to have a serious life, you want to have some fun.

Do you have a favorite? I liked the infini-Hoff the best—it was like a perpetual image of you in the black Speedos.
[Laughs] I saw that! That was pretty funny. My favorite one got a million hits in Australia—it was called “Wax On, Wax Hoff,” where you could actually wax my chest. I found myself playing “Wax On, Wax Hoff,” trying to get the hair off my own body”¦ It’s almost as if I have a little box, and at night I put The Hoff to bed in the box. It’s a character—not created by me, but embraced by me.

I guess there’ll be another version of The Hoff coming up soon. You’re going to star in a reality show on A&E later this year. Was that something you’ve always wanted to do?
I never wanted to do a reality show, but I did something with a DJ in the United Kingdom, who came to live with me for two days, and part of the gag was to critique my daughters and let them know what it would take to make it on the radio in Europe. This gentleman was named Scott Mills, and he brought my record—”Jump in My Car”—to No. 3 and No. 1 in Scotland and Ireland, simply by playing it and believing in David Hasselhoff. I did his radio show several times, and we became friends. He went on a personal quest to get it on the charts, and he did. So, when he called and said he had an idea to come over, and I said if he could highlight my daughters, that would be great, and he did. I knew my daughters wanted to be singers since they were 7 years old, and this was their time, so I said, “OK, we’ve got to do this now.” So I put them in the studio, and they both worked really hard and had extensive vocal training, and we put out this song. It really worked well, and he loved it. I went, “Wow, this could work, but we really need to go to America.” Meanwhile, A&E had been calling me and they wanted to do something, and I kept turning them down. Everyone advised me that getting radio airplay and launching a record is almost impossible these days unless you have access to the media, and I went bing! I do. So I called A&E, and went, “What about The Hoffspring, or Hanging With the Hasselhoffs—something about me and my kids,” and they loved the idea. They came out and visited us and came by America’s Got Talent, and they realized that we were a loving, tight-knit family—not like what you see in the tabloids and all that garbage. It’s really about following my daughters’ music career and trying to help them through all the ups and downs, and see what happens.

You mentioned going into the studio with your daughters. Is that a difficult transition to go from being their dad to taking more of a business role?
I’ve been doing it for years with myself. I have a studio in the back. At first, they kind of—well, not rejected me”¦but I put them in the hands of people who are really professionals at this, and that’s what I’m supposed to do. If they’re recording in my studio, and we want to get something done, I’m absolutely hands-on. I coach them as I was coached, and they love it. They don’t know anything about recording yet, and they’re learning what it takes, but it’s very natural for us. They want me to be there.

The show at Cache Creek is a Valentine’s Day show, and before you mentioned a tribute to the Rat Pack, but what sort of music do you plan on performing?
I’m doing “Since I Fell for You,” “Feeling Good” and “What Kind of Fool Am I” as a tribute to Sammy Davis Jr. I’m doing the rock ‘n’ roll—”Jump in My Car.” I’m doing a tribute to all the guys I like: Kenny Loggins, The Rolling Stones, Mitch Ryder and the Detroit Wheels. I’m doing at tribute to the new stuff I’m listening to a lot, and that’s Enigma, Shiny Toy Guns and the Yeah Yeah Yeahs”¦ I’m just throwing in all the music I like. I’m going to do some of the Broadway songs from the shows I’ve been in.

Since this is going to be in our Valentine’s Day issue, what’s The Hoff’s idea of the perfect Valentine’s Day date?
If you’ve got someone you’re intimate with already, put the flower petals on the bed. Put the chocolate-covered strawberries by the nightstand. Light the candles. Be as romantic as you can and surprise them. It just seems to work every time, and everyone goes away smiling in the end.

Let David Hasselhoff Retro Rock your Valentine’s Day with his performance at Cache Creek on Sunday, Feb. 14. Tickets start at $45 and can be ordered online at Tickets.com or CacheCreek.com; by phone at (800) 225-2277; or in-person at the Cache Creek Casino Resort guest services desk. 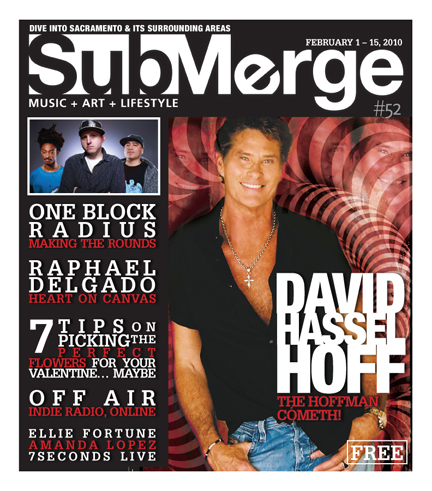