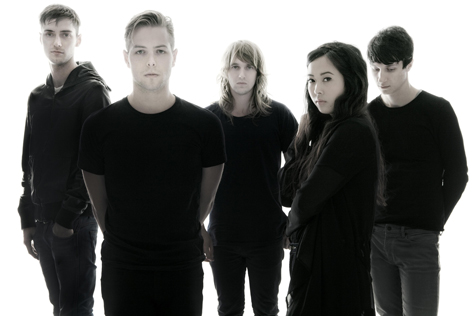 The Naked and Famous’ formula for international fame

Parents often discourage their children from getting involved in creative fields. Rightfully so. Success in music, art or filmmaking is difficult to obtain. Not only is talent necessary, but you need to be thick-skinned and not get caught up in the hedonistic trappings that often surround such pursuits. Parents have no shortage of cautionary tales they can pull from to dissuade their offspring from trying to be an artist. The Naked and Famous, however, is not one of them. In less than a handful of years, the band has already become renowned not only in their home country of New Zealand, but internationally. They almost make it look too easy. Maybe they’re just that good.

New Zealand is a small island nation in the Southern Hemisphere that most Americans probably confuse as Australia. According to Google, New Zealand’s population was just 4.3 million in 2009–roughly half of that of the United States’ largest city, New York, which is where Submerge caught up with David Beadle, bass player for The Naked and Famous, and one of the band’s newest members. The Naked and Famous was set to play a sold-out show at the Music Hall of Williamsburg in Brooklyn later that night. It was one of the last dates in a small tour of the eastern United States, which revolved around this year’s Lollapalooza in Chicago. A short video taken from The Naked and Famous’ performance at the mammoth alternative music (if that’s what it’s still called) festival was posted to the band’s blog on Tumblr (Tnaf.tumblr.com). The video–a quick panorama of the band’s eye view from the stage–was taken mid-set of the band’s performance on that brutally hot and humid Midwestern summer day in early August. It’s a sweeping shot of the crowd and back to the stage, ending on electronics wizard Aaron Short, one of The Naked and Famous’ three main songwriters. It shows a sea of people in Grant Park glued to the stage, arms raised and howling despite the sweltering temperatures and downpours. It was a transcendent moment not entirely lost on Beadle, who, when we spoke, was still trying to process the magnitude of it.

“Honestly, my knowledge of Lollapalooza was the episode of The Simpsons, where Homer gets shot in the stomach,” Beadle joked. “I know Lollapalooza is a massive festival, and big bands have played there. Alice in Chains played it in 1993 when it was a traveling festival. For us to be able to play there had been an amazing opportunity–and very surreal.”

Surreal is an accurate adjective for Beadle’s life since joining The Naked and Famous. In February 2011, the band left their hometown of Auckland, New Zealand, and have relocated to London, though Beadle said that he and his mates “haven’t really lived in any one place at all since then.”

“We’ve spent enough time there to get a feel of the place,” Beadle clarified. “Where we come from is pretty quiet–comparatively. It’s a quiet beachside town. London’s a huge, massive, bustling city.”

Though they may not have spent much time there so far, The Naked and Famous have already become accepted in their new home. The United Kindgom’s NME awarded the band its coveted Philip Hall Radar Award, which is given to promising up-and-coming bands. So surprised by the award, co-lead vocalist and songwriter Thom Powers remarked in his acceptance speech, “Thank you very much. I’m not even sure anybody even knew who we were here. We’re not from around here, but cheers!”

“It’s really interesting, because there’s no comparison in New Zealand,” Beadle said. There’s no NME, there’s no BBC. When we found out about that, like, none of us really knew what to do, what the consequence of it was or anything. We had to sit down and Google it and find out who the other artists were that we were nominated alongside. If anything else like that ever happens again, we’re probably going to have to Google it.”

“We never had dreams of grandeur in that respect,” he said. “We all wanted to be musicians, and we all wanted to have that as a career, but to expect that was amazing.”

While the Philip Hall Radar Award may not have been familiar or expected, The Naked and Famous have become no strangers to accolades in their short existence. The band’s debut full-length album, Passive Me, Aggressive You, available through Universal Republic in the United States, has consistently charted in the top 100 globally, but in their home country, The Naked and Famous received a rare distinction by topping the pop singles chart with the utterly infectious “Young Blood,” which propelled Passive Me, Aggressive You (released Sept. 10, 2010) to No. 1 on the New Zealand albums chart. They were the first homegrown band to do so in 16 years. Beadle said that New Zealand’s Top 40 is usually dominated by American and British artists. But The Naked and Famous’ heady electropop, infused with the snarl and explosiveness of ‘90s era alternative rock, helped the band buck that trend.

“To be amongst the Katy Perrys was really strange, but it was especially strange for us because we’ve been around since 2008, and all we wanted to do was get in the Top 10 of college radio/alternative, to be No. 1 on that would have been a big deal,” Beadle explained. “When ‘Young Blood’ was released, that’s what we were expecting. We were like, ‘Hopefully we will get to the top of the college/alternative chart.’ But then we had our managers calling us and saying, ‘You’ve got to come down here and have a beer. You’re on the top of the pop chart.’ We were like, ‘What does that mean?’ It took a long time to sink in for us. They were really excited, but we were like, ‘OK, but can you just wait until work’s over? I still got another three chapters to read.’ It wasn’t registering for us.”

What it all ended up meaning for the band was their songs in popular U.S. TV shows such as Degrassi and Gossip Girl and numerous trips around the world. Not bad for Beadle, who before his time in The Naked and Famous, played in metal bands around Auckland, as did Powers and drummer Jesse Wood. The latter two, Beadle said, have been known to bust out Deftones songs during sound checks (Powers named White Pony as his favorite Deftones album).

“We all grew up listening to ‘90s alternative rock–Tool and Deftones,” Beadle said. “That kind of stuff. When you grow older, you grow into new things.”

Beadle said that The Naked and Famous have already started working on new material. The band recently had time at a studio in Wales. He joined the group along with Wood just around the time when Short, Powers and co-lead vocalist and songwriter Alisa Xayalith were beginning to work on Passive Me, Aggressive You. Beadle admitted he didn’t have much to do in the writing of the album, but things may be different when the band comes to compile a new one.

“For this next record, because we’ve been with each other now for about two years, we’re able to have demos set and work in a room together, and come together that way as well,” he said.

Beadle called the songwriting trio of Powers, Short and Xayalith inspiring and prolific. Considering that they have already produced two EPs and a full-length album in just a few years, those adjectives may not be hyperbole. Though the new material Beadle and company had worked on in Wales is most likely still in its formative stages, he said that the band wasn’t making any radical tweaks to its sound just yet.

“Passive Me, Aggressive You is different from the first two EPs, but we’re coming now to formulate a very solid sound that we’re all happy with, so that will continue,” Beadle said.

It would be difficult to argue with those sentiments, considering The Naked and Famous’ success thus far. Parents, if you want to scare your kids away from wanting to be rock stars, you may just have to find examples elsewhere. 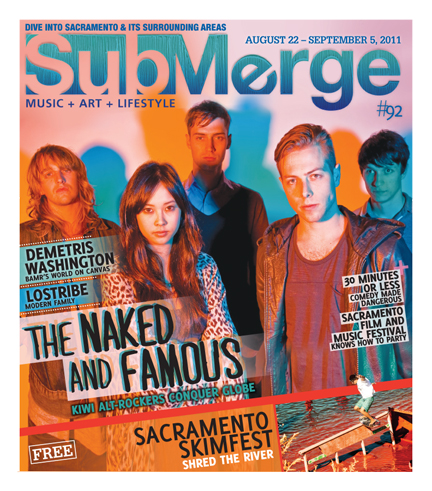 The Naked and Famous will play Harlow’s in Sacramento on Aug. 31, 2011 with White Arrows. Tickets are $15 and can be purchased through Harlows.com.