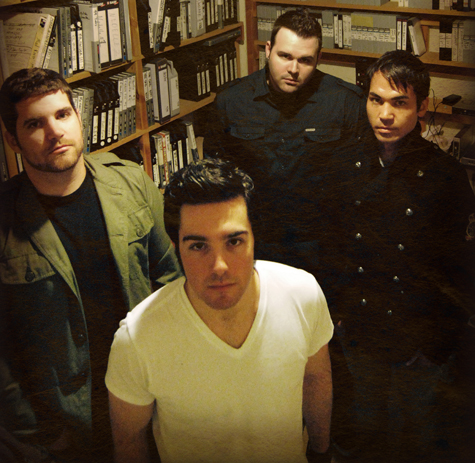 Some of Sacramento’s favorite sons have returned with new music recently. Deftones battled back from bass player Chi Cheng’s coma to release a new album and Far rose from the dead to release their first new album in over a decade. Local electronica-laden post-hardcore band Eightfourseven hasn’t been on the shelf for quite as long as the latter, but in the what-have-you-done-for-me-lately world of music, four years can be an eternity.

Regardless of time off, Eightfourseven is looking to be back in a big way. Their upcoming album, Lossless, was recorded at Red Bull Studios in Santa Monica, Calif., and mastered by “Big Bass” Brian Gardner, whose work has enhanced albums by heavy hitters, ranging from Alice Cooper to Dr. Dre. According to bass player/programmer Anthony Sarti and guitarist Sean Bivins, the experience of working with such a seasoned pro wasn’t lost on them.

“Being in his studio with Platinum plaques from Gwen Stefani, No Doubt and stuff like that, we kind of, for the first time, shut up and just listened,” Sarti says. “We never had a problem before, but in the past, we’d put our two cents in.”

“We were all sitting in the back quiet,” Bivins added with a laugh.

Eightfourseven didn’t necessarily want Lossless to be a four-year project; the band just wanted to do the album their way. In the time between this release and their most recent, Silent Raid, the band had a few opportunities with management companies who wanted the band to rush into the studio to record, but Eightfourseven preferred to take its time, though Sarti says these differences in vision were a minor roadblock that delayed the completion of Lossless. Scheduling time at Red Bull Studios, and traveling from the Los Angeles area to Sacramento also played a big factor.

“Our last CD, we put out ourselves,” Sarti elaborates. “Now we’re on Minus Head Records–as of September. They were cool to let us baby this project and make it the way we wanted to.” Sarti says that though the songs written are two years old, they’re still fresh for the members of the band. “The songs are a couple years old to us, but I think that holds true why it’s still good. I still like the songs. I’m still excited to play them.”

Obstacles cleared, Lossless is ready for prime time, and may very well be a harbinger of things to come for the group. In the band’s most recent bio, singer/guitarist Lance Jackman said of Lossless in comparison to Silent Raid, “While Silent Raid was a little more traditional, Lossless is less of a regular rock album. It takes more chances, and it’s just a sonic wall.” Listening to the album, Jackman’s words ring true. Hard-hitting guitars and vocals are pulled through a digital wonderland of sounds, rushed along by big rhythms and shifting time signatures. In a recent interview, Sarti and Bivins discussed the new album as well as some of the band’s history.

You’ve been around since 2002; has the lineup been intact since then?
Sean Bivins: Yeah, it’s always been the four of us.

Lots of bands will have changes in that time. How have you kept it together?
SB: It’s kind of like a marriage. Obviously we have problems, but the ultimate goal of the band is what the four of us do together. If any of us changed out, it would be different. Change out our drummer, change out the singer, change out the bass player, the whole mix changes. It’s not Eightfourseven anymore. The ultimate goal is always to do the music that the four of us like and agree upon. That’s why we haven’t changed anyone out.
Anthony Sarti: Like Smashing Pumpkins, ever since it hasn’t been the full lineup, it hasn’t been the same. I saw them on television a month ago, I said to myself, “I want to change the channel. I’m not even interested,” but if I saw James Iha [ex-Smashing Pumpkin guitarist] up there, I would’ve been all into it.

Sean, you play guitar, and Anthony plays bass and does a lot of the electronics. Does it start with the guitar and then do the electronics come after?
SB: Most of the songs start with some basic guitar rhythm–basically a sketch of what the song is going to be. Then it just keeps getting layered upon, so it’s like if we were practicing something at our practice spot, just something new, and if Anthony hits something cool with a bass line or on the keyboards, things will change. Things are constantly changing, even while they’re being recorded.
AS: Most of our songs start with a riff that Sean did, and then we put them into a song formation, but there are a couple of straight electronic songs that were in that vein from the beginning, but most of our popular full-band songs start from the ground up.

Listening to the upcoming album, it sounds like everything meshes together really well, and there’s a lot going on. Nothing sounds like it’s competing. Is there a lot of push and pull involved to keep the original intent of the song, or is that even a bad thing if the original riff gets a bit lost and something else comes out of it?
AS: I think that’s what happens. Things change so many times, and everyone has a strong voice in what happens and what doesn’t happen. If there’s something that’s put in the wrong direction, we normally fix it. There are a couple of songs where the original riff is so buried in it, it’s like “OK” [laughs]. But the way it’s mixed, you can still pick that out and just focus on the guitar.
SB: There are obviously compromises made for the better. Say if I write a riff, and I have the intention that it’s going to sound like this, in this direction, and everyone else comes in and plays their parts. The three of them add to it, change it, move it in a different direction, then it’s me going, “Do I like the way it’s going? Does it sound better?” It’s hard to tell from your own one perspective.
AS: As far as how the electronics mix in, I always try to work back and forth with Ben [Conger, drummer], so that where the acoustic drums leave off, the electronic part will pick, so the beats complement each other, not overpower each other.

Now that the record stands to be released, have the songs changed a lot between when they were first written two years ago and now?
SB: They’ve changed a little bit as far as the extra layers that get put over it. The whole basic sketch for the song, the bone structure, is still there. Things got moved around a little bit, some vocals got changed, and it was nice to have the time to actually do it and have the time to think about it.
AS: And that’s why we called the CD Lossless, because we took that time off to perfect the product that we were going to put out, instead of just rushing it out. The songs changed, but it was so spread out that we learned all the changes, and I can’t even remember what the originals sounded like.
SB: They’re like 3-year-old children now. They’re a little grown up.

It’s a neat time in Sacramento now. Deftones just came out with a new record and Far is back together with a new record, so it seems like there’s a lot of good stuff happening in the scene. How do you guys think you fit in with what’s going on in the Sacramento scene right now?
SB: As a band, it’s not your job to make a CD or an album for what’s going on now. We’re just trying to make an album that shows all the stuff that we loved growing up. If people like it, which I hope they do… If one more person likes our CD and comes to our show, that’s one more person that likes to go see live music. That helps the scene out.
AS: When Far stopped playing back in the day, I remember the end of it. We were always wondering what it would be like if they came back, so now it’s sort of like a weird dream. Next, Refused will get back together.

Refused is one of the bands I thought you shared some musical similarities with.
SB: That’s one of those bands that just made a classic record [The Shape of Punk to Come]. Anyone who hasn’t heard it should, because it’s just amazing. 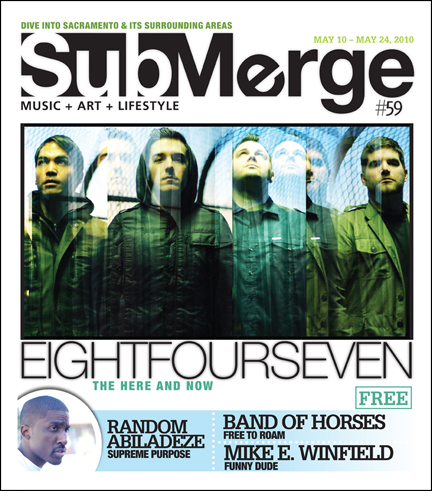 Check out Eightfourseven as they celebrate their CD release with a show at Harlow’s on May 28. Also on hand will be By Sunlight, DJ Whores, Dusty Brown and DJ Blackheart. Lossless will be available at the show and also online at the band’s official Web site, www.eightfourseven.com. Digital copies of the album will be on sale June 22 on iTunes.