Sacramento produces some odd bands. From the barbaric yawps of industrial-rap duo Death Grips to the hedonistic dance-rock in short shorts of !!!, Sacramento has never had a concrete “scene” in the usual sense. Sure, there were a few smatterings of crust punk and that unfortunate period in the mid-‘00s where it seemed you couldn’t go to a venue without hearing Christian hardcore, but no one genre has ever truly dominated the scene. So it makes sense that math-rock band The Speed of Sound in Seawater would spring through the cracks in the concrete and onto the national stage. The Speed of Sound in Seawater is alternately geeky and totally badass, and it’s this awkward dichotomy that makes them so interesting and, well, completely endearing.

Everyone in the band looks like the quintessential laidback 20-something college student, which makes sense because two-thirds of the band is still going to school between tours. Damien Verrett just graduated from UC Davis with a degree in technicultural studies, bassist Luke Ulrici is currently studying microbiology and drummer Fernando Oliva is studying architectural design. These aren’t the easiest majors but it makes sense to have smart guys in a math-rock band.

On a recent visit to the band’s practice space (guitarist Damien Verrett’s parents’ house in deep Elk Grove suburbia), the living room is crowded with amps and instruments. The guys pick them up, and, after fiddling with a Mariah carey sample, Verrett looks over to Oliva, who counts off. And the band just goes.

The first thing you’re struck by is the technicality of the music and how seamless the transition is from their recorded songs. The beats are crisp, the melodies are spot-on and the band simply motors like it’s another day at the office. It’s like it’s not a big deal that Verrett is shredding with the frenetic energy of The Fall of Troy or that Oliva is beating every inch of his minimalistic kit to create the thundering, jittering rhythms that hold the intricate workings of the song together. But in between the complexities and musicality you find yourself humming along to the fat, glimmering pop hooks in songs like “Lots of Love for Logan,” and “The Oddest Sea.” Verrett’s crystal-clear voice brings comparisons to Circa Survive’s Anthony Green or even to some more pop-y indie acts like Freelance Whales or even Ben Gibbard. All these disparate elements blend and shift, and work in a way that doesn’t quite make sense, but is incredibly intriguing. And that’s The Speed of Sound in Seawater’s charm. The band is utterly without pretension, they’re simply really good friends who make really, really good music.

The Speed of Sound in Seawater is a band that readily rejects most, if not all of the typical rockstar clichés. There’s no band drama, the guys don’t party (“I’ll drink a little bit but then we have to get up and drive for 13 hours, so I can’t really drink that much,” Verrett said). They don’t have groupies (“It’s really just a lot of like really young girls and some old creepy guys, which is kind of disturbing,” Oliva said). They just come together and rock their balls off. And that is exactly what they did when they came together in August to record their first proper LP in Seattle, First Contact.

“I just wanted it to be really polished, really clean where you still have that verse-chorus structure but with some different elements thrown in to keep it interesting,” Verrett said.

This marks a departure from the band’s previous, admittedly brotastic, method of simply jamming out songs until they worked.

“Before, we would really just kind of feel out the songs and the time changes on the fly. It was super stressful,” Oliva said.

“It’s like one time it’ll be really good and the rest of the time it’s just going to be awful,” Ulrici said.

But this change to a more structured approach has not been without its detractors. The band has gotten a few calls from their “fans” to return to their older, more chaotic style that was present when they released their first two EP’s, Blue Version and Red Version, four years ago.

“It’s like you spend hard-earned money, you work for hours and hours writing and practicing, and then you go to a really nice studio to put out the best thing you possibly can. And then some stupid idiot on the Internet just goes, ‘well, it’s not as good as that one song you wrote in two hours and recorded in your fuckin’ bedroom.’ It’s just frustrating,” Oliva said.

But these small hiccups seem to just be growing pains for a band that is attempting to plan a national tour for the summer.

“I think every band goes through something similar,” Verrett said. “We’re just growing up I guess.”
“It’s just about writing good songs and good melodies. It’s about musicianship rather than just being like world’s best fucking drummer!” Oliva said.

The new approach seems to have paid off as First Contact is easily the band’s catchiest and most polished record to date. The technicality of the math-rock element of the band is still preserved in songs like “Soulmate 2.1” and “Anyanka,” but these sections are interspersed with hooky vocal melodies that give the tracks some breathing room. Instead of unhinged, frenetic jamming, the songs feel like songs. The dynamics build, ebb and flow. One of the highlights of the album, “The Macabray,” even takes a few interludes with violins, accordions and clarinets to build and layer the song brilliantly. It is in these instances where the technicality is honed to a heartbreaking point, that the band’s gift for writing simply beautiful music shines through.

This is not to say that The Speed of Sound in Seawater has given up the immediacy that made their early works so enduring in the eyes of their fans. The stomping payoff to “Apples to Apples, Dust to Dust” is as great a crescendo as the band has ever written. And if that isn’t enough, the band still uses their prog-y, rowdy shout-along “Hot and Bothered by Space” as a bombastic live finale.

Overall, The Speed of Sound in Seawater is simply a brilliantly talented band that somehow manages to stay humble even at the onset of their wider success.

“Honestly I get more excited to meet the fans than they are to meet me,” said Oliva, “I still get stoked when we’re hanging out in a parking lot in Oklahoma or something and somebody comes up to me and goes, ‘I drove six hours to see you guys and you fucking killed it!’”

“It’s like someone will get a tattoo and I’ll be like ‘Let me take a picture so I can show my mom!’” Verett said with a laugh.

The Speed of Sound in Seawater is still a young, growing band but look to see these guys blow up in a big way. Sacramento is lucky to have them, for at least a little while longer.

Start the New Year off right with The Speed of Sound in Seawater when they play what is sure to be a must-see show at Luigi’s Fungarden in Sacramento on Jan. 2, 2014. It will be the first show of the band’s Unsinkable Tour, so be sure to send them off properly. Feed Me Jack and Paper Pistols will also perform. 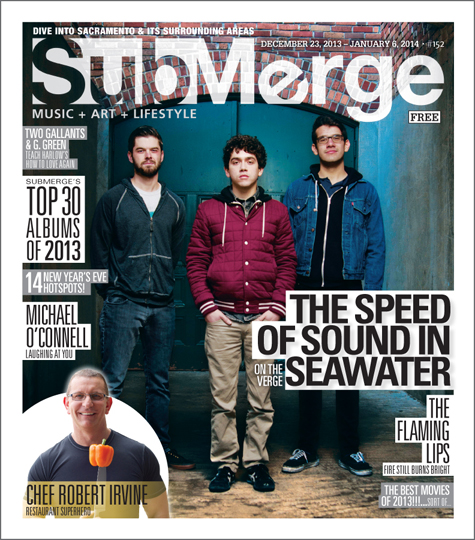