Midtown on a Monday night in February: The populace is off work, up for perhaps a few drinks and a quick bite at a local gastropub, but mostly craving the soft embrace of their couches and the soporific allure of their full Netflix queues. Let’s face it—the average Sacramentan just wants to be sedated; but Colleen Green, a Los Angelean by way of Boston and emergent stoner-punk extraordinaire, has other plans; she wants to be degraded.

She shreds along to the old tune by the Ramones, lyrics rearranged to reflect her favored brand of self-effacing irony. She stands completely alone onstage behind a pair of dark sunglasses, factory-setting drum machine loop and guitar painted with “Happy Birthday Jeff” in colorful letters. Even with the pared-down aesthetic, she manages to exude an effortless cool, the same cool to be found in abundance on her various independent releases, most notably her latest full-length, 2013’s Sock It to Me. 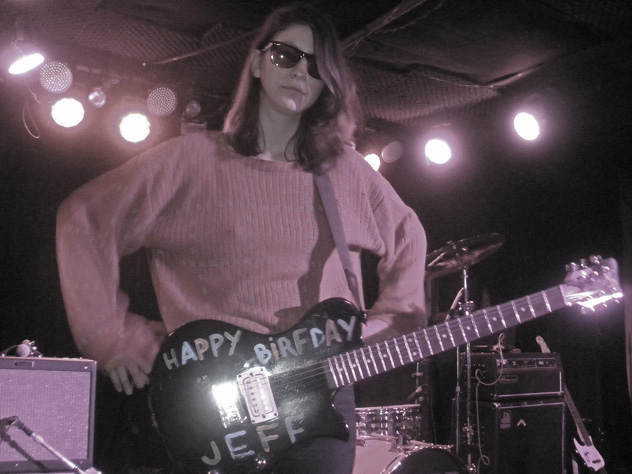 From the outset of her performance, Green strikes a split figure, indebted to both her East Coast origins and adopted West Coast home. The former Green is old school street punk, a thin coat of ennui stretched over a nervy, raw energy befitting the Kim Gordons and Patti Smiths of the New York scene. The latter is pure pop, a one-woman girl band destined to lilt well-crafted melodies beneath the perpetually sunny skies of Southern California. The sound is timeless, and has seen a lot of good usage in the lo-fi-revivalist climate of recent years, most notably by Bethany Consentino of Best Coast. But Colleen Green is another step down the rabbit hole. You can sense a gray cloud over her Venice Beach, and feel a razor beneath the pristine sand.

The sizeable audience at Harlow’s seems to appreciate both sides of Green; unlike some oddly paired opening acts, it’s easy to understand how she fits into tonight’s affair. Her songs are a perfect build-up to the main event, with mid-tempo ballads like “Every Boy Wants a Normal Girl” and minimalist numbers like “Sock it to Me” priming the audience’s appetite for tight hooks, and acting as a slow-burning fuse for the punk explosion we expect from The Thermals.

And who, to the uninitiated, are The Thermals? How about three generations of punk condensed into one insuppressible trio, who, now one decade and six albums into their career, have encompassed every flavor and concern of the genre—death, optimism, religion, politics, fear, self-reflexivity, self-release—and show no signs of exhausting their seemingly unlimited reserves of energy and abandon.

Lead Hutch Harris, bassist Kathy Foster and drummer Westin Glass power through 20 tracks altogether, rarely catching a breath before launching into another tuneful attack. It appears they can chug through a set list faster than The Ramones, glide along with more romantic pop sensibility than The Killers, and still pack in more chord changes and lyrical themes than your average concept song by The Decemberists. The crowd presses in closer—we can’t get enough.

From the victory cry of “You Will Be Free”; the sing-along groove of “Now We Can See”; and the electric, always crowd-pleasing set-closer “A Pillar of Salt,” not a chord or beat is missed. Harris’ voice is a commanding yet anxious tremolo, punctuating the endless stream of chords, repeating lines twice to add intensity. At these moments, his eyes open in a crazed flare, we feel as if we’re being personally addressed, becoming co-conspirators in his battle cry: “We built too many walls…yeah we built too many walls!”

Standing opposite onstage, Foster is cool as a bullet, her signature updo keeping the beat as she nods along. Harris is making the bold claims, and Foster is backing up each one. Together they produce an outrageous yet credible reaction to the onslaughts and insults of the world.

Earlier in the set, a small-statured young lady approaches the proscenium to make a modest request: “Could you play ‘Everything Thermals?’” Maybe I catch an eye-roll from Harris here. This is a joke-song the group bashed out early in their career, a song that will always follow them, near or far, wanted or not. Every band has one. But, miraculously, they return with it as an encore. The girl is ecstatic. They shred it with the same enthusiasm as their last 20 songs. The world is at peace. How good can a Monday night get?

Pretty good, I answer to myself, but can’t help but wish there were more to join us in the exuberance. When will the unrealized potential of the Sacramento audience wake up to the treasure we have on our hands? Sure, It’s not like I’d enjoy being pressed into an unwashed mass packed way beyond fire capacity, but come on; the scene wants you, every day of the week. The thrills I have described above constituted a $12 fee. When I walked in, Colleen Green was manning the sales table and Kathy Foster was having a casual chat with a few audience members in the middle of the dance floor. “In a world…” the movie trailer might begin. But that world is here.